“I think his explosion, I think I have similar athleticism like him, and, (although) I am bigger than Russell Westbrook…I think that I can still do some things like him,” Stanley said matter-of-factly, as though there’s nothing special about being taller than and athletic as a four-time NBA All Star in freshman year of high school.

There was something special, however, about the night of December 4th, 2015. That Friday night, a star emerged. Taper Athletic Pavilion was a solar system and Stanley was a supernova, exploding in the first home game of his high school career. The new era had officially begun.

In that game against Heritage Christian, Stanley was a human highlight reel, throwing down four dunks as a packed Fanatics section collectively lost its mind again and again.

That night, the atmosphere in Taper reached a level of fervor previously reserved exclusively for when Loyola comes to Coldwater Canyon. After the game Stanley took to Facebook to thank the Fanatics, and the responses rolled in.

Standing at 6'5", Stanley is two inches taller than the 6'3" Westbrook.

Whenever Stanley rocks the rim, it's nearly impossible to ignore. It's as if he is the only one in the gym who can keep a straight face in the aftermath of a mixtape moment. He doesn’t celebrate; he hardly acknowledges his dunks, like an action movie hero walking away from an explosion without flinching. This quality holds the origin of his nickname, Smooth Operator, which was given to him over this past summer.

“One of my close friends was like, ‘I love the way you’re on the court because, you know, you operate so smoothly, and then just out of nowhere you’ll just dunk on someone. And your reactions, you don’t even have a reaction, you just keep running down the court like nothing happened’,” Stanley said. “I didn’t really think much of it until he started calling me and texting me like, ‘what’s up, Smooth Operator?’ and it was just like, ‘alright, I’ll just start wearing it.’”

Although he doesn’t show it, he knows that dunks are really worth more than just two points on the scoreboard.

He may not react to his dunks in real time, but if you show one of them on ESPN, the Smooth Operator becomes considerably smooth. That's what happened when he found out he was on SportsCenter’s Top Ten plays this June, for replicating Vince Carter’s “cookie jar” dunk.

“It was crazy,” Stanley said. “I had a lot of people texting me and calling me like, ‘you’re on SportsCenter!’ At the time I wasn’t home and so I was like, ‘can someone record it for me?’ and once I saw it I just went crazy. I’ve always wanted to be on SportsCenter so to hit SportsCenter now, it’s just crazy.

Two days later, he announced that he would be transferring from Sierra Canyon and attending Harvard-Westlake for high school.

Some raised their eyebrows at the decision. Why was one of the country's most talented prospects choosing to play for a team that had lost in the CIF-Southern Section quarterfinals for four straight years when he could have stayed at Sierra Canyon, a top 20 team in the country* and the defending Division V State Champions? Why was he taking his talents to Studio City when he could have taken them to Findlay Prep in Nevada, the perennial high school basketball powerhouse that made the semifinals of the prestigious Dick’s Sporting Goods High School Nationals tournament and is ranked the #1* in their state?

Stanley cited three reasons: his uncles are alumni and pushed for him to attend their alma mater, he loved the feel of the campus, and was a big fan of then newly-hired Boys’ Basketball Program Head David Rebibo’s coaching style.

“I love his fast tempo,” Stanley said. “He doesn’t want to slow it down, he doesn’t mind a run-and-gun offense.”

Rebibo up-tempo offense requires rigorous conditioning, a big reason that it wasn’t smooth sailing for the Smooth Operator in the beginning of his Harvard-Westlake career, both on and off the court.

“It’s been tough, I’m not gonna lie, it’s been one of the toughest basketball off-seasons I’ve ever been through,” Stanley said. “It was tough in the beginning. I think it was tough for me academically, more than anything, but I think I just started to clamp down and do what I needed to do, like meeting with teachers and less socializing and it helped me.”

* - Rankings according to MaxPreps.

If the beginning was the most difficult part of Stanley’s journey, it didn’t show. The Wolverines went 15-0 in their summer league.

“Every day he’s growing, he’s maturing, he’s filling out, he’s getting stronger, he’s working harder, both in the classroom and on the court and I think it’s showing,” Rebibo said. “He’s starting to get in a little more of a groove, high school is an adjustment and especially when you come from a different…school than Harvard-Westlake there’s an adjustment period and I think he’s done a great job handling that…I think our school has done a great job welcoming him and supporting him.”

Stanley’s teammates have helped to make that transition as easy as possible, acting almost like family to him.

“They’ve taken me under their wing, they’ve been showing me the dos and don’ts and taken me through the ropes,” Stanley said. “If I need any advice I just come to them, they’re like my bigger brothers.”

One of those “big brothers,” starting shooting guard Ali Iken ‘17, had been playing against him since fourth grade. For Iken, playing on the same team is a nice change.

“I’ve known how good he is, so it’s just going to be fun playing with him instead of against him,” Iken said. “Lucky for me I was never tall enough to guard him, so it was usually another player, but definitely his athleticism, his ability to jump, to run [make it difficult to play against him]. It’s very hard to find kids like that these days.”

Iken reaped the benefits of playing alongside Stanley in the the home opener, leading the team in scoring with 22 points, partially because he was often left open.

“[The best asset of Stanley’s game that makes the rest of the team better is] his ability to draw attention away from everybody else, especially me, because most teams don’t like leaving me open, so they try to face-guard and stick with me,” Iken said. “but with Cassius on the floor, whenever we run the pick-and-roll they have to make a decision on who to guard, and it frees the other one up, so it’s easier for me to get my shot off, easier for him to attack the basket without getting double- or triple-teamed.”

[The best asset of Stanley’s game that makes the rest of the team better is] his ability to draw attention away from everybody else, especially me, because most teams don’t like leaving me open, so they try to face-guard and stick with me,” Iken said. “but with Cassius on the floor, whenever we run the pick-and-roll they have to make a decision on who to guard, and it frees the other one up, so it’s easier for me to get my shot off, easier for him to attack the basket without getting double- or triple-teamed.

Coming into the home opener, Stanley led the team in both points and assists, the latter of which could be attributed to his ability to move the ball. Stanley brings more than just dunks to the team, and Rebibo knows it.

“He’s a tremendous passer, he really passes the ball well, he finds people in transition, he can obviously score the ball, but I do believe he could be the best defender in the state if he put his mind to it,” Rebibo said. “I think that that’s something we’ll continue to challenge him on and see progress throughout the years.”

When he’s not collecting points and assists for the Wolverines, he’s collecting shoes. Stanley estimates he has 30 to 35 pairs, but he does have a favorite.

“My Air Jordan 9s, I like those the best because I feel like I haven’t see those a lot around so I like to wear those on occasion.”

The Air Jordan 9s borrowed design cues from the baseball cleats Michael Jordan wore during his brief stint in minor league, according to flightclub.com. The ode to His Airness’ diamond days are fitting, as Stanley also plays baseball. He plans on pitching for the baseball team this spring.

But the scholarship offers he already received before playing a single high school game are for basketball. Both UCLA, where Westbrook played college ball, and the University of Southern California have already given Stanley offers, complexifying an already intense rivalry in the Stanley household. His father went to USC and his mother ran track at UCLA, but Stanley no longer has a preference.

“I’ve [leaned toward] USC a lot but now I’m pretty neutral because both of the coaches offered me a scholarship.”

Stanley fondly recalls the day the Trojans offered him a scholarship.

“I was in class at my old school and I went to the bathroom…and then I came back and I just felt something like, ‘you know, something’s going on,’ but I didn’t think much of it,” Stanley said. “When my mom picked me up she was like ‘oh, the USC coach called’ and I was like ‘okay’ and she was like ‘he offered you a scholarship’ and I just went crazy.”

But despite everything he has accomplished so far, Stanley still has his fair share of skeptics, who believe his age (16) is an unfair advantage for a freshman.

I was in class at my old school and I went to the bathroom…and then I came back and I just felt something like, ‘you know, something’s going on,’ but I didn’t think much of it. When my mom picked me up she was like ‘oh, the USC coach called’ and I was like ‘okay’ and she was like ‘he offered you a scholarship’ and I just went crazy.

During one of his dunks in the second quarter, he received a technical foul for hanging onto the rim, and Rebibo promptly benched him. Freshman mistake.

Five rows behind Stanley’s seat on the bench sat a man in a grey USC Trojans sweatshirt. It was Andy Enfield, the head coach of the Trojans’ men’s basketball team. For another freshman, or any player for that matter, it would have been a bit nerve-racking.

Enfield had seen Stanley's mistake. Stanley, however, looked as though he didn’t even notice Enfield. What else would you expect from the Smooth Operator? 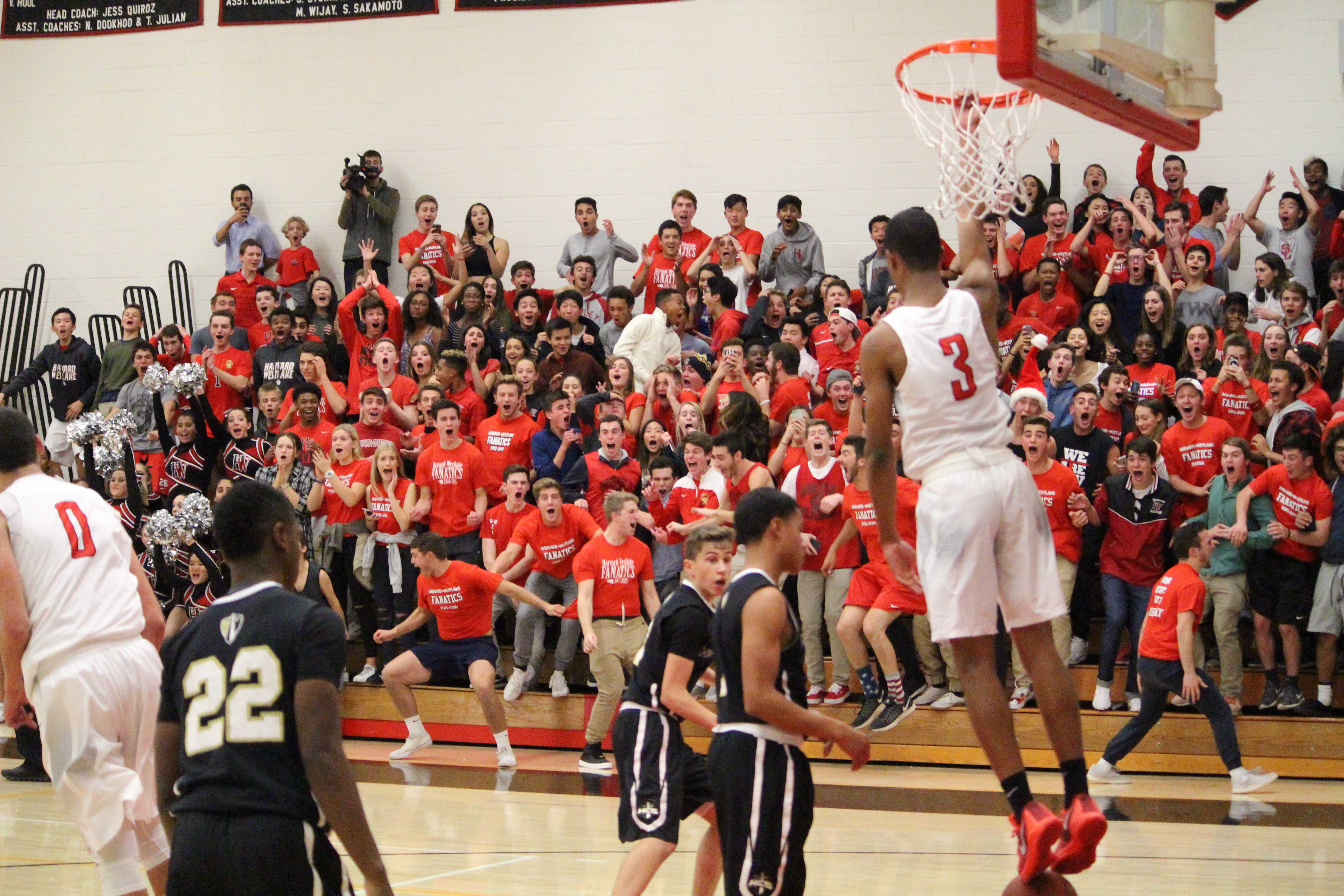