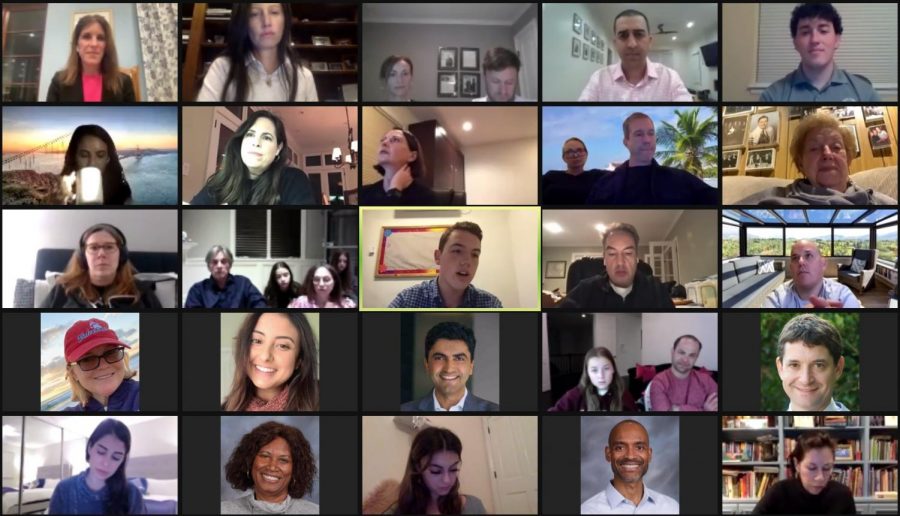 Students share their experiences during the Q&A portion of the panel.

Members of the Harvard-Westlake Jewish Family Alliance (HWJFA) joined a virtual panel of Pro-Israel college students and listened to their experiences pursuing Jewish activism on campus at 7 pm on March 3.

Moderated by the American Israel Public Affairs Committee’s (AIPAC) Senior Director, Jason Youdeem, the discussion hosted Rose Ritch, a senior at the University of Southern California, Jakob Rheins, a senior at University of Colorado Boulder and Ethan Fine, who is currently taking a gap year and joined the Zoom from Israel. All three panelists shared their prior experiences working for AIPAC and numerous Jewish organizations and emphasized the role of Jewish activism in their college experience.

Ritch, who has served as Co-President of Trojans for Israel among other activist organizations, said that while she has faced pushback regarding her progressive and Pro-Israel identity, becoming more educated and meeting people has allowed her to raise her voice.

“It’s not uncommon to encounter some hostility,” Rich said. “As a young college student, that can be scary. You want to be accepted and you’re trying to find new friends. I find myself checking my identity at the door… But as I learned more and talked about it [zionism] more, I found how many other people had the same identities as me, and I began to learn how to use my voice, and see that I’m not alone in these spaces. ”

College students spoke on their experience as Pro-Israel activists.

Agreeing with Ritch in the importance of finding spaces on campus to express his identity, Rheims said that much of his on-campus experience as an activist at the University of Colorado Boulder has involved finding allies and fostering connections to Israel through interests like music or space-travel.

“I feel very privileged that for the past four years I’ve been able to be proud and lead programs that allow me to express my Pro-Israel side,” Ritch said. “Luckily, on my campus, the attitude is about finding a way to connect people to Israel based on something that they are passionate about. In order to make sure that and the open discussions can continue, you need to make sure that people don’t see Israel in an antagonistic light.”

As junior leader of HWJFA and a Jewish activist himself, Gabe Glassman ’22 helped to organize and encourage participation in the event. He said that Jewish students at HW are very lucky to have opportunities to hear from such a strong community of inspiring activists.
“Being Jewish at Harvard-Westlake is an amazing thing, especially because we have so many Jewish peers that we can relate to. It’s important for us to speak out about religion and culture because we have such a large group of people who know what they’re talking about. Educating others on our history and culture is definitely very important for us.”