Discussing the spike in violence against Asian-Americans 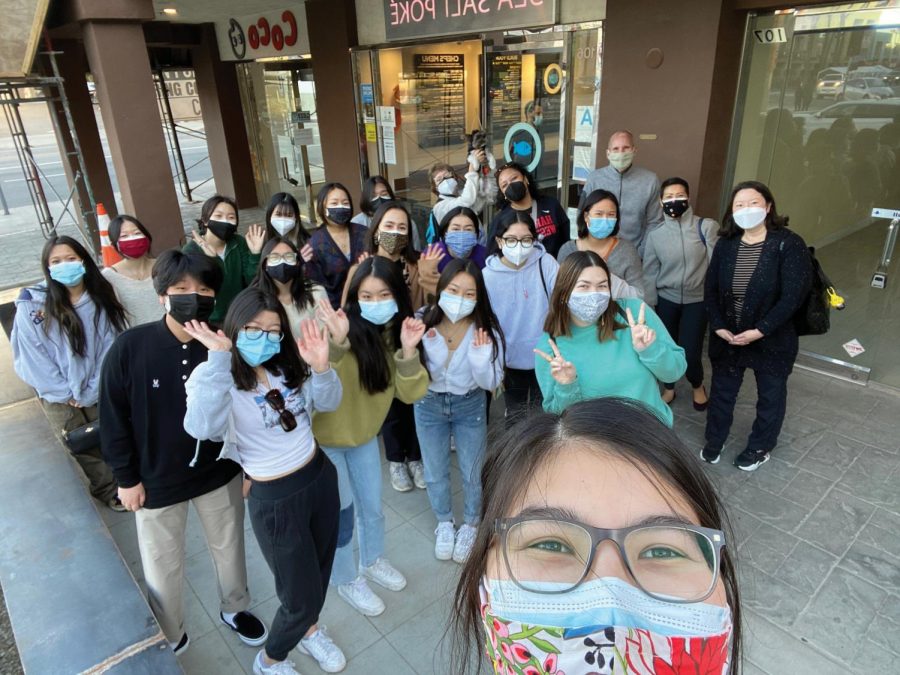 Printed with Permission of Chelsea Cho

Students wearing masks pose in front of a storefront on Sawtelle Boulevard.

Asian Students in Action (ASiA) club members gathered on Sawtelle Boulevard in Japantown to spread awareness to local community members about the recent increase in Asian-targeted hate crimes. Those who participated distributed pamphlets to nearby businesses containing information on how to report such attacks March 8.

According to NBC News, in the past year of the pandemic, anti-Asian hate crimes rose 150% across the country, mainly targeting the elderly. ASiA co-leader Chelsea Cho ’21 said the club decided to organize the event in order to help educate the Asian community in Los Angeles and remind ASiA members of the importance of sticking together through troubling times.

“I think so many ASiA members have felt isolated, alone and honestly helpless, as we’ve all been seeing and reading news about anti-Asian attacks,” Cho said. “It’s exhausting to see that people who look like your grandparents and parents are being killed or beaten every day.”

The event’s participants called nearby stores and restaurants on Sawtelle, handing out all 750 of their pamphlets. To accommodate many older Asian Americans who prefer to communicate in their native languages, the club printed instructions translated in Chinese, Vietnamese, Japanese and Korean, in addition to English.

Aside from supporting the local Asian community, Cho said she believes the event helped strengthen bonds and morale within the club.

“My biggest takeaway from going to Sawtelle on Monday was just a general sense of pride at how active and engaged ASiA members are in our community,” Cho said. “It was such a breath of fresh air to be together with a goal and to accomplish something—it made me really appreciate all the meetings we’ve had this past year, even if they were on Zoom.”

ASiA member Yoshimi Kimura ’23 reflected on the extensive planning process and therewarding payoff from participating in the event on Sawtelle.

“From organization to execution, everyone contributed to the event in different ways,” Kimura said. “Some people called the businesses ahead of time to ask if they were interested in the pamphlets, some people printed out those pamphlets and others spoke directly to the staff at the businesses when we dropped the pamphlets off. It’s also nerve-wracking but so illuminating to be able to advocate for a cause you believe in to total strangers in a safe environment with chaperones who are willing to step in if things get out of hand.”

“The major takeaway from the students I worked with specifically was that with courage and determination, they can convey personally how anti-Asian biases affect them, and people will respond empathetically,” Lee said. “Some storefronts initially refused to pass out the pamphlets at their stores, but after speaking to our thoughtful and convincing students, they too bought into the cause and decided to help raise awareness in the Sawtelle community.”

The group hosted a similar event in Koreatown to continue spreading awareness about the hate crimes March 13.