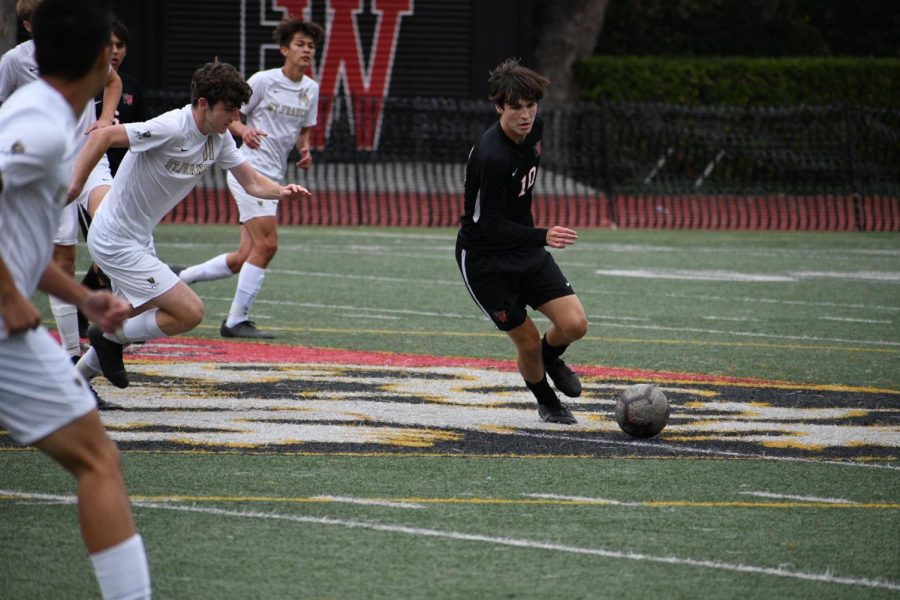 The boys soccer team lost to Loyola High School 0-2 at Ted Slavin Field on Monday, and then defeated St. Francis High School 2-1 the following Wednesday. These contests made the squad’s Mission League record 4-4 and gave the team an overall record of 5-6-1.

The match against Loyola High School stayed closed throughout the first half with defense prevailing, and no one being able to score on either side. However, early in the second half, Loyola went up 1-0 followed quickly by a second goal to make the score 2-0. The Loyola defense proved too much for the Wolverine’s offense as the team was not able to score throughout the entire contest.

This loss snapped the team’s three-game win streak. Leftback Ollin DeAntonio ’22 said he was upset with the team’s overall performance in a crucial game.

“I think we all wanted this one badly as traditionally Loyola is our fierce rival,” DeAntonio said. “Offensively we were not as explosive as we could have been, and we just made too many sloppy mistakes near the goal that ended up costing us.”

The game against St. Francis High School showed the team’s resilience. In the first half of the game, forward Connor Colao ’21 scored early to give the team a 1-0 lead. After halftime St. Francis High School came back to tie the game at 1-1, however, Colao scored another extremely long goal off a pass from midfield to give the Wolverines the lead and eventually the victory.

DeAntonio said he felt the team bounced back nicely from the loss however they were still lacking consistency.

“After Loyola, I think we were a little dejected, however, this win seemed to restore our confidence,” Deantonio said. “We need to be more consistent as throughout this season we have not been able to achieve sustained success. The season is coming to a close pretty soon so I hope our team can close out the year on a high note.”

The team looks to continue its success in its next league match against Crespi High School on Friday, April 23.