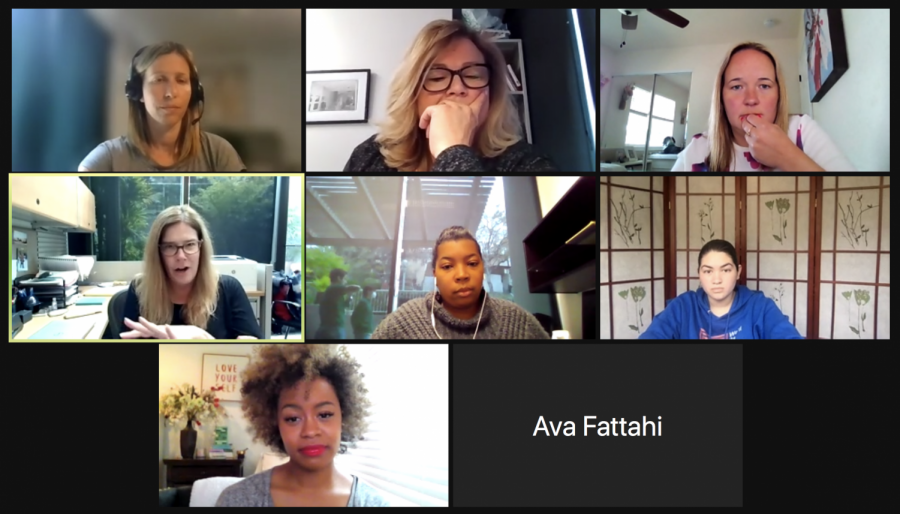 Head of Upper School Beth Slattery shares her reaction to the release of the Chauvin verdict as other participants listen.

In the midst of the Derek Chauvin trial decision, the school announced various measures prior to the announcement of the verdict in an attempt to benefit students who may be struggling during the time.

Head of Upper School Beth Slattery sent an email to Upper School students less than two hours before the release of the verdict announcing a virtual open discussion event led by deans and administrators in which students can speak and listen to their peers’ thoughts on the trial April 22.

Slattery said in an email interview that despite not knowing the consequences of the trial, the school is hoping to help students who want a safe space to discuss.

“Obviously we didn’t know what the verdict would be and what emotions the verdict would elicit, so we were just asking people to be kind and try to meet people where they are, knowing that could be a wide range,” Slattery said.

Deans announced that senior class meeting would be canceled Tuesday via email in order to allow students to have time  to process the verdict.

Slattery also offered words of encouragement to students and faculty in the wake of the verdict announcement.

“I think the most important thing, as has been true throughout the pandemic, is to demonstrate empathy for one another,” Slattery said. “Understanding that the way you experience an event, like the verdict, might not be the way someone else is experiencing it based on their life experience and that’s okay.”

The event itself had 11 participants consisting of students and administration on Zoom and took place during the 30 minute break period Thursday afternoon. It followed an open forum style of discussion where attendees could speak and respond to one another at any point.

Faculty and students spoke on their thoughts regarding the verdict

Benefits Administrator Yutopia Essex said that she experienced a variety of emotions when the verdict was released and questioned the amount of progress the result truly made.

“I felt a lot of excitement along with disbelief,” Essex said. “I thought to myself, ‘Is it truly a great day?’ Because [Floyd] had a knee on his neck and died because of the police brutality and racial injustices that have been going on for hundreds of years in this country. Thank goodness that [Chauvin] has been held accountable, but with this news, I realized that people are still getting murdered and that this decision is only a small thing in such a flawed system.”

Felicity Phelan ’21 was another participant who said they had a difficult time feeling joyful about the verdict and also took time to reflect on the future of systemic racism following the trial.
“When the verdict first came out, I listened at school,” Phelan said. “Later that evening, I was talking to a friend of mine who is Black and has been involved in Black Lives Matter and following the trial and he expressed that he was unable to be happy because he felt that no sufficient progress had been made. It’s hard to get super excited about this result because there is still a lot to be done and optimism wasn’t my first feeling once the news came out.”