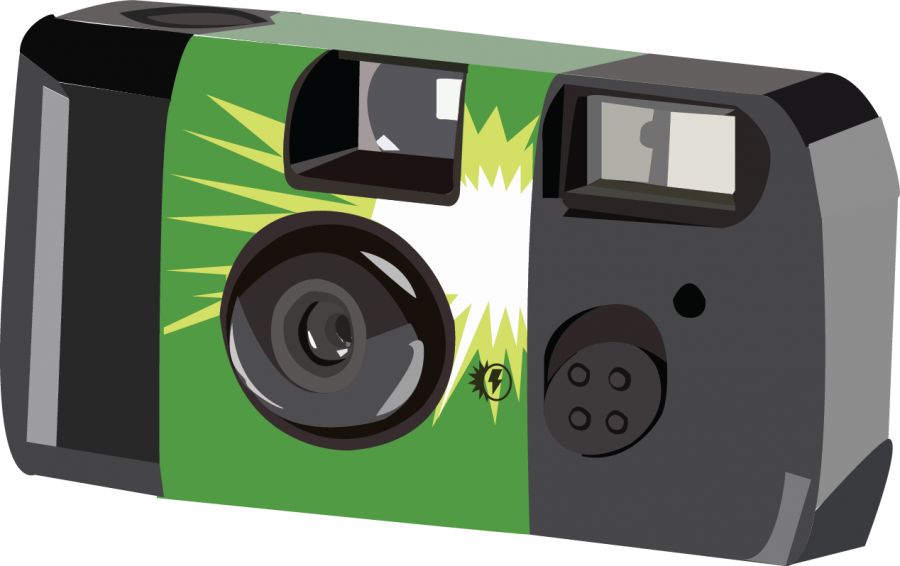 During the 2019 Geology trip to Death Valley, Lena Bagley ’22 captured her classmates balancing on a colossal boulder with her Minolta X-700 camera on a roll of Kodak Ektar 100 color negative film. Soon, she had pulled the film advance lever 35 more times, leaving her with a full roll of film.

“I was really excited about the photos I took, but as soon as I got home, I realized that I had accidentally exposed the roll of film to light, which ruined the entire batch of photos,” Bagley said. “I wasn’t upset about it after because it was more about the process than the final product. With film, you don’t know what you’re going to get until the end, and you’re forced to be more thoughtful with the photos you take. While I do wish that I got to see the photos I took on the trip, I ended up being able to really connect with my surroundings and take it all in.”

Following its decline in the 2000s, film photography has been on the rise in recent years, particularly with the popularization of disposable cameras. In a survey of 6,800 people conducted by Ilford Photo, 24.2% of respondents said they were new to film, and 32.8% said they returned to film after a break. Additionally, in an interview with NBC, Eastman Kodak General Manager Ed Hurley said Kodak was manufacturing two times as much film in 2019 than it was in 2015.

Nik Grube ’21 said he first noticed film photography gaining traction on social media as more of his peers began to post photos they shot on film.

“[I’ve seen a rise] primarily on Instagram,” Grube said. “I follow a couple of photography accounts on Instagram, and I would say there’s definitely been a greater proportion of the pictures they post that are film-based. And, in addition to that, [there has been an increase in posts of] casual social settings of teenagers or high school kids and college kids. They’ll post a lot more pictures taken on film on their Instagrams.”

Some students choose to shoot on disposable film cameras

Sales of disposable cameras have been record-breaking, according to Time Magazine. In 2016, Fujifilm sold 6.5 million disposable QuickSnap cameras, in comparison to 2014, when it sold 3.9 million cameras.

“I think they have a really cool quality to them,” Porter said. “It’s so different from what we’re surrounded by, which is digital media that you have right at your fingertips. It’s definitely a different feeling and has a different vibe to it. It’s less of ‘Take 800 million pictures, go through them and pick which ones we like.’ You have a limited number [of photos], so it takes the pressure off of [photography].”

Santiago Salazar ’21 said his fascination with film photography began at a young age when his father introduced him to his first camera; since then, he said he has enjoyed the process of developing negatives the most.

“[The process] is zen,” Salazar said. “You compose the shot and think about it for a moment, but you don’t [complete the process] until you get the photos back. So you’ll take the photos and leave them in the back of your head and just go along with your day. I like that part, but some people won’t like it because they don’t get to know how their photo turned out.”

Visual Arts Teacher Alexandra Pacheco Garcia said the physical process of developing film differs from the modern art of photography, which has become dematerialized through cell phones. She said teaching film photography allows her to share the slower, more self-reflective process of making images with her students.

“The first time you’re in the darkroom is such a magical experience because you get to have this other relationship with the images that you made, however long ago, and you get to re-experience [the photos] in a different way,” Garcia said. “You have no idea what’s going to be on the other side of that piece of film. It’s the first time you get to see your pictures show up in a chemical bath in this very tranquil space that is the darkroom. It’s magical.”

Salazar said the school’s photography program, where he was able to learn more about film, was beneficial to his growth as an artist.

“Being at [school] definitely helped because the photo program is really strong,” Salazar said. “It has not only digital cameras but [also] a lot of film equipment. We have so many different cameras [and] our own darkroom. You can even develop your own film and be a part of the whole process in a different way than if you picked it up on your own. [Having all these resources has] been really valuable to me doing film photography.”

Others still opt for digital photography

In contrast, Colin Yuan ’22 said he prefers using digital cameras for his photography projects. Yuan said his curiosity led him to try the medium of film photography, but he ultimately decided that digital photography better suits his artistic range.

“Film does cost a lot—all the materials are pretty expensive,” Yuan said. “Also, you can turn your digital pictures into film pictures and get that same sort of vibe. I personally just like how with digital, there’s no limitation, and you could do a lot more with it.”

Visual Arts Teacher Jesse Chehak said students have gravitated toward analog photography in an age dominated by digital photography because they crave a unique, immersive experience to break up their busy days.
“To me, [the rise of film photography is] communicating that generations like [Generation Z] are hungry to engage in activities [where] you want to use your hands, and you want to make things,” Chehak said. “You want to be in a studio, and you want to have full control over what you’re doing. Folks are realizing that when you shoot film photography, you are committing to this multi-step process that is funky and smelly. But when it’s done step by step, you get this sense of ownership. [You end up with this] unique, jewel-like object that completely transcends the ways that most of [the younger generations] are used to consuming photography.”