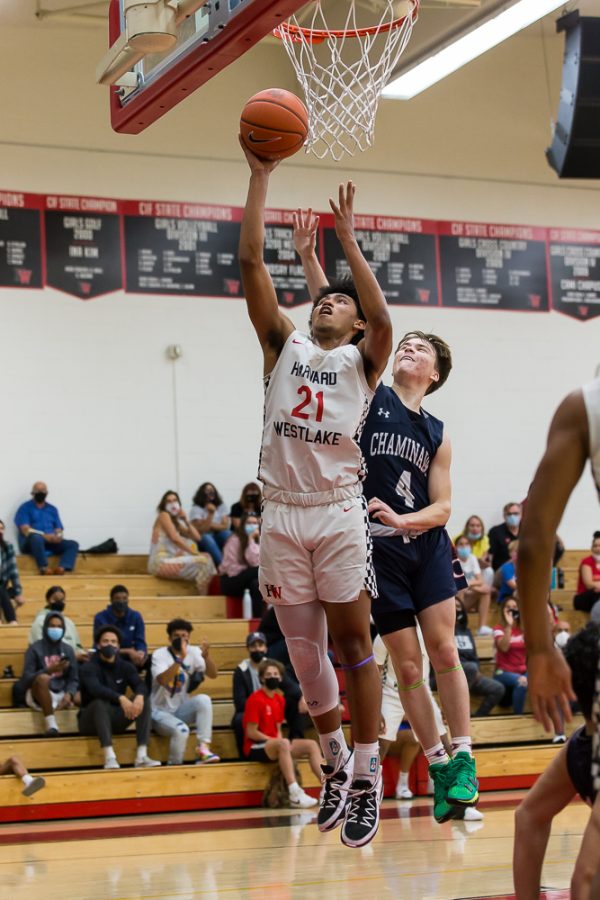 Adam Hinton goes up for a layup in a game against Chaminade College Preparatory High School on May 12.

The boys basketball squad won the Mission League Championship for the third year in a row in a 79-43 victory over St. Francis High School on May 21. This win, which was on senior night, had hundreds of fans in the stands, giving the Wolverines momentum heading into playoffs.

In the month of April, the boys basketball squad went on a nine-game winning streak and were undefeated in Mission League play until the team was defeated by Chaminade Preparatory High School 66-54 at home on May 12.

Currently, the squad has gone 16-3 this year with a league record of 9-1, and the Wolverines are currently competing in the CIF-SS Open Divison Playoffs as the No. 7 seed. The Wolverines recently beat Corona Centennial High School, the No. 3 seed,  70-65 on the road in their first playoff game.

Looking ahead to the playoffs, point-guard Cuban Molzen ’20 said the squad is working hard to prepare sets on both ends of the court.

“We’re preparing our offensive and defensive plays for our respective opponents while staying in good shape,” Molzen said.

Although shooting guard Adam Hinton ’21 and forward Trumann Gettings ’21 still remain the team’s top scorers, younger players such as point guard Cam Thrower ’22 and small forward Brady Dunlap ’23 have stepped up this season by putting up valuable points for the Wolverines.

Dunlap said he is proud of his recent performances and how he has been able to contribute to the team this year.

“It feels good to be playing again in the first place—I missed being on the court a lot,” Dunlap said. “As for how I’m doing this year, it’s great being able to play a role in our team winning games. My individual good and bad performances always motivate me to work and get better for the betterment of the team.”

As the squad enters the CIF playoffs, Thrower said the team needs to continue its defensive focus to have a successful run.

“I think the most important thing we need to do is defend and make sure that the possessions we get are good quality and produce good results for our team,” Thrower said.