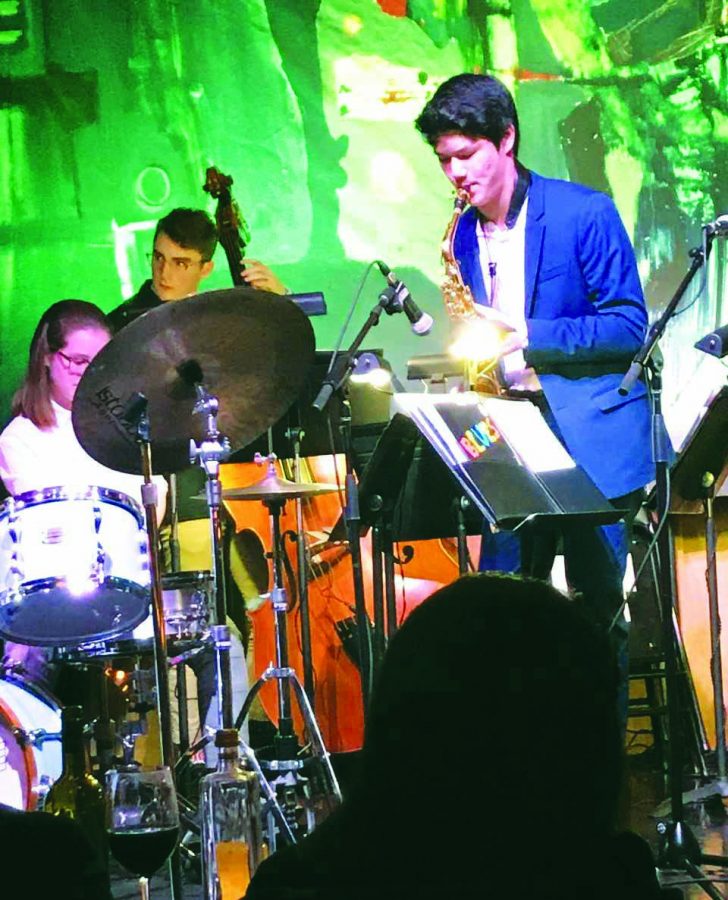 The spotlights focus in on Brandon Liang '21 as he performs onstage with the school's Jazz Band.

When saxophonist Brandon Liang ’21 stepped on stage to perform at the 2018 Worldstrides Heritage Festival in Seattle with his fellow Jazz Band musicians, adrenaline rushed through his veins. As the lights came up in the performance hall, he knew that being a jazz musician was what he was meant to do.

Liang said his music career has expanded immensely since seventh grade, when he began performing in Symphonic Band. He also said he makes his own lo-fi jazz and hip-hop beats and has traversed a wide variety of music genres along the way.

“[Making beats] lets me utilize all the skills I’ve learned as a jazz musician but in a completely different style, and I love the vibe,” Liang said. “Over time, I learned to really love [jazz] and music as a whole.”

Liang said his eighth and ninth grade band trips to Disneyland and Seattle were the two most formative events of his music career.

“The experience of being able to perform on stage with friends was so fun,” Liang said. “We also were given free time to explore Seattle after our performances, and those are memories that I’m never going to forget.”

“[Wayne and Costantino] have taught me so much about jazz and about how to approach music in general, but I’d say I’ve learned the most from my bandmates,” Liang said. “The greatest aspect of being in the jazz band is being able to play music with other students who are equally as passionate about making music.”

Looking back on his career in Jazz Band, Liang said he has come a long way since seventh grade in his journey of musical appreciation.
“I initially entered Jazz Band in eighth grade not liking jazz,” Liang said. “I just did it because I played the saxophone, and Jazz Band was the highest band a [saxophone] player could get into. Now I can’t see myself without music in my life.”