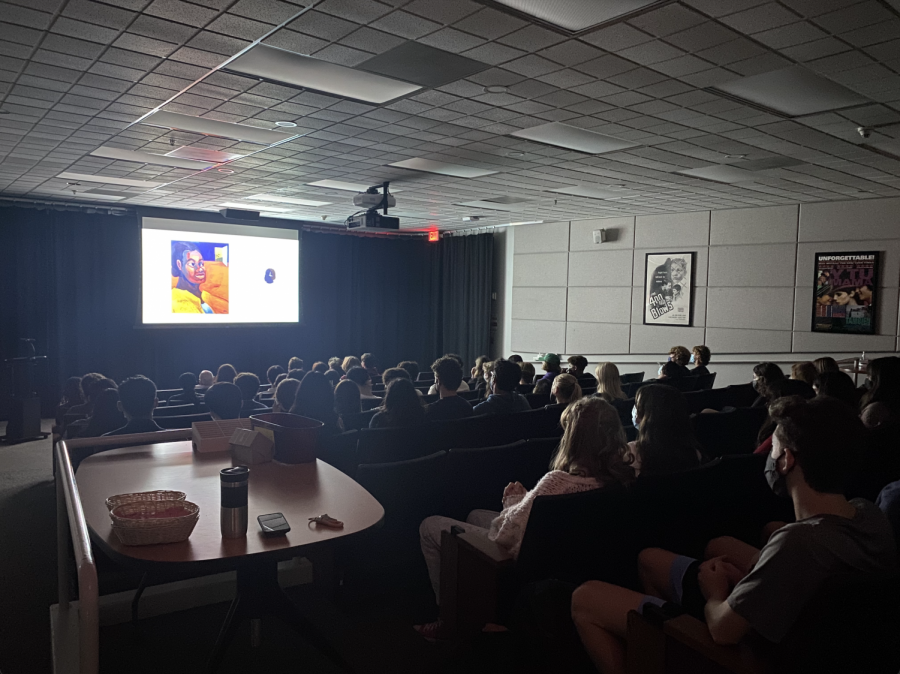 Students view films made by their classmates in Ahmanson Theater, which was one of the activities available during Community Time.

Upper school students gathered on Monday, Sept. 14 for an interactive event where they had the opportunity to experience the creative talents of the school community.

In Rugby Theater, members of the student body displayed their musical talents through singing and playing a variety of instruments.

Students speak on their experiences sharing their work

Aiden Daneshrad ’23, who performed multiple songs with his band, said that he enjoyed having an audience to perform for.

“Playing in front of our friends and teachers was really fun as we all were able to express ourselves in ways that we can’t do in the traditional classroom,” Daneshrad said. “It was fun, a few slip-ups but overall it was really fun.”

Students presented their short films in Ahmanson Theater. Students who participated in the event include Assistant Features Editor Fallon Dern ’23, Rohan Mehta ’23, Will Chandrasekhar ’23 and more. Chandrasekhar’s film “Survival Style,” which centers around the California race riots that occurred in the 1960s, premiered at this event, Chandrasekhar said he enjoyed being able to share such an impactful film with his school community.

“It was the first time I showed it [Survival Style] in front of an audience so I was pretty excited,” Chandrasekhar said. “I think it is good to share this [with a] wide audience because it is meaningful in terms of current events and the history of Los Angeles.”

Idalis McZeal ’23, an attendee of the screenings of the short films, said she enjoyed getting to see the work of her classmates.

“I feel like I got closer to my community, I got to view the work we are producing and the talent our school showcased,” McZeal said. “I really liked the ‘Supermodel Minority’ film because a lot of my friends are in it and it has a really intriguing and insightful take on the experiences that Asian-Americans face.”

Limerick coordinated the video art screenings. She said there was a gratifying and interpersonal feeling that was widely experienced at the event.
“It was so special to feel the audience’s reaction to each student film in Ahmanson today,” Limerick said. “The screening was well-attended, so video artists finally got real-time feedback from their peers in forms of communal laughter and shared silent reverence. I thought the event was successful in offering enticing optional experiences for students and adults to bond over dance, visual art, music, video art and food.”