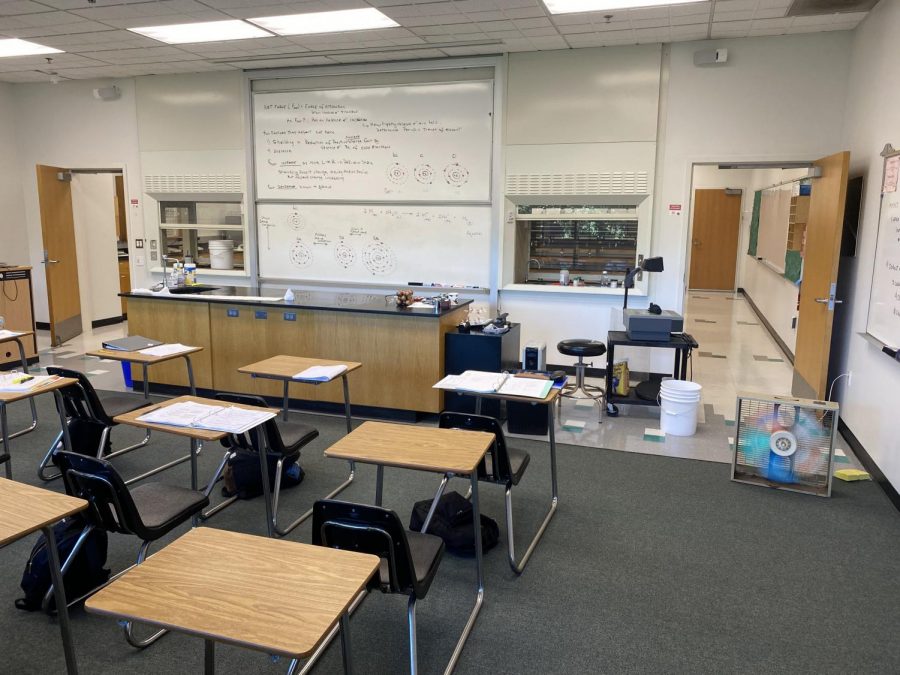 A fan blows out the fumes inside the science classroom in the aftermath of the incident.

Davis Marks and Will Sherwood

At approximately 9 a.m., fire alarms rang throughout the school signaling all students and faculty to evacuate to the Ted Slavin Field.

Whitney Enenstein ’24, who was in the class where the accident occurred, said that an extreme reaction triggered the fire systems.

“We were doing a lab about how different metals react in water and during the demonstration, too much sodium was put in, so the reaction was very aggressive,” Enenstein said. “It made a loud popping noise that made all of us jump and a big plume of smoke rose to the ceiling, so our teacher told us to go outside and wait for the smoke to disperse. The next thing we knew, the fire alarm was going off and the entire school was pouring out onto the field.”

While the students and faculty gathered on the field, Plant Manager Dave Mintz ’87 and the maintenance team worked in the affected classroom to assess the situation and funnel the smoke out.

History teacher Lilas Lane was in the midst of a lecture about scientific history when the alarm went off and immediately had students leave the room and evacuate to the field.

“We were about to start discussing Bacon and Descartes and their contributions to the scientific method when the alarm went off–about 15 minutes before the end of class,” Lane said. “Nobody had heard anything about a drill, so we figured it was either a false alarm or perhaps a real incident. I told the students to head down to the field and await further instructions about whether to come back to class or not. It was all very relaxed and orderly, but I was bummed that we likely wouldn’t get to finish our lesson. Then I heard the alarm was the result of a chemistry experiment gone awry, so the whole experience had a certain scientifically themed irony.”

Students and faculty spent approximately five minutes gathered on the field as the maintenance team confirmed there was no fire nor safety issue. Students were then released to break.

Shoshie Bernstein ’22 said she wasn’t distressed by the alarm due to overexposure to fire alarms at past schools, but still quickly got to the field to be safe.
“I didn’t think much of the fire alarm and was surprised that it went off but not worried,” Bernstein said. “I went to a big public middle school where the fire alarm would go off because some kid pulled it for fun or because a teacher burnt toast in the teacher lounge microwave so I’m a bit desensitized to the sound of a fire alarm. I still walked quickly out of the building with the rest of my classmates. Better safe than sorry.”