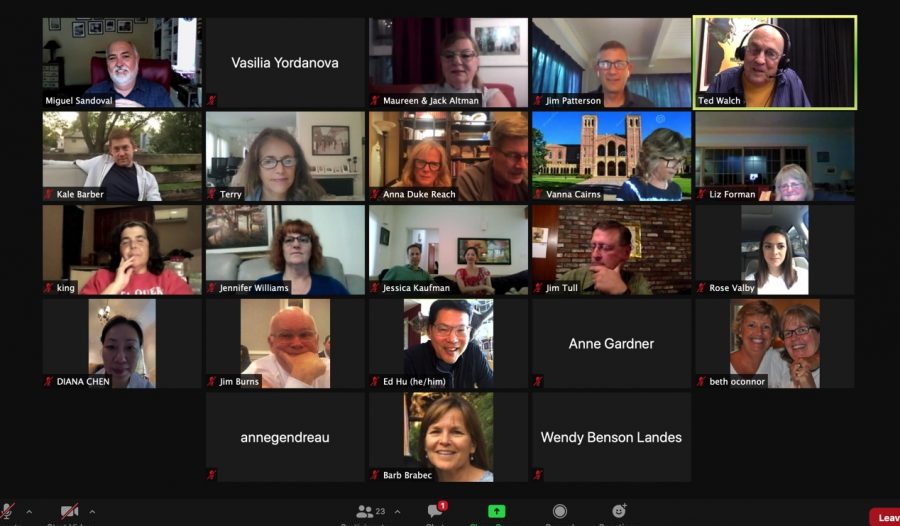 Members of the school community gather to hear actor Miguel Sandoval share his experiences working on the film "Clear and Present Danger." This event is part of the Cinema Sundays program ran by Visual Arts, ISIR and Performing Arts Teacher Ted Walch.

The first Cinema Sunday of the 2021-2022 school year occurred virtually on Sept. 26. The event featured the 1994 film, “Clear and Present Danger,” with actor Miguel Sandoval (Olivia Sandoval ’06) attending as the evening’s guest speaker.

Cinema Sundays are a series of events hosted throughout the school year by Visual Arts, Interdisciplinary Studies and Independent Research and Performing Arts Teacher Ted Walch. Attendees of Cinema Sundays watch a given film prior to attending the event. Walch then facilitates a discussion of the highlighted film and features someone who worked on the movie.

In “Clear and Present Danger,” Sandoval plays a Colombian drug lord named Ernesto Escobedo. The film is a political thriller based on the best-selling novel by Tom Clancy. It tells the story of a CIA Deputy Director who unknowingly becomes involved in an illegal war against a Colombian drug cartel.

During this first Cinema Sunday, Sandoval said acting in the film changed the course of his career.

“[The movie] made me go from having an occasional occupation to having a career [in acting],” said Sandoval.

Director of Submission for Westflix Oliver Wyman ’22 said the purpose of Cinema Sundays is to appreciate and discuss timeless films with people involved in them.

“Cinema Sundays are the ideal way to grow your proficiency in understanding motion pictures as well as to build a deeper film literacy,” Wyman said. “Although Cinema Sundays are starting through Zoom, we are hopeful we can return to that in-person experience and viewing that is so necessary for understanding a movie in its rightful way.”

Walch said there will be 19 Cinema Sundays this school year, all free for anyone inside or outside of the school community to join. The next Cinema Sunday will discuss “Hidden Figures” with Alum Jason Collins ’97. Walch said Cinema Sundays have become a favorite tradition for him over the years.

“I’ve been doing Cinema Sundays for years, so the organization [of the event] is as simple as thinking of a good movie with a good guest. This is usually [a potential speaker whom ] I know personally,” Walch said. “I want [Cinema Sundays] to be friendly and informative, never confrontational.”

Middle School Mathematics and Computer Programming Teacher Jessica Kaufman attended the most recent Cinema Sunday. She said she was unable to stay for the full duration of the event, but she has been taking part in most Cinema Sundays for the past three years.

“I liked ‘Clear and Present Danger,'” Kaufman said. “I found it interesting to see flip phones and computers from 1994, which is around the time I began teaching at HW.”

During the discussion, Sandoval said he worked with the same stunt double for multiple movies, recalling his experience with action movies throughout his career.
“I wanted to do my own stunts [in the beginning],” Sandoval said. “I gave that up many years ago. For one, you’re taking work away from somebody [by doing your own stunts] but also you get to an age where you don’t have to prove yourself anymore.”