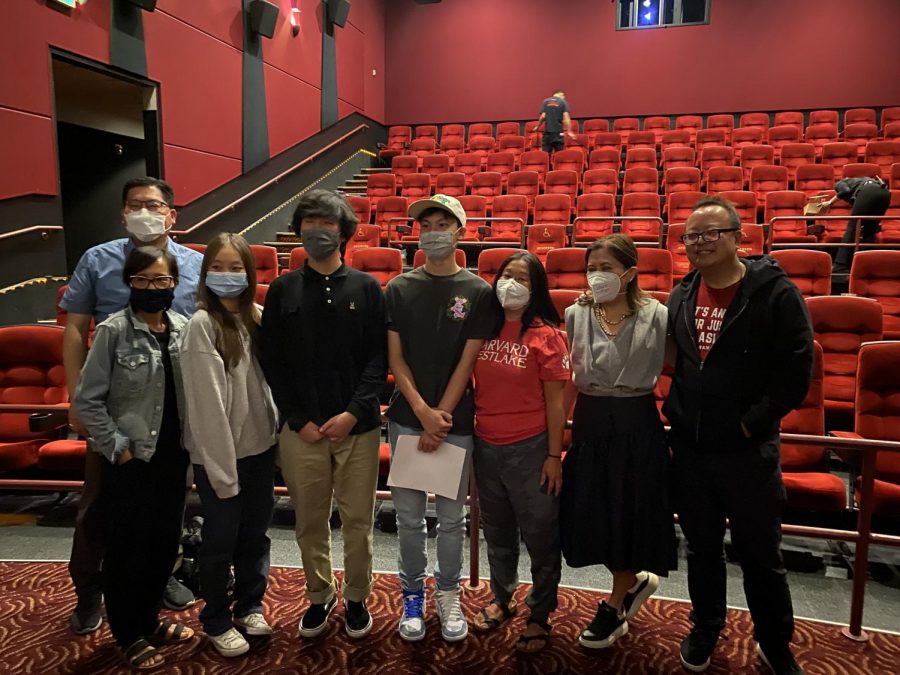 Printed with permission of Karen Fukushima

Members of the Asian American Culture Club pose for a picture after watching Shang-Chi and discussing the importance of Asian-Americans in entertainment.

Members and guests of the Asian American Culture Club (AACC) gathered to watch a screening of “Shang-Chi and the Legend of Ten Rings” and discuss the roles of Asian-Americans in the film industry Saturday, Oct. 16. The event featured a discussion led by Time Contributing Editor Janice Min (P Tate Sheehy ’24 and Will Sheehy ’22) and Shang-Chi Media Consultant Jeff Yang.

AACC Leader Chazzy Cho ’25 said the film allowed for students to have a deeper conversation about the roles of Asian-Americans in Hollywood.

“With Shang-Chi being such a success in the film industry, it was the perfect opportunity to talk about Asian American issues as well as share the experience of being able to see an Asian actor starring on screen,” Cho said.

Featuring a predominantly Asian cast, the movie was seen as a risk by many, including Disney CEO Bob Chapek, who called the release an experiment during a Disney Q3 earnings call. However, AACC Leader Lauren Park ’25 said that she enjoyed seeing the movie break the mold of what Asian Americans are cast to do in Hollywood.

“What I enjoyed most about the movie was seeing Asian characters portrayed as something other than the usual stereotypes,” Park said. “The characters weren’t depicted as nerdy or having heavy accents. Seeing Asian men play [both] the hero and villain of the movie was inspiring to see and even gave me a sense of pride.”

The first Disney movie to open exclusively at theaters since the start of the pandemic, “Shang-Chi and the Legend of the Ten Rings” brought in an estimated $71.4 million on Labor Day weekend alone. Middle School Dean Karen Fukushima said that she was not surprised by the film’s success.

“I think it’s about time that there is an Asian American superhero in the Marvel Cinematic Universe,” Fukushima said. “There is a long history of successful martial arts films in Asia, and Shang-Chi adds so much more to the genre and brings more Asian American representation to Hollywood.”

After the movie, Min and Yang discussed the hardships that minority films face in Hollywood. Yang said there is increased pressure on minority films to succeed in order for studios to continue putting money into them.

“It’s not that there won’t be any more Asian-American films if one film doesn’t work, but you won’t be able to actually have the budget, the liberty to cast who you want to cast,” Yang said. “You won’t be able to do things that take you to different story areas.”

Park said she views this as an unacceptable double standard in Hollywood.
“If this standard applied to everyone, does that mean if a movie with white actors performed poorly, they would stop making movies with white actors? Probably not,” Park said. “I think Shang-Chi and the Legend of the 10 Rings took Hollywood one big step away from this harsh reality, and closer to an inclusive reality of accurate representation from all cultures and backgrounds.”