Alyssa Thompson plays with USWNT in CONCACAF U-20 Tournament 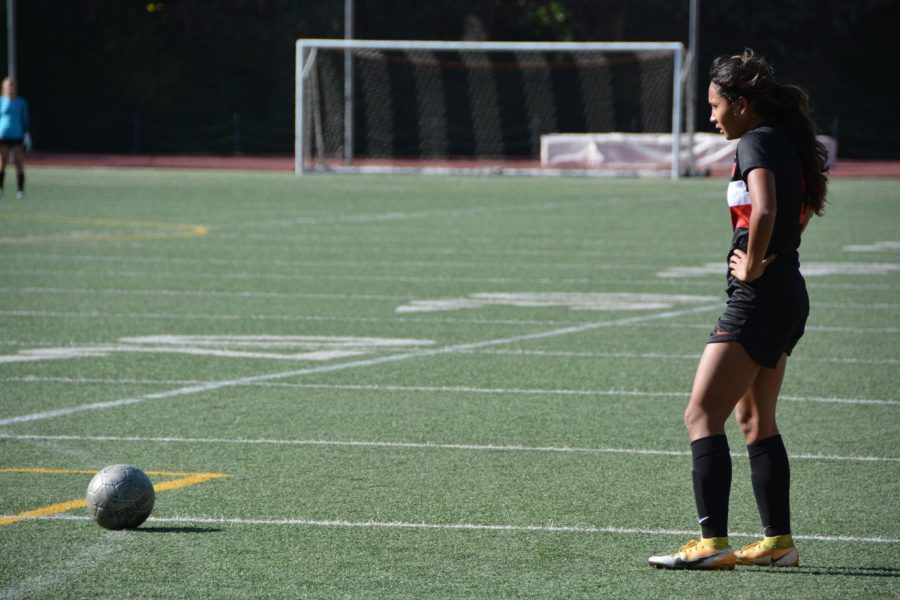 Forward Alyssa Thompson '23 prepares to take a free kick in a Division I California Interscholastic Federation (CIF) State playoff game in the 2020-2021 season.

Girls soccer team forward Alyssa Thompson ’23 was one of 20 players named to represent the Under-20 (U-20) United States Women’s National Team (USWNT) in the Confederation of North, Central America and Caribbean Association Football (CONCACAF) Women’s championship tournament. Thompson did not play with the school’s team this season as the USWNT schedule conflicted with the school’s winter season.

Thompson, who has played soccer since her childhood, said being named as a starter for the USWNT represented the culmination of all of her preparation.

“It means so much to me that I made the team,” Thompson said. “All my hard work and dedication has gone into this moment.”

Girls Soccer Program Head Richard Simms said Thompson’s success at the national level came at no surprise to him because of the hard work she has demonstrated while playing for the school.

“She has always had an elite mentality combined with elite ability,” Simms said. “[Thompson] has worked so hard for her success that I’m just very happy for her. She is the one that puts the work in and her daily effort is what makes her so special.”

As she continues to progress with the national team, Thompson said she wants to go as far as possible in the program.
“I want to become one of the best in the world at this game,” Thompson said. “I want to make the full Womens National Team and be a key player for them.”
The U-20 team is currently undefeated in the tournament, beating Nicaragua 6-0, Puerto Rico 7-0 and the Dominican Republic 7-0, with its next match against Suriname March 4. The team is the CONCACAF tournament’s reigning champion after winning in 2020 with a 44-1 goal differential.

For the 2020-2021 season, Thompson won the National Gatorade Girls Soccer Player of the Year award after leading the team to the Division I California Interscholastic Federation State Championship with 48 goals and 14 assists. This season, the team went 13-2-4, losing to Los Alamitos High School 2-0 in Division I CIF Southern Section playoffs.