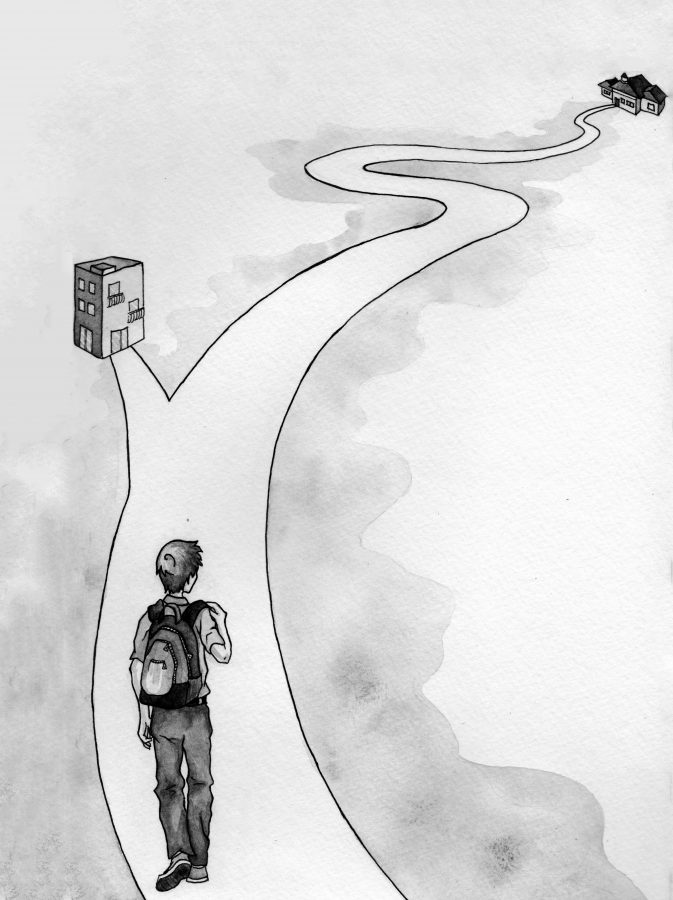 When Haden Modisett ’16 leaves school for the day, he has a choice between driving for an hour and 15 minutes to his family’s house in Manhattan Beach or walking 10 minutes to his apartment on Coldwater Canyon.

He always chooses the 10-minute walk, the same amount of time it takes for students parking in the Upper St. Michael’s lot to get from their cars to class.

Modisett and his family first decided to get an apartment last year when he transferred to the school because he did not have his license yet and would have had to wake up early to catch the bus. To solve the problem, his family decided to rent an apartment closer to campus. Modisett lives there during the school week.

Although his parents lived there at first to help him settle in and get accustomed to the building, they now visit less frequently.

“It’s nice to be independent sometimes because it pushes me to work harder,” Modisett said. “Sometimes it does the opposite. It was pretty nice for the track meets when the bus dropped me off late at [the school] and for the SAT. I could never get any sleep for the SAT, so at least this way I get more.”

Modisett said that there are some drawbacks to mostly living alone in the apartment.

“A lot of times I forget to even remember to buy food or even order it, usually during track season or especially on a track season day with Peer Support,” he said. “Sometimes it can get lonely, but usually I get enough homework that it doesn’t factor in that much.”

Some students who live far from school find that the most reasonable solution for them is to switch schools and shorten their commute. Isabella Tappin, a junior at Viewpoint, left Harvard-Westlake after last year, citing her hour and 45 minute commute from Malibu as a “huge factor” in her decision.

“The resulting lack of sleep and struggle to have enough time in the day for work really took a huge toll on me,” Tappin said. “I realized the costs of going to a school so far away with such a huge workload outweighed the benefits, and I’m glad I realized that.”

Tappin first quit tennis to get more sleep and have more time for schoolwork. Later, her family considered renting a house near campus but ultimately decided against it, she said.

“As an alternate solution, my parents hired a driver to pick me up in the mornings and afternoons to shorten the commute and give me more time for homework,” Tappin said. “I did get more sleep, but it was really expensive, and, honestly, I felt strange being chauffeured to school in a big black SUV.”

Head of Upper School Audrius Barzdukas said that the school would prefer students to live at home with a parent or guardian because it is not a boarding school.

Upper school dean Sharon Cuseo also added that when a student lives more than an hour from campus, the school asks if the family plans to move closer and offers to help them find a school closer to their home.

“In my experience, neither solution is great, the long commute, nor living without a parent closer to the school,” Cuseo said. “Occasionally living far away has worked, but typically only when homework can be done effectively during the commute. Otherwise it’s just asking too much of a student when two plus hours of each day is taken up by a commute.”

She said that it is ideal for students to live at home with a parent or guardian.

“Students who do not go home to that are missing some component of their high school experience,” Cuseo said.

Kevin Wesel ’17 and his family chose to move to Brentwood from Manhattan Beach two years ago, partly to be closer to school.

“The commute to school from Manhattan Beach wasn’t too bad in the mornings, but the traffic in the evenings, especially if I had an after-school activity, was really bad and I’d often be on the road for more than an hour,” Wesel said. “I wasn’t able to productively work during that time, and it would also give me a headache, so I wouldn’t be as productive when I got home.”

However, some students do not think moving is the best option for them.

Shannyn Schack ’16 said that she and her family decided not to move from their Malibu home to be closer to campus.

“I’ve thought about it, but I would miss Malibu too much,” Schack said. “I think my only problem with the commute is that I have to spend so much time on the road when I could be doing homework or something. I use the time on the bus to do any reading or watch a show or something.”

Both Wesel and Modisett ultimately decided when they came to Harvard-Westlake that the education would be worth finding ways to deal with the commute, they said.

“Harvard-Westlake had a good reputation, more people, great academics, a much, much better admittance rate for colleges and better sports [than my previous school],” Modisett said.