Barking Up the Money Tree 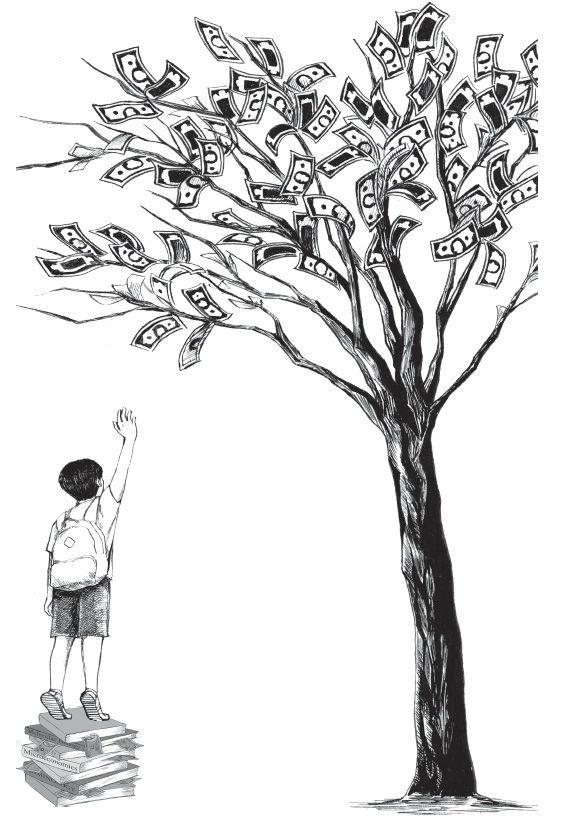 With a $36.4 billion endowment, Harvard University is so rich that it doesn’t need to consider applicants’ financial situations when admitting them. The university promises to meet 100 percent of any student’s demonstrated need and make it possible for them to graduate debt-free. A few years ago, Harvard also committed to paying 100 percent of the tuition for any qualified candidates whose families earned less than $65,000 per year.

According to a 2014 U.S. News and World Report story, only 62 out of the 1,137 colleges in America that send financial aid information to the magazine were able to meet 100 percent of students’ demonstrated need for financial assistance. They include all the Ivy League schools as well as the majority of the schools ranked in the top 20 of U.S. News and World Report’s college rankings. Students who need large amounts of financial aid often find their choice of schools limited if they want to be sure they’ll receive enough help.

“I’m unhappy that there were a bunch of schools that I wanted to apply to, but when I showed them to my dean, a lot of them had to go off the list because their financial aid wouldn’t be what I needed,” Jazmin Piche ’15 said. She added that she will need all of her college tuition to be covered by the school she attends. “Some of these are really good schools, but I can’t apply to them because of the financial aid.”

The problem with applying to schools that don’t promise to meet 100 percent of demonstrated need is that when they admit candidates, they often send financial aid packages well below what the students need to accept their offers. However often this may occur, it is not the intention of colleges, said Shawn Abbott, Vice President of Financial Aid and Dean of Admissions at New York University.

“While yes, at NYU, it is the unfortunate reality that our financial aid budget does not allow us to meet every student’s full need by covering the full cost of attendance,” Abbott said, “that doesn’t mean anyone here at NYU creates a formula to intentionally provide a ‘gap’ between one’s aid and the cost of being at NYU.”

Union College in Schenectady, New York, on the other hand, employs a need-aware admission process, but meets 100 percent of demonstrated need. The school has a financial aid budget of roughly $40 million dollars and admits a yearly class of about 565 students on average.

“I have a fixed budget, and I need to manage that budget,” said Matt Malatesta, vice president of admissions, financial aid and enrollment at Union College. “We’re a school that’s committed to meeting 100 percent of need for all students we admit, so because of that commitment, in the margins of acceptance, financial aid will be a factor.”

Being need-blind without the resources to meet 100 percent of aid can hurt a college’s yield (the proportion of accepted students who attend the college), but can help with marketing the school, Upper School Dean Kyle Graham said.

“If you are a dean of admissions or a president of a college, you want to be need-blind so you can stand up at info sessions and say, ‘We’re not going to deny you just because you need financial aid,’” Graham said.

To apply for financial aid, students need to fill out the Free Application For Student Aid and the College Scholarship Service profile. The FAFSA tells colleges what the federal government estimates a certain family can afford, and this value is subtracted from the school’s cost of attendance to give the family’s demonstrated need. The CSS profile is an additional document processed by the College Board that gives more information for schools to take into account when considering applicants.

“It’s kind of scary, and the slightest mistake can really mess you up,” Piche said. “I heard there was a woman who was applying for financial aid, and she added an extra zero, and so when they got the various packages from colleges it was nowhere near enough. So we were very, very cautious.”

Since October 2011, postsecondary institutions participating in Title IV federal student aid programs have been required to post net price calculators on their websites, to help families estimate how much of each school’s tuition they could expect to contribute.

These calculators don’t always give accurate estimates, though. Often, they discount factors that play a role in the admission process, like geographical location and SAT scores, which colleges consider because they want to bring in a diverse group of students.

SAT scores also play a large role in a college’s ability to meet need because higher scores often correlate with students with better economic means. A school that requires higher SAT scores for admission will have a wealthier student body, Malatesta said.

“For a college that is competitive enough to require high SAT scores, that’s going to correlate to a student body that needs less financial aid,” Malatesta said. “If you have a student body that’s getting a 1500 or 1600 average on their SATs, as you go down that average you’re going to have a less wealthy student body. That doesn’t mean everybody, of course. There are plenty of students of lesser economic means who are going to outperform students of higher economic means, but as a general correlation, test scores skew very closely with income.”

Sarah* is also requesting full tuition coverage from colleges, mainly because her siblings will also be applying to college soon.

“I probably don’t need a full ride but, it would be helpful to have one because my little sister is going to be in college in two years, and my little brother is either going to be going [to Harvard-Westlake] or another private school, and education is very expensive,” Sarah said. “If I didn’t have siblings, it probably would be easier to pay for college, but since we’re all going through everything at the same time, it makes everything much more expensive.”

Many students who need aid don’t apply anywhere early decision so they’ll be able to compare financial aid packages from several schools. Sometimes, though, it’s worth it for these students to apply early anyway, Graham said.

“The conventional wisdom is absolutely not [to apply early],” said Graham. “But my thing is if [a student] is targeting one of those 60 schools, and they know that ‘If I can just crack this college, they’re going to give me a terrific financial aid package,’ then the best shot for that school might be early decision.”

Some families that need help paying for college have annual incomes too high to qualify them for need-based financial aid. In this case, students may seek out work/study options or merit-based aid. The problem is that many schools that students at Harvard-Westlake are interested in don’t give merit aid.

“We can steer people towards schools that traditionally give high levels of merit aid because a lot of our families don’t have a need, but they belong in that middle group that says, ‘We can pay for it, but it is not easy to pay for it,’” upper school dean Beth Slattery said. “That’s challenging because a lot of the schools our kids want to go to don’t give a lot, if anything, in the way of merit aid. So you can steer them to schools that might give merit aid, but they might not be happy about those schools.”

Morganne Ramsey ’14 is a current freshman at the University of Chicago and received both financial aid in the form of grants and a $20,000 merit scholarship. Ramsey is also currently applying for campus jobs so she can have some spending money.

“I think a lot of people are on aid,” Ramsey said. “But also, I think everyone here kind of hates asking their parents for money, so everyone complains about how much everything costs.”

That generosity at the high school level can be a problem when families are applying to college, Slattery said.

“The biggest issue that families here have is that we tend to be more generous with financial aid than colleges will be,” Slattery said. “So a number of families who got something from us expect something from colleges because they’re even more expensive than we are, but their standards are different, and they ask for more information.”

Harvard-Westlake doesn’t keep statistics on how many students apply for financial aid in college because many families prefer to keep that information private.

“If they want me to help them with financial aid, then I’m going to know their income, and people are very sensitive about spreading things around,” Slattery said. “And families here for who at one point, and this especially happened during the recession, money was never an issue, and then circumstances changed significantly – that can be incredibly burdensome for them.”