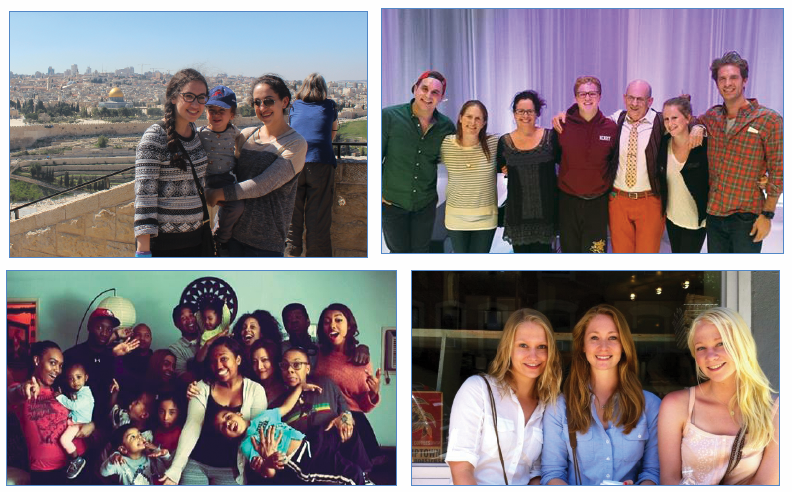 (bottom left) Tiana Coles ’16 is the youngest of five siblings, some of whom already have children. (bottom, right) Jenna Thompson ’16 is younger than her two sisters, both of whom live in other cities. (top right) Siblings of Henry Platt ’17 returned to Harvard-Westlake to watch Platt’s performance in the upper school musical “Company” last fall. (top, left) Jona Yadidi ’16 and Noa Yadidi ’14, right, sightsee in Jerusalem with their baby brother Seth Yadidi. Printed with permission of Jenna Thompson, Jona Yadidi, Henry Platt and Tiana Coles

As the youngest of three children, Jenna Thompson ’16 first noticed the age gap between herself and her sisters when she was six years old. She and her middle sister stopped playing together because her sister had started middle school. Her oldest sister, who is 10 years older than Thompson, “was never really a sister to me; she was more like a mom,” she said.

Thompson said she feels like an only child because her two sisters are rarely at home. Thompson is also not very close to them for the same reason.

“I was treated differently because they are only four years apart, and they had more life experiences in common, but I was very much the baby,” Thompson said. “Sometimes you just want your sisters to be your sisters instead of your sisters being your moms.”

She is only one of many students at Harvard-Westlake with siblings much older or younger than them. Of 429 students in a Chronicle poll, 43 percent said they have siblings with at least a five-year age gap.

Ninety-six percent said they believe that their siblings have had a positive effect on their lives.

Tiana Coles ’16 feels that her siblings, whose ages range from 26 to 32, have occasionally been more parental around her. Because her siblings all have children of their own, their parental concern sometimes transfers onto Coles.

“In general, I’m a little bit more reserved around them,” she said. “I feel like we can’t really relate sometimes because we’re at completely different points of our lives.”

Coles said that doesn’t mean there isn’t a close connection between her and her siblings.

“All of them are open and ready to support me and see how I’m growing up and how I’m going to continue life after high school,” Coles said. “In general, we’re all just a really happy family, and even though everyone is living in completely different places and living different lives, we’re still a very tight-knit family.”

“We all treat each other equally, and, I mean, they like to pick on me sometimes because I’m really young, but they still love me,” Platt said. “We still all have very close connections, and I don’t think that the age has really affected that too much.”

As the youngest, Platt has found that he has been given more freedom by his parents compared to his older siblings.

“With my older siblings, [my parents] were very strict and testing out all of the new rules,” Platt said. “But with me, the rules have changed a little bit.”

Platt has also found that the experiences of his siblings, all of whom went to Harvard-Westlake, made his school experience easier because he knew what to expect. He also knows what to expect from his siblings’ different occupations but does not feel pressured to pursue a specific occupation because of them. Samantha ’01 is a teacher, Jonah ’04 is a writer and actor, Hannah ’08 is a summer camp program director, and Ben ’11 is an actor.

Coles believes that seeing her siblings work hard and become successful in their occupations has influenced both her work ethic and her outlook on the future.

“My two oldest siblings inspire me a lot because my family doesn’t come from a lot of privilege, and they are perfect examples of being able to surpass an underprivileged lifestyle,” Coles said. “There’s no set outline of what success is in our family, but that knowledge and the comfort that it’s worked out for my siblings is helpful right now.”

Like Coles, Thompson has extra knowledge about certain occupations because her sisters have chosen them. Based on their experiences, Thompson believes that she is more prepared to choose a major and a profession more suited to her personality and interests.

“I’ve seen how hard it is to get into college and the paths that you can take in once you get out of college,” Thompson said. “They both wanted to go into business, and I’m more creative, so I got to see what they had to go through, and they might have influenced me [in that respect].”

“My sister and I are very close,” Yadidi said. “We’re like best friends because we grew up together. With my baby brother, I’m helping him with everything. There’s actually a joke in my family with Seth that he has three moms: my mom, me and my sister.”

Yadidi believes that having such a young brother has made her more compassionate toward her friends and family as she now takes more time to understand their feelings and problems. She also has learned to set time aside to play with Seth.

Some activities that Yadidi and her brother do together include playing soccer in the house or watching Disney cartoon movies. Sometimes, she will reenact scenes from movies such as “The Lion King” or “Frozen” with him.

“[Seth] has become such a big part in all of our lives, and we all love him so much,” Yadidi said. “I think he’s brought us closer as a family too.”