One Call at a Time 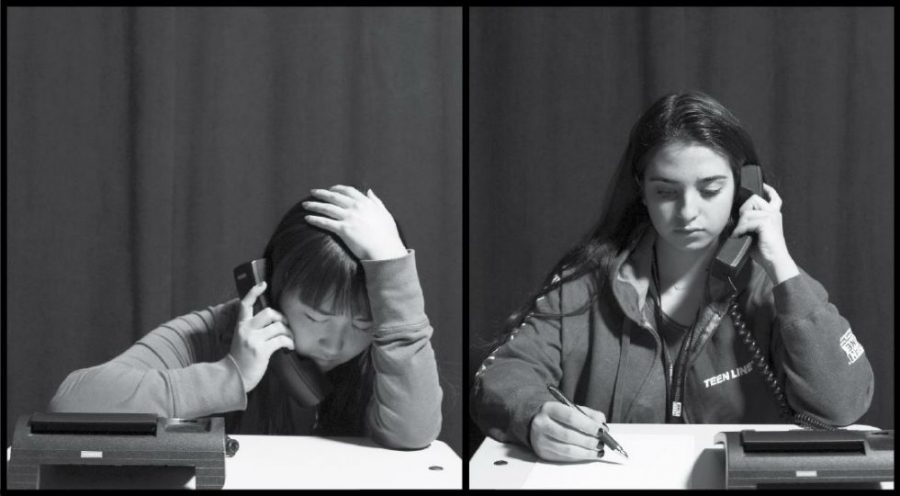 “Hi, this is Teen Line, my name’s Lily,” Alexa Nourafchan ’17 answered the phone, giving a fake name, as is Teen Line policy. She arrived at the offices in Cedars-Sinai Medical Center for her weekly evening shift, but this one was different — it was her first time answering a real call on the line, and she was nervous.

Nourafchan is one of the 18 Harvard-Westlake students who currently volunteer at Teen Line, a crisis helpline operated by teens for teens. According to the Teen Line website, teenagers call in for a range of issues including child abuse, suicide, rape and substance abuse. Founded in 1980 by mental health professionals who worked with teenagers, Teen Line operates every night from 6 p.m. to 10 p.m.

Nourafchan said that her recovery from a car accident when she was 8 years old inspired her to join Teen Line. She was crossing the street and was hit by a pickup truck, leaving her with a broken leg. Having her family’s support during the recovery process was essential, and she realized that many kids in more difficult situations aren’t as lucky. After her traumatic experience, Nourafchan learned the importance of having a strong and reliable support system.

“When I heard about Teen Line, I heard that they provide support for people that are going through such hard situations,” she said. “Since [my car accident], I knew that having someone there for me was really amazing.”

While at an after-school religious class in sixth grade, Serena Davis ‘17 learned about Teen Line and knew she wanted to get involved. Davis saw how helpful Teen Line could be when her close friend was struggling with an eating disorder and was eventually hospitalized.

“She had also been considering suicide, so she called Teen Line, and she said they were what saved her life that night,” Davis said. “I thought it was an amazing organization, and I wanted to apply, but I was too young. So I started it this winter. It’s been an amazing learning experience.”

All new volunteers are considered trainees and go through three months of mandatory, intensive training — two or three sessions a week for three to four hours at a time. After successfully finishing this part of the process, each volunteer is considered an observer and attends shifts to answer emails, do role-plays and listen to more advanced volunteers answer calls. Role-plays entail running through a practice call on all the issues covered while at Teen Line. After observers have passed all 15 role-plays and a listener’s test, they are officially listeners — the highest position — and now respond directly to callers over the phone and by text. Nourafchan is a listener, and Davis is currently an observer.

“I couldn’t try out for the spring musical because I needed that time to do training,” Teen Line listener Natalie Musicant ’17 said. “I had to fly home from a choir trip early to make it to training. It’s definitely a difficult thing to work into your schedule because it’s so demanding.”

Despite this serious time commitment, volunteers say that the experience is well worth it.

“I was apprehensive at first, but someone told me that people even go to training [a day after having] minor surgery, so I figured it had to be worth it,” Davis said. “Even though training took a few hours out of my day, I kind of looked forward to it.”

During training — with adult professionals present — volunteers discuss topics that can be difficult to hear and also share personal stories. Each training session is devoted to a different topic. When the training session is meant to discuss suicide, a parent whose child has committed suicide will visit the trainees to discuss the emotional trauma that is associated with such a devastating experience. During a discussion of self-harm, a volunteer even fainted and they had to call a code blue at Cedars, Davis said.

However, going through training with a whole group of other teens makes it easier, Musicant said.

“The day we did suicide training and heard firsthand stories about suicide, that was really hard to hear,” she said. “But because you’re going through it together with your whole group, you’re able to handle it. You get pretty close with your training group.”

Nourafchan said that one call she heard as an observer really affected her. The caller was actively suicidal, so the resource associates informed the police, and volunteers heard them arrive at the caller’s house over the phone. Actually hearing how they had helped the girl, Nourafchan said, was very gratifying. Though volunteers are never fully certain of a call’s outcome, they said they can generally guess the result.

“Not knowing what happens to the caller is easily the worst part of the position,” said listener Lucas Gelfen ’15, who has been a volunteer for three years.

The responsibility of becoming a listener can be scary, volunteers said. Though helping people is rewarding, it’s still painful to hear what some callers are going through.

“I had one call that was a child abuse call that we had to report,” Musicant said. “It was really upsetting to hear about what a tough time that girl was having, especially because she didn’t even know that what she was going through was wrong.”

Another responsibility listeners have is dealing with prank calls. Nourafchan remembers a prank call from her first shift that referenced a popular YouTube video entitled “Shrek is love, Shrek is life.”

“There are a lot of prank calls that come in — too many, actually,” Davis said. “I think that really upsets a lot of the listeners because they’re making the line busy when someone with an actual issue could need to talk to us.”

While prank calls can be humorous, they inhibit Teen Line’s ability to help others, the key reason they joined the organization.
Nourafchan said that she believes she has changed as a person because of her training at Teen Line.

“The way I act with my friends and family and the way I handle certain situations has totally changed because I have more insight on how what you do impacts others,” she said.
Gelfen also thinks that he has a much greater understanding of his impact on others.

“Sometimes we really don’t understand the power of words on people’s lives, but after helping so many people just using words, I’ve realized the impact that they can have.”