Have you met Molly? 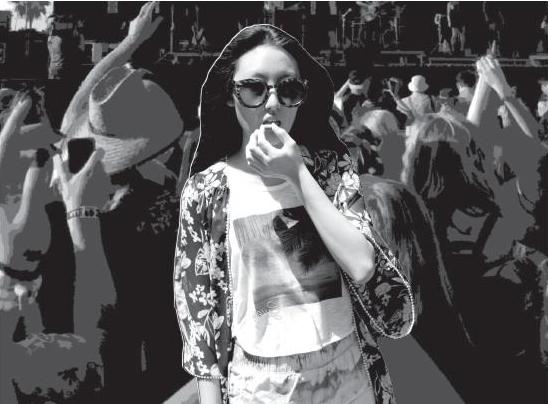 Pockets brimming with pills and powders, a man peddled his goods to the crowd around him as they listened to the latest hits at Ultra Music Festival in Miami earlier this year.

Gerard* ’17 and a friend both decided to take a chance, buy some of the drug colloquially referred to as Molly, and use it.

“It was a really euphoric feeling,” Gerard said. “You feel like there is no other moment in your entire life when you will feel better.”

Gerard and his friend are part of the surging group of high school students in the United States experimenting with Molly, commonly accepted as the successor to Ecstasy, the popular party drug of the 1990s. Molly is a synthetic psychoactive drug that contains the hallucinogen MDMA.

In a poll of 433 students, 4.2 percent of Harvard-Westlake students said they have tried Molly.

The drug’s popularity may be attributed in part to its newfound ubiquity in popular culture, including mentions in songs by recording artists Miley Cyrus, Madonna and Kanye West.

As the popularity of the drug has increased, so have the dangerous results. Government data indicates that emergency room visits by people under the influence of Molly increased 123 percent from 2005 to 2009.

In February, 12 students partying at Wesleyan University were hospitalized after using Molly and drinking alcohol.  Two students were in critical condition and were airlifted to Hartford Hospital, while two others were in serious condition, and the rest were treated at Middlesex Hospital and released days later. All 12 students eventually recovered.

According to the National Institute on Drug Abuse, Molly “produces feelings of increased energy, euphoria, emotional warmth and empathy toward others, and distortions in sensory and time perception. It acts by increasing the activity of three neurotransmitters: serotonin, dopamine and norepinephrine.”
Large amounts of serotonin influence mood, appetite and sleep and also trigger the release of the hormones oxytocin and vasopressin, which affect love, trust, sexual arousal and social experience. However, the brain experiences a serotonin deficit after using MDMA, causing the user to experience confusion, depression, erratic sleep and anxiety.

Another side effect of MDMA is that its users do not feel fatigue. Dr. Timothy Hayes, a psychiatrist who specializes in addiction at Providence Saint John’s Health Center in Santa Monica, has seen multiple cases where partygoers using MDMA danced for hours, grew dehydrated and got hyperthermic, which can have fatal results.

One of the other dangers of Molly is the possibility of ingesting contaminated or adulterated product. Rusty Payne of the Drug Enforcement Administration told Reuters in 2013 that 80 to 90 percent of the drugs marketed as Molly actually turn out to be something completely different.

“The bottom line is that you don’t know what you’re getting,” Hayes said. “It’s very hard for the testers of chemicals to keep up with the developers. It’s a cat and mouse game. The developers are constantly trying to keep one step ahead of the testers.”

Gerard and his friend tried to test their newly-bought pills to make sure they weren’t contaminated, using three different drug testing kits bought on the internet. The websites for these kits claim that they are able to determine the drugs’ contents and potencies.

However, none of these over-the-counter tests, even when all used in tandem with each other, are as accurate as lab tests.

“Nothing is reliable,” Hayes said. “You need liquid and gas chromatography [to truly determine a pill’s contents].”

Because a full lab test is required to determine drug ingredients, it is hard to tell what is actually in pills and powders sold as Molly, making it very easy for people to sell cheap, common, unmarked pills and crystallized powders, which can easily be potentially harmful and even fatal.

For example, methylone is a synthetic stimulant with more harmful effects than MDMA that is commonly found in tested samples of Molly, according to the DEA.
There have been many recent cases of so-called “bad batches” of Molly. Police investigated the possibility that the Wesleyan students who were hospitalized had ingested a contaminated batch of the drug.

In a letter to the student body, University President Michael S. Roth described Molly [as having] “extremely dangerous effects,” according to CNN.

Possession of MDMA is illegal in most countries, including the United States, but that and the dangers associated with it aren’t stopping college and high school and even some middle school students from trying it.

Known as a synthesized “designer drug,” Molly is mainly “cooked” in Chinese drug labs and then distributed to European and American marketplaces, according to Payne. Because of its euphoric effects, like its predecessor Ecstasy, Molly is extremely popular in the musical and party scenes. Many students use Molly at various music festivals and concerts.

Armando* ’16 tried Molly for the first time while attending Weekend One of the Coachella Valley Music and Arts Festival earlier this month. Before he drove to the festival, he bought two doses for $200, totaling .2 grams of Moon Rocks, which are a very pure form of crystallized MDMA even more concentrated than Molly.

“I took one dose 30 minutes before a concert,” Armando said. “I was definitely dancing around and doing weird things, but I was not really feeling anything.”
The concert ended, and Armando went to the next concert, where he still wasn’t feeling anything.  It took two hours for the MDMA to kick in.
“I was just dancing and having a ton of fun and being really social and just happy,” Armando said. “But then the cool down afterwards, once I got back to the hotel, as well as the next morning, were both really uncomfortable. I got depressed, so it kind of just triggered [my depression] and made me really sad for a couple of hours.”

Armando wants to try Moon Rocks again, but he wants to increase his dosage.

“I want to do more because it was a little bit underwhelming,” Armando said. “I think it’s OK to do [MDMA], as long as you do it periodically, in the right situations, and not constantly.”

The clubbing culture associated with Molly can add to its potential danger as well.

“The early signs of intoxication going over toward overdose of MDMA, of Molly, [are] going to be high heart rate, high respiratory rate and high blood pressure,”  Dr. Meika Roberson of Mount Sinai Hospital in New York said, according to drugfree.org. “So if you’re in a club scene, you’re not feeling any of that.”

Bronson* ’15 has tried Molly three times and is willing to do it again if the opportunity presents itself. He first tried it in China.

Bronson was going clubbing with his friends, and he obtained Molly from a dealer in China who shared a mutual friend with him in Los Angeles.

“Things are pretty ‘sus’ in China, but we were going clubbing, and we just decided to hit it,” Bronson said.

Upon reflection, Bronson, who was working through personal issues at the time that he first tried Molly, believes it was a revelatory experience for him.

“The first time I took it, I was able to see so much more about myself and my issues and what was driving different things,” Bronson said. “I understood peer pressure and how much social conformity can influence your behavior. It was a huge revelation for me the second time. I even quit smoking for a little bit.”

Bronson believes MDMA can have real, constructive uses if given the chance.

“It was great,” Bronson said. “Really, really great. It’s hard to explain if you haven’t taken it, but you’re much more open, and you have no real inhibitions, and you can really connect with people more easily. So, in that way, I guess it really is a social drug.”

Armando is also willing to overlook the risks.

“I understand the potential dangers of Molly,” Armando said. “However, I still plan to use it again in the future because the most dangerous aspect of doing it is receiving laced Molly, and I would only buy it from someone I trust.”

*Names have been changed