Heroes or Villains: Superfoods are costly but have advocates 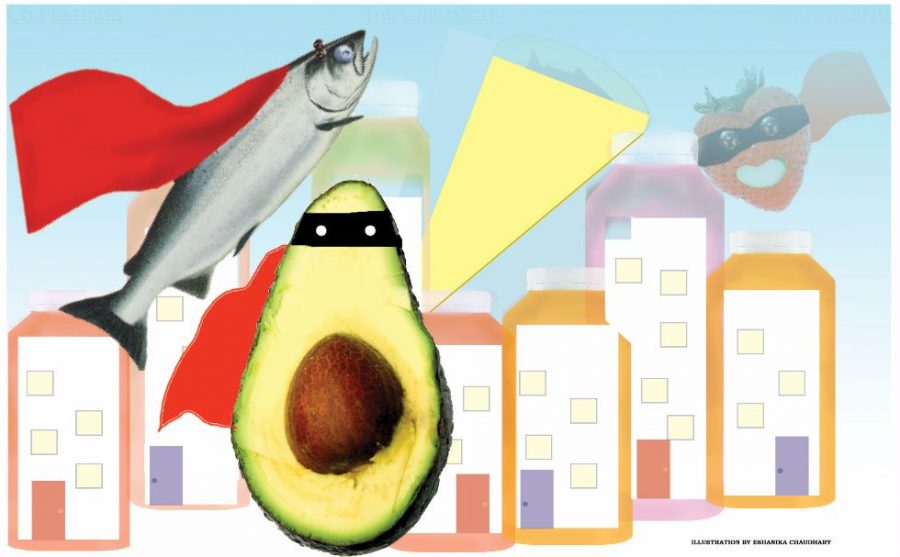 Every morning to jumpstart her day Alyse Tran ’18 opens her refrigerator and pulls out mulberries, matcha powder and maca powder to blend her superfood smoothie, which she says instantly wakes her up quicker than caffeine, while still avoiding the midmorning crash.

“I first tried superfoods for health benefits because I heard a lot about them, and they’re all the rage now,” Tran said.

Although she now primarily eats them because of the taste, she said their effect is noticeable.

“Eating superfoods like mulberries and chia seeds in the morning makes me feel more awake and energized, which is good for when I have to go to field hockey practice or Soulcycle or something,” Tran said.  “I’m dependent on them now, so if I don’t have them I get a little tired.”

Certified nutritionist Debbie Lewis of Yong at Heart Total Wellness Medical Weight Loss Clinic in Encino says superfoods are nutrient powerhouses that contain antioxidants, polyphenols, and vitamins, potentially reducing the risk of developing chronic diseases, such as cancer or diabetes, or even the common cold.

Lily Beckinsale-Sheen ‘17 said she has also observed the benefits of superfoods.

She started seeing nutritionist Phil Goglia, president and founder of health and wellness clinic Performance Fitness Concepts in Santa Monica.  Although he didn’t tell her to specifically eat superfoods, he did encourage her to eat so-called “clean” foods with high nutritional value.

“I would buy [superfoods] at Whole Foods, and they actually say on the outside like ‘this is a superfood.’  At first I bought them because they tasted good, and then I started to go out of my way to blend them into smoothies or put them on top of other foods… and they’re healthy and they taste good which is definitely a plus,” Beckinsale-Sheen said.

After consciously incorporating berries, kale, maca/cacao powder, quinoa and nuts into her diet, Beckinsale-Sheen said she noticed an improvement in the condition of her skin as well as an increased metabolic rate and higher energy levels.

While it is widely accepted that superfoods must have high levels of nutrients, there is no consensus as to how high they must be in order to qualify as a superfood, and there’s no official medical definition.  Lewis says, a diet hyperfocused around superfoods is unnecessary because a diet consisting of a variety of fruits and vegetables will include the same nutrients.  For this reason, Harvard-Westlake trainers said they don’t put emphasis on eating superfoods for students, especially for athletes.

“Our focus is to generally eat clean and healthy, and superfoods can be a part of that, but we don’t place priority on that,” Cross Country and Track Program Head Jonas Koolsbergen ‘83 said.  “Whether [superfoods] are different enough in nutrition to be statistically significant is the question… people are more likely to buy it if it is marked as a superfood than just a normal healthy item.”

Some students agree with Koolsbergen.

“I eat whole foods and nothing processed, but I think superfoods aren’t necessarily better than your average healthy food,” Jenny Lange ‘17 said.  “But some of them are just good so I’ll eat them for the taste.”

Some items marketed as healthy superfoods are also potentially harmful in excess.

Commercialized juice stores in Los Angeles such as Kreation Kafe, Juice Crafters and Pressed Juicery make juices out of fruits and vegetables in their stores daily and have recently grown in popularity and have expanded to multiple locations all over the Greater Los Angeles Area.  Other companies, such as Evolution Fresh and Naked Juice have a similar concept but bottle and sell their juices worldwide in supermarkets, using preservatives to keep them fresh.

Goji and acaí berries, along with other fruits, are often used in fresh-pressed juices and smoothies, but although these juices are marketed as healthy snacks and meal replacements, they can be a sneaky trap. Lewis said that these juices are often high in sugar, even when they have no sugar added due to natural fructose.  Consuming large amounts of sugar can be harmful to the body in several ways such as potentially leading to Type 2 Diabetes.  Also, when so much sugar enters the body at one time, the excess is sent to the liver where it is stored as fat.

Another myth is the idea of using large amounts of coconut oil in cooking, Lewis said.  Fat is essential for healthy hair and skin and is an important component of the cell wall. While coconut oil is a healthy alternative to butter and other oils, in excess its saturated fat content can lead to high cholesterol and heart disease. Coconut oil is being marketed as a clean superfood, causing people to use far more than the recommended intake and ultimately causing this “healthy” food to do more harm than good. Lewis encourages people to limit their saturated and trans fat consumption and instead eat healthy fats such as Omega 3 fatty acids, which can be found in salmon and avocado.

“If you are a healthy eater, eat a variety a day,” Lewis said. “You don’t have to load up on superfoods and have a specific amount of superfoods a day. Eat a variety of veggies, fruits, and whole grains and lean protein like salmon and chicken.  Get variety within a week’s time and you will get all of the nutrients, vitamins, antioxidants.