All Aboard the Fellowship Express 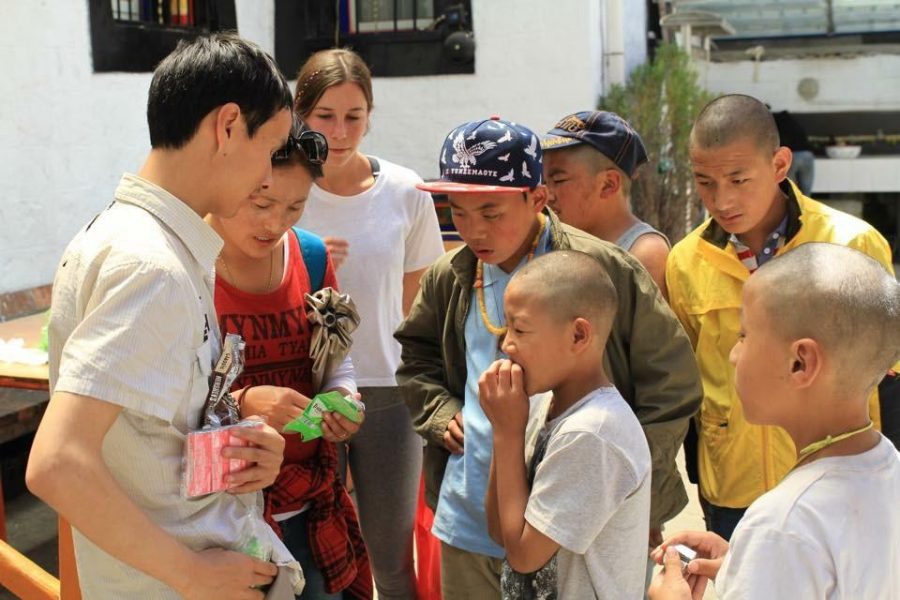 Cami Katz '16 (third from left) passes out candy to visually-impaired children at a Tibetan school as part of her volunteer work for a summer fellowship. Credit: Cami Katz, used with permission

A boy with a toy doctor kit in hand approached Victoria Keating ’16 to give her her daily thousand shots in a span of a couple of seconds.

“The problem was, the first time [the boy gave me a shot], I pretended that the shot hurt by making a noise,” Keating said. “So then, every time we played, it would be a game of how hard we could push the toy shot into my arm until I made a noise.”

As part of her Global Initiative Asia Student Fellowship, Keating spent time with orphans at the Beijing China Care Home, a facility for orphans with conditions such as cleft palates or heart conditions that need surgery.

“It was special because as we had all been adopted, the cause was close to our hearts in the sense that these were also children who were like us at one point,” Keating said.

The trip included both volunteering and sightseeing to explore Chinese heritage.

Because Keating speaks Chinese, she worked with a large group of children.

“Working with the kids was the best [part of the trip],” Keating said. “When you work with kids that young, each day is different because they’re so energetic and creative.”

She also visited the Great Wall of China and an orphanage in Tianjin.

“The kids also really inspire you because even when they have these conditions or difficulties, they are still kids at heart and just as happy,” Keating said.

Elly Choi ’18 watched as a procession of brightly dressed Peruvians walked from an ancient sun temple through the city of Cuzco singing in the Incan language. At this moment, she realized that this is why she came to Peru.

Inspired by her ninth grade Spanish teacher, Anamaria Ayala, Choi decided to apply for the Iberian and Latin-American Studies Fellowship, which she used to travel to Peru to study the Inti Raymi, the festival of the sun god.

“The main goal was to study the Inti Raymi, the festival of the sun god, but while I was there, I also tried to see what the daily lives of the people there are like,” Choi said.

“I thought it was a really educational experience,” Choi said. “I learned much more about the culture than I could have from a book. I felt that I was directly immersed in these people’s lives.”

Cami Katz ’16 stood among thousands of Tibetans and watched as a 40-meter-long canvas painting of the Buddha was unveiled to kick-start the Shoton Festival, a weeklong celebration commemorating the end of the monks’ summer of praying.

Katz studied Tibetan culture during the summer for her project, “Camila Katz, A Window into Mysterious Tibet: Bringing Tibetan Culture and Lifestyle to the HW Community Through Visual Media,” after she received the Global Initiative Asia Student Summer Fellowship.

She was in Tibet from Aug. 4 to 14 and spent most of her time in the capital, Lhasa.

“I learned so much about Tibetan culture and how Buddhism works,” Katz said. “It brought me to understand a lot more about the Chinese government.”

“Katz visited monasteries, religious sites and a school for the blind. She said that although the Chinese have modernized Tibet, people still live very primitively.

“There’s still a ton of nomads and shepherds and yak herders and people that live really primitively,” she said. “What happens with them is they basically live off of themselves. They have a really harsh lifestyle. The positive thing is that there are a lot of foreigners who want to help Tibetans.”

Kaira Muraoka-Robertson ’16 studied deforestation in the Himalayas and assisted in medical clinics in rural Nepalese villages this summer under the Global Initiative Asia Student Summer Fellowship.

As part of a program known as Global Crossroads, she worked in a local nursery in Chitwan for the first week of the trip studying the effects of deforestation during the day and living in the home of a native Nepalese family at night. On days off, she taught children English at both an underprivileged orphanage and nearby elementary school.

“I got to meet tons of really amazing kids,” Muraoka-Robertson said. “The orphanage was fantastic. I learned a lot about their culture, too.”

She spent the next week in the country’s capital, Kathmandu, observing standard healthcare and surgery procedures in a hospital.

She spent one day actively helping out at a walk-in clinic, distributing medicine to patients of all ages.

Afterwards, Muraoka-Robertson spent time in the Chitwan National Forest before going on a four-day backpacking trip in the forest surrounding the Himalayas.

She plans to type up and compile her journal entries from the trip and put together an online photo log documenting her trip.

Truth Cole ’16 spent a week in Italy for her Junior Summer Fellowship. She stayed in Murano, a group of islands in the Venetian Lagoon, for the majority of her trip.

Her project, “Exploring the Dying Art of Glass in Murano”, allowed her to tour glass shops and museums in the region.

“I also did a workshop and blew some glass which was a really awesome experience,” Cole said.

During her visit, Cole viewed the Glasstresse, an exhibit dedicated solely to glass. In addition to her project on glass, Cole also attended the world-renowned Venice Biennale Art Festival. Fifty-three countries participated this year, selecting one artist to represent their nation and display their work in the festival.

“My favorite part of the trip was definitely seeing all of the art at the Venice biennial,” Cole said.

Cameron Stine ’17 said he was amazed when people in Mexico completely opened up to him.

Stine traveled to Oaxaca City, Tlacolula, Teotitlan, Yanhuitlan and Apoala as a part of the Harvard-Westlake Iberian and Latin-American Studies Fellowship program. He spoke to indigenous Zapotec and Mixtec people, learning about the culture and problems plaguing the area.

“I recorded their stories and recorded them speaking in their native languages,” Stine said. “These were some of the poorest people on the earth and coming into their homes was truly special.”

Stine wrote a 20-page paper on the dying culture of the natives, post-9/11 immigration reforms and discrimination. He divided the paper into the stories of individuals and his own stories to try to convey the experiences that are being lost to prejudices against their people. For Stine, however, going to the Guelaguetza celebration was the most memorable portion of the trip.

“The Guelaguetza is a festival held in Oaxaca City in which all the counties in Oaxaca send a group of people to dance,” Stine said. “For many of the dancers, this is their first time in a big city, and displaying their beautiful, colorful culture was amazing. They were so proud of their dances, and they were the best dancers I have ever seen.”

“I thought it would be fun to go on this adventure to find a less touristic route and to find a more authentic and realistic route,” Mahseredjian said.

He traveled with his family to their first stop, Toledo, for two days and later visited a small town called Daimiel. He was pleasantly surprised by how welcoming everyone was.

“It was a more local community as opposed to being in a big city,” Mahseredjian said.

During the rest of his trip, he traveled from village to village, just as Don Quixote had in the novel. The biggest shock that he encountered in this experience was witnessing how many small towns revolved around Don Quixote.

“There are references to him everywhere. The streets are named after him. Everyone knows who he is, and everyone knows the book. I definitely wasn’t expecting that,” Mahseredjian said.

He is creating a PowerPoint presentation for his previous Spanish Literature teacher and is currently writing an article for the Babel, the upper school foreign language magazine.