Josie Baker is a consistent top scorer for Girls’ Golf 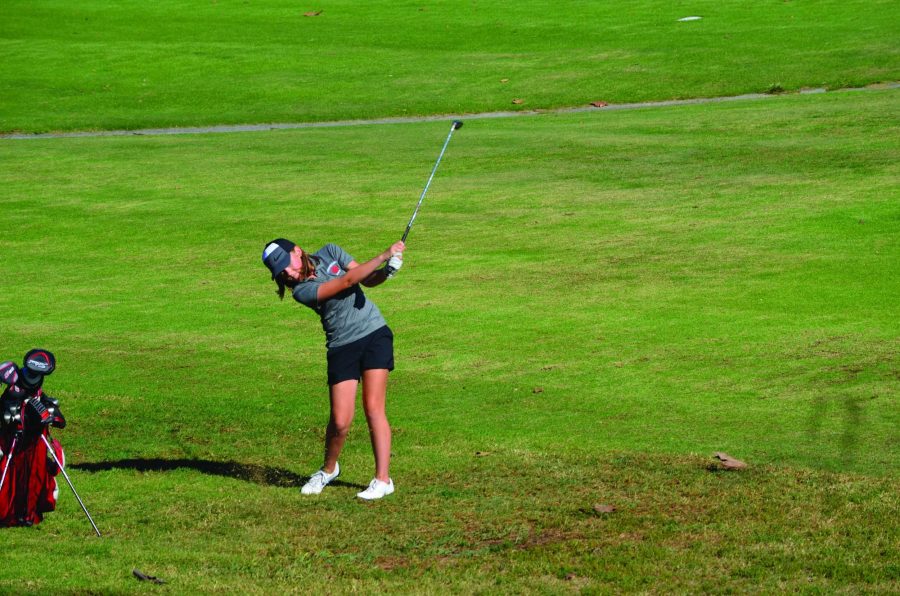 When Josie Baker ’18 finished her second round at River Ridge Golf Course Oct. 27, 2014, she thought she had just missed a great opportunity.

Baker had shot 78 on the first day and was hopeful. Then she shot 86 on the second day, ending what she had believed to be an opportunity for her to make CIF Regionals as a freshman. However, Baker later learned that she was tied and was entered in a sudden death playoff match for the last of six spots advancing to CIF Regionals.

Baker made the most of this opportunity and ended the playoff on the first hole.

“I would say that this was the defining moment of my golf career,” Baker said. “It was my first major accomplishment, and it was really great to be able to play in such a high level tournament in my freshman year.”

Baker won the playoff, and was the only golfer on the girls’ golf team to qualify for CIF Regionals.
This victory was the first in a serious of accomplishments Baker achieved over the past couple of years.
“I started playing golf when I was five,” Baker said. “But I didn’t start playing seriously until about two years ago.”

In her efforts to improve, Baker switched to a new coach based in Colorado and installed a putting green in her front yard. Baker spends one to three hours each day on the putting green trying to become the best player she can be.

Over the past year, Baker played in 2 American Junior Golf Association events, in which she finished in 24th and 10th place. She is currently ranked 600th in the nation.

“I plan to play in college, hopefully for a Division I school,” Baker said. “My hope is that I can play professionally, but I would have to work really hard to get to that point, so I am just going to try as hard as I can to try to reach that goal.”

Baker also states that playing with the team has helped her improve the weaker aspects of her game.

“It has given me the opportunity to both hone my mental game and learn from my teammates,” she said. “Just being able to be helped on a putt or help another teammate read a putt has helped me improve my short game tremendously, and I don’t think I would be this good without them.”

“Josie is by far one of the, if not the, most talented players I’ve ever seen,” said teammate Emma Kateman ’17. “She is 100% dedicated to the team and always gives it her all. She genuinely loves the sport, which is rare to find. This season she has consistently been one of our top scorers, and I know that she will lead our way to number one.”