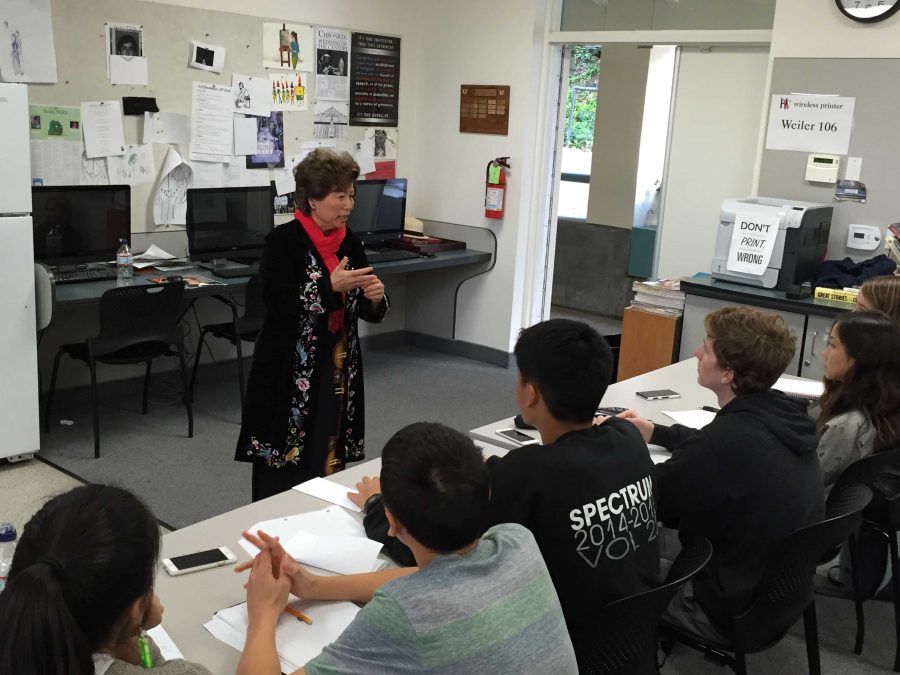 Author and former Vietnamese refugee Le Ly Hayslip spoke to students Monday about her challenging upbringing and how it has shaped who she is as a person.

The San Diego resident, whose life was inspiration for the 1993 Oliver Stone film “Heaven & Earth,” shared her story with students who will take part in the upcoming HW Go! trip to Vietnam, as well as to a government class and two journalism classes.

Hayslip, who grew up in a tight-knit Vietnamese village, was forced to flee her village and move to Saigon at age 14 during the Vietnam War. She had endured torture, rape, moved the United States in her early twenties and suffered two tragic marriages.

Even so, she managed to stay positive.

“Hardships are only temporary,” she said. “Being a good, honest citizen will get you through,” she said.

She said she never thought she would be able to return to her home country, and when she finally did, it was upsetting.

“When I [went back to] Vietnam, I was shocked. The poverty, the poorness. With the embargoes by the United States government, the U.S. [brought] Vietnam way down in the bottom,” Hayslip said.

Inspired to help, she wrote a memoir and founded two non-profit organizations dedicated to bettering the education, health-care, and sanitary practices for impoverished people in Asia.

In the journalism classes, Hayslip addressed the current refugee crisis and what students can do to help. Although Europe has been getting most of the news coverage about the crisis, recently President Obama agreed to allow 10,000 Syrian refugees into the U.S. by 2016. About 70,000 refugees are permitted to enter the country each year.

Speaking from her personal experience as a refugee, she told students to “accept the refugees; open your arms and give them a lot of love” to help them integrate into society.

Hayslip also encouraged students to focus on helping others, as she has done for much of her life, rather than focus on just themselves.

“Many people say to help yourself first; rather, I believe you should focus on helping others. Everything you do for others will succeed,” she said.

Even so, she encouraged students to pursue their interests, too, since unlike her, students at Harvard-Westlake have been given a strong foundation on which to grow.

“I came from a poor background, but I made it. You guys come from good backgrounds, and if I can do it, you can,” she said.