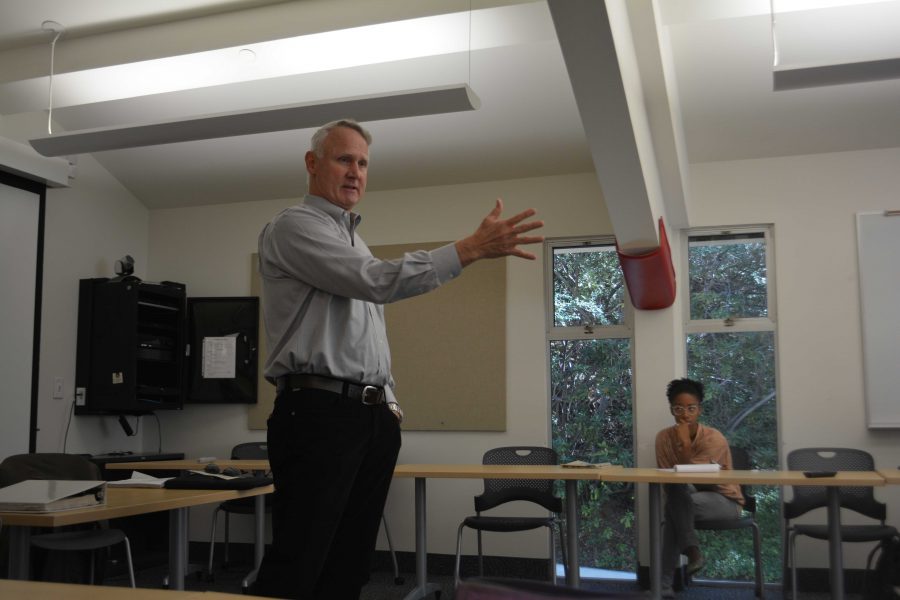 Former Attorney General of Indiana Jeff Modisett (Haden ’16) spoke to the Ethics in Theory and Practice class, Monday in the Kutler Center. Modisett was an Indiana district attorney in State of Indiana v. Michael Tyson and a negotiator during his time as Attorney General in the Tobacco Master Settlement agreement.

Tyson was charged for the rape of Desiree Washington, and was sentenced to six years in prison. As a result of this case, Modisett was also not re-elected as attorney general the following year.

“As [the Tyson case] went through the court system and to the Supreme Court, they honed in on the issue of consent, and they made it very clear that a woman, even if she had given consent, can withdraw that consent; and very few cases had made that explicit up until that time,” Modisett said.

The ethics class has been studying dilemmas such as the comparison between moral and legal concerns, what consent is and when is it morally permissible to have sex with someone.

“We’re concerned about issues of consent on campus as well, and this correlates with investigation,” Upper School English teacher Malina Mamigonian said. “So we wanted [Modisett] to come talk about this major case as it reveals some of the difficulties of the matters of consent.”

The main reason why Modisett wanted to run for Attorney General was to file a case against the Big Tobacco industry. Once he was elected, he helped Indiana became the 20th state to sue the tobacco companies.

“I thought it was going to be the civil case of our lifetime,” Modisett said. “I felt that the federal government has shirked its responsibility to protect its citizens. They never let the Food and Drug Administration have any control over tobacco. I was convinced that the only that would change things would be in the court of law.”

“I had no problem with the lawyers zealously representing Big Tobacco,” Modisett said. “But once they started shipping incriminating documents overseas, that was an overt act that they committed that was a part of the overall conspiracy to conceal from the public the negative health impacts of smoking. You can argue whether it is immoral or not to defend the Big Tobacco company, but it’s clearly, in my opinion, unethical to cross that line.”