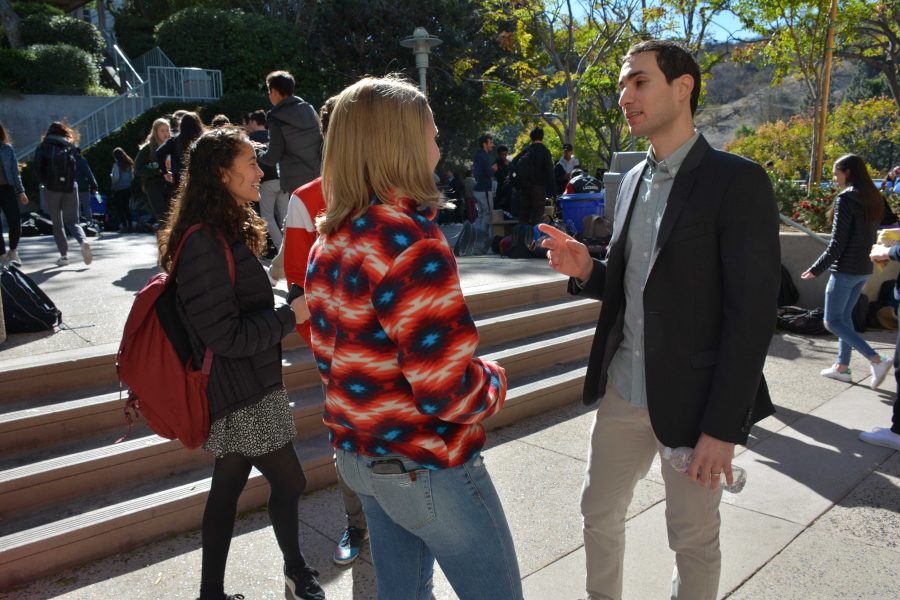 Openly gay athlete and LGBT activist Andrew Goldstein encouraged students and faculty to be mindful of their language and to accept differences in others in his speech at the assembly Monday.

“Let’s try not to make assumptions about other people,” Goldstein said at the assembly. “Be thoughtful about the words you use, and know that something you say can have a significant impact on a person you would least suspect. But also recognize that you have the power to create a positive environment where people feel free to be themselves.”

Goldstein spoke about how hearing his friends and family using gay slurs and homophobic language heightened his fear of coming out and made him feel like being gay was wrong. He said such language, which he referred to as casual homophobia, can be hurtful, even if no harm is intended.

He recalled one “moment of hope” in high school, however, when his teammates read an article about Corey Johnson, an openly gay high school football player in Massachusetts, and reacted positively.

“Knowing that my teammates were reading this article, I was totally scared that they were wondering, ‘Who’s gay in our locker room?'” Goldstein said. “But my teammates just read the article, said ‘Oh, that’s cool’ and went along with their day, like there’s this disconnect between the words they use that I hear every day and how they truly feel when there’s a face to it.”

Despite his fears, Goldstein came out to his lacrosse team at Dartmouth College during his sophomore year. That year, he said, he was having a great year on the field, and, off the field, he’d fallen in love. Both of these circumstances allowed him to say “the two hardest words to say: ‘I’m gay.'”

His friends and family were overall accepting of his sexuality, and Goldstein said he felt surprised and relieved by their support. However, he soon realized that other gay youth were not lucky enough to have the support he did.

“I realized that most gay guys didn’t have the entire lacrosse team to walk around campus and defend them like I did,” he said. “It made me think about how being a great athlete protected me from what it really means to be different.”

Following his coming out, ESPN named Goldstein “the most accomplished male team-sport athlete in North America to be openly gay while competing” and ran a video feature profiling him and his experiences on national television.

After graduating, Goldstein played Major League Lacrosse and earned a PhD in molecular biology from the University of California, Los Angeles, and now works as a research scientist. Although transitioning from the sports community to the scientific community was initially intimidating, he feels that being gay has not negatively affected his professional life.

“When I came to the West Coast to get my PhD at UCLA, I walked in and no one knew who I was, no one knew I played sports, and no one knew I was gay, so I sort of had to come out again, but this time without the crutch of being a great athlete,” Goldstein said. “I had the experience of coming out to all my classmates in graduate school, and being a gay man. That was a huge journey for me. But other than that [my sexuality] really hasn’t been a huge issue for me in my career.”

After hearing how his story had inspired Braeden Lange, a 12-year-old openly gay lacrosse player, Goldstein realized there was more he could do to help gay youth. He co-founded the Courage Game, an organization that seeks to empower and support gay youth through the game of lacrosse. A SportsCenter video featuring Lange, Goldstein and the Courage Game was shown at the assembly as an introduction to Goldstein.

Following his speech, Goldstein answered student and faculty questions about his experiences. And after the assembly, the school held a reception for him in the student lounge. In addition, Goldstein met with athletic coaches, a science class and the lacrosse team throughout the day.

Science teacher Nate Cardin, who was friends with Goldstein at Dartmouth, reached out to him to ask him to speech to the school.

“He brings such a wealth of experience that spans many areas of his life in a way that his story was accessible to each person on a different level,” Cardin said. “His speech was fantastic and perfectly geared toward our community. The message was positive, straight-forward, and honest, and I appreciated that he was willing to be open about his own experiences as a way to try and help others. So many of our students and faculty also had the chance to have one-on-one conversations with him, which I think made a huge difference.”

Students said they appreciated Goldstein’s speech and the ideas of tolerance it promoted.

“I think that the speaker projected a really great message that many people needed to hear,” Gillian Gurney ’17 said. “Many forget that gay slurs are incorporated into daily conversations without second thought. He is such a brave guy and I was very honored to have him speak for us.”