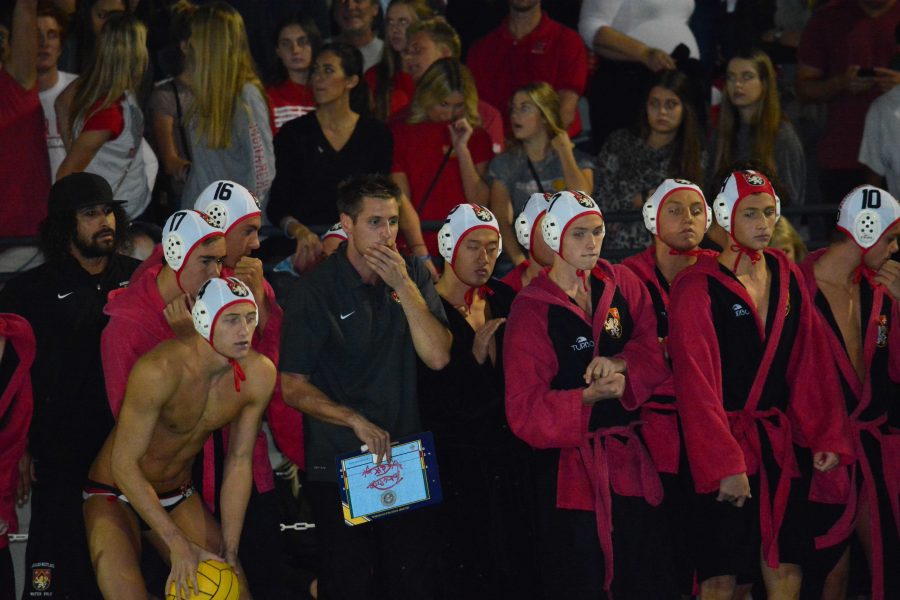 Royal Pain: Head Coach Brian Flacks watch nervously in the 4th quarter. The Monarchs hung on to their one goal lead to win 9-8. Credit: Matthew Yam

Alec Mendelsohn ‘17 scored 3 goals in the third quarter for the Wolverines, but the two-time defending champs were shut out in the fourth quarter.

What Mendelsohn believed to be the most memorable moment of the season was still fresh in his mind.

“I would say right before the fourth quarter started, just, we were in the pool…in the huddle, and I think it’s just the highlight because [Head of Aquatics] Coach [Brian] Flacks ‘06 said to us, ‘Win or loss, we’re still a family,’ and I think that epitomizes just how close we are as a group,” Mendelsohn said. “…we’re still family and I’m so proud to be a part of this team and of how much we accomplished.”

After the trophy ceremony, Flacks pulled his team aside. The entire team could be seen sitting on a small flight of stairs in a back corner of the pool deck as Flacks spoke to them for about 20 minutes. At the conclusion of the speech, the group disbanded and drifted toward family members, but not before Flacks embraced each individual player.

The relationships I have with the kids, it’s a pretty special thing,” Flacks said. “I get to see them everyday, maybe more than their families get to see them, and I’ve kind of grown up for the past ten years with these kids… Win or lose the championship game, I’m more proud of the young men they’ve become and they’re growing into. The water polo is secondary to that, just what great kids I get to coach every year.”

It was the Wolverines’ third consecutive loss to the Monarchs, who retook the throne after losing to the Wolverines in the championship game the previous two years. Details to come.