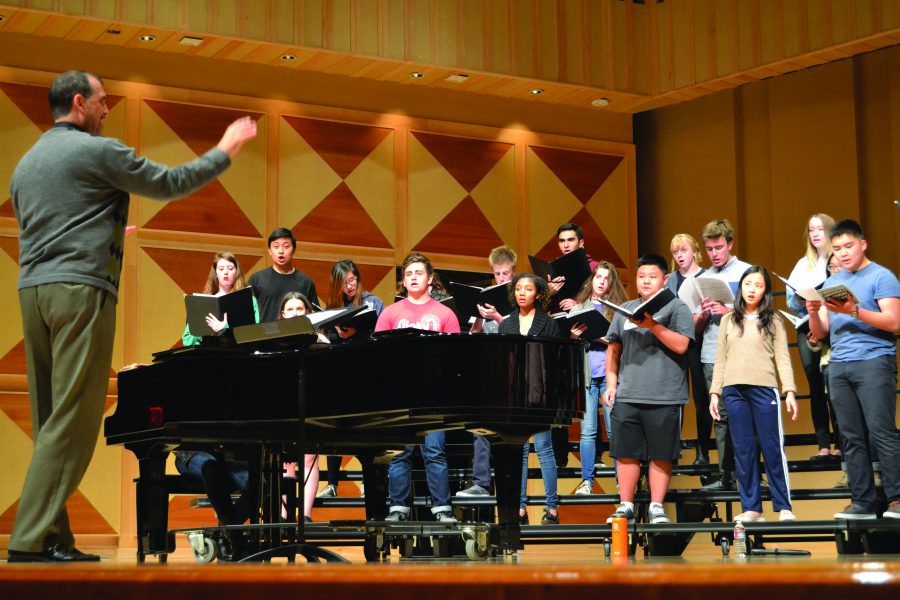 PRACTICE MAKES PERFECT: Led by choir director Rodger Guerrero, members of Chamber Singers, Wolverine Chorus and Bel Canto practice “Come To Me, My Love” during the choir tour last year around California. All of the choirs came together to sing various mixed pieces and sang in women’s and men's groups. Credit: Su Jin Nam/Chronicle

Performing arts teacher Rodger Guerrero will be leaving Harvard-Westlake after 15 years to teach adults music education in the hopes of giving back to a community that has given him so much.
“Trophies don’t matter that much, but that one does,” Guerrero said as he glanced to his left to see the large, red trophy standing on the file cabinet among many others beside it and plaques scattered around the room.
The trophy is from the first state championship that Chamber Singers won during his second year at the school.
“I turned around, the kids walked out and I came out, bowed to the audience and said, ‘This is Harvard-Westlake Chamber Singers. We are going to sing this, this and this,’ and I turned around, and the kids were in perfect spacing,” Guerrero said. “They had worked it out like only [Harvard-Westlake students] can. I went, ‘Wow,’ and I looked at them, and I said ‘I wouldn’t want to be the choir that follows you after what you are about to do.’ ”
Guerrero has been conducting and teaching choirs at various schools for 30 years.
“[I just want to] give back to a community that’s given me so much, and I feel like that kind of job, helping older students learn how to be music teachers, would be a lot more beneficial for me personally in the music community,” Guerrero said.
Even though he looks forward to the next step, Guerrero will miss the friendships he has made and experiences he had at Harvard-Westlake.
“[I will miss] the one-on-ones, the incredible students I’ve met, the people I’ve met, that I’ve been allowed to work with each and every one of my students every time we meet, and then, I will miss the little things like tours and festivals and the joking around and then getting to watch all of the other things that [my students] do so well.”
While he has taught at Harvard-Westlake, Guerrero has affected and inspired many people, including many of his students who have been in his class for three years.
“He has probably been one of the most influential people in my high school career,” Chamber Singers and Jazz Singers senior Elizabeth Edel ’16 said. “I have learned so much about music in [his classes], and I can’t imagine what [Harvard-Westlake] would have been like without him. He is one of the most knowledgeable people I know, and he is so willing to share his knowledge with all of his students. He really is quite incredible, and I am so grateful I got to study under him for three years.”
Guerrero feels that his time working at Harvard-Westlake will help him to more effectively show his future students how to teach teenagers.
“Because I have spent 30 years working with 15-year-olds and interacting with them, [I will teach my students that teenagers are] as smart as 20-year-olds are, and they don’t want to fail. They want to please; they want to feel good about themselves,” Guerrero said. “They shouldn’t treat them like children. Treat them like another adult with respect and with care and with dignity, and don’t speak down to them. Speak up to them.”
Guerrero hopes that this knowledge, along with what he has learned working to receive his doctorate at the University of Southern California, will help him communicate with his students.
“Teaching is basically about human interaction, so, because I have been able to interact with the smartest, most wonderful kids on the planet, [I know] what is possible for all students,” Guerrero said.
In addition, while at Harvard-Westlake, Guerrero has significantly changed the structure of the choral program, changing, removing and adding choral groups to create the four classes at Harvard-Westlake today.
Guerrero said he strives to make each of those classes enjoyable and light-hearted every day.
“I don’t go to the other classes to see what the environment is like, but I feel like we laugh a lot. I think that’s really important,” Guerrero said.
Guerrero also said that he has high expectations for the future of the choral program at Harvard-Westlake and is excited about the changes that will take place after he leaves.
“I hope [the program] will be the same or better. However it changes is a good thing. Change is not bad,” Guerrero said.
Guerrero also hopes that the students will take on more responsibility and carry on the legacy of the program.
“I have complete faith that [my students] can do it,” Guerrero said.