Girls’ Volleyball falls in second round of CIF Playoffs 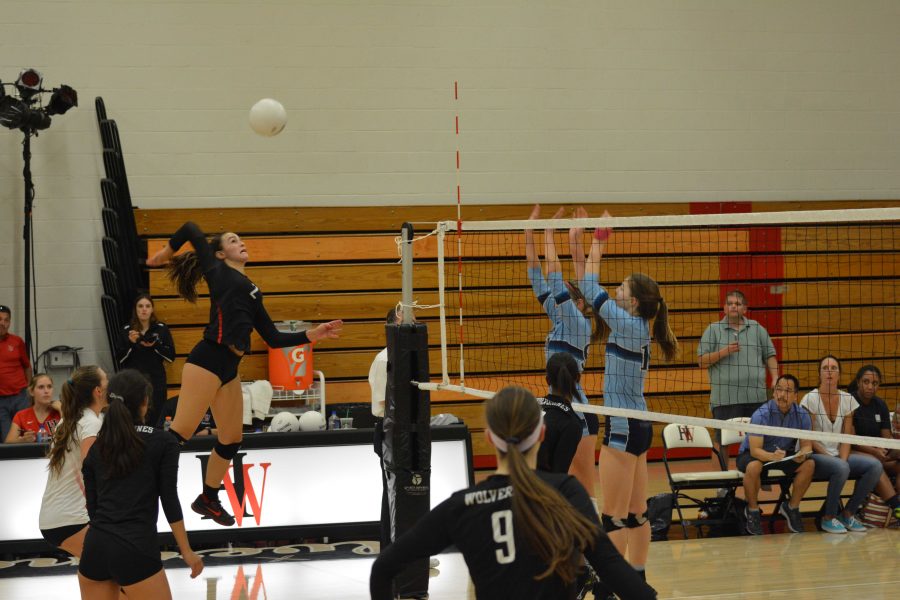 Smack Down: Bella Hedley jumps to spike the ball in the Wolverine's loss to Huntington Beach. Credit: Dario Madyoon

After beating St. Joseph in four sets in the first round of CIF-SS playoffs, the girls’ volleyball team had its season brought to an end by the Huntington Beach Oilers Nov. 13 in a five-set loss.

The squad ended the season with a 5-3 record in league play and a 23-10 record overall, a large improvement from its 2-6 league record last year and its 13-17 record overall.

Despite losing the final game of the year, this season marks a great improvement for the Wolverines, who were unable to make the playoffs at all last year in a new and improved Mission League that added rivals such as Marymount and Marlborough.

“I’m just so proud about how we finished, because that last game was 100 percent effort, and it showcased exactly what we’d been working for all season,” Team Captain Josie Treadwell ’16 said. “That last game and our entire season was so great for Harvard-Westlake volleyball as a whole, too.”

The Wolverines will look to build on this season’s improvement and look past the difficult defeat they suffered in the last game.

“Sometimes we make mistakes and that’s just how it is, but we always come out of games like the last one ready to persevere and come back better than ever,” Head Coach Adam Black said.

Even though the squad will lose six seniors, four of whom were starters, the squad has an exciting new crop of talent from the junior varsity squad that is looking to make an impact on the team.

“Coach Black really tried to bring the entire program closer together this year instead of just varsity,” middle blocker Courtney Nunley ’17 said. “We got a lot closer with the junior varsity girls this year so I’m excited to get a chance to play with them next year because I think they’re really excited to get a chance to be on varsity and make a big impact right away.”

However, the players most hungry to prove themselves next year are the juniors who were on varsity this year.

They will be looking to fill the void left by the seniors and take on the challenge of leading the team deeper into the playoffs than they have ever been before.

“The most important thing I’ve learned from the seniors is that they give 100 percent all the time and they lead by actions instead of words, so that’s what I’m going to try to do next year when I need to be a leader for the team,” Nunley said. “Even though I know there’s going to be a big hole after they leave, I know that we can step up and play our part.”