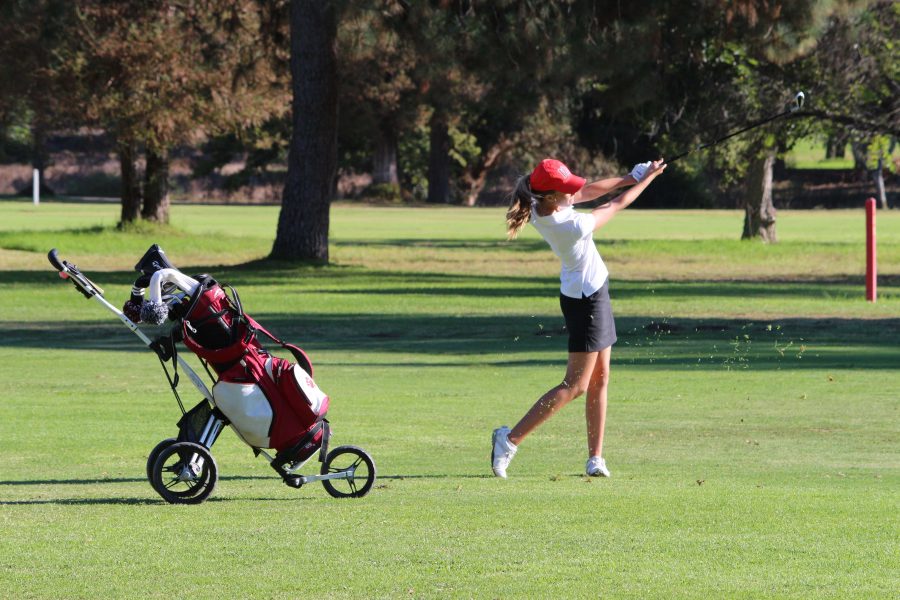 Following through: Josie Baker chips the ball in the match against Marymount. Credit: Bennett Gross

The girls’ golf team finished its season with a record of 5-2 in both league and season.

“It was a rough round,” Hong said. “Obviously the rain didn’t help, but we still could have fixed a lot of the problems by being more attentive. Little things here and there could have been enough for us to progress onto the next round of CIFs.”

Baker and Guo also qualified for the CIF Individual Regional Playoffs. Baker shot 80 and 77 to make it to this section, and Guo fired off an 81 and 77.

However, in the CIF Individual Section, which was also held at Soule Park Golf Course, Baker fell after shooting an 83, and Guo progressed after shooting a 77. However, Guo did not qualify for the CIF State Championship.

“We’re both pretty upset because we made CIF last year but didn’t this year,” Baker said. “But this is just another factor for us to try even harder for next season, so we don’t have to be disappointed again.”

The team looks for a more hopeful future next year, with returning players Baker, Guo, Wang, Hong and Claire Dennis ’18.

“I really hoped that we could make it farther in CIFs this year, given that it was Song’s last year,” Baker said. “But we didn’t make it, so all we can do is work on improving ourselves next year. I also hope that we can do better in the team section, because I want to have the feeling of accomplishment with the team, not just by myself.”

The team also looks to strengthen their team with incoming Daisy Wan ’20.

“I’ve played with her a couple of times in the past,” Baker said. “Daisy is a great player with a lot of potential. I think she would be a great addition to the team and would fit in really well in our team chemistry.”

“I know these girls, so they’re not going to relax during the offseason,” Chamberlain said. “By next season, Josie and Karina will have practiced a lot and become much better than they were this year. The other girls will also get much better, so I have full hope that we can do so much better next season.”

“My goal for the next season is to qualify for CIF, in both the team and individual categories,” Baker said. “During our last season, we didn’t perform to our full potential. If we do perform at our best, I believe that we can achieve that goal.”