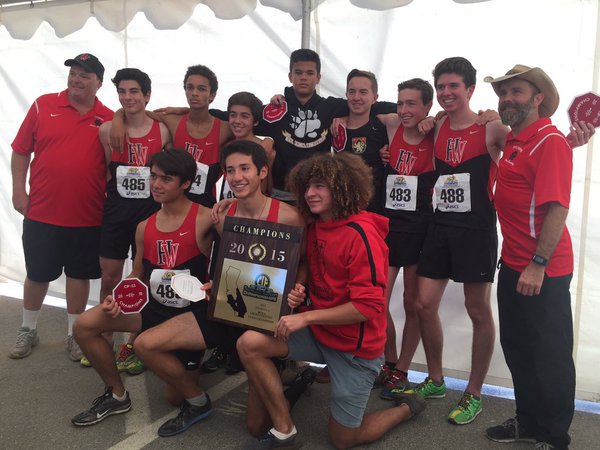 The boys’ Cross Country team won Division IV CIF-SS and qualified for California State Finals, which will take place in Fresno on Nov. 28.

“We are all incredibly excited about going to state,” Nate Hollander ’17 said. “We were expecting to go to state, but not as the Southern Section champions. I don’t think anybody expected us to win, but we ran well as a team and got the job done.”

Last season, the boys’ team failed to qualify for state, but used their loss to motivate themselves towards this year’s’ success.

“There were very, very hard feelings there, and we talked at the time about it being okay to feel bad, but then you’ve got to choose what you want to do from that point forward,” Head Coach Tim Sharpe said. “And obviously, they made very good choices, from that point forward, about what they wanted this year to look like, and they took it all the way to the top.

From the beginning of the season, the team remained optimistic that they would be able to accomplish more than the previous season.

“You think ‘can we be in the mix’ and you make that your focus,” Sharpe said. “And as we arrive closer and closer to the end of the season, we talked very openly about being at least able to say ‘we could do it,’ and coming up with a plan on how we can try to do it”

Cross Country Program Head Jonas Koolsbergen was pleased with the results of the season as a whole.

“This group of athletes is a very special group to coach because they are a group of excellent young people as well as tremendous running athletes,” Koolsbergen said. “We had the largest team in school history and one of the deepest teams in terms of talent in the history of our fine program.”

The girls’ team placed 12th out of the 16 teams at the CIF finals. The team qualified for CIF out of the 88 schools in their division.

Koolsbergen believes that any time an athlete plays in a championship is a special opportunity.

“The girls’ season was strong. We didn’t do all the things we wanted to do, but still, to be a CIF finalist, and to be in that position where it’s still a very strong team, but we didn’t achieve everything we wanted to achieve. Just to be in the finals and make that top 16 is very special.”

Koolsbergen believes the team will be able to continue with their success next season.

“Our program has depth and excellent athletes in all grades so a continuation of excellent results is definitely expected,” Koolsbergen said. “The change will simply come from the changes in the rosters. Seniors will move on, and new athletes will join us and add their particular gifts to what we do.”