Virtual Venom: The effects of cyberbullying 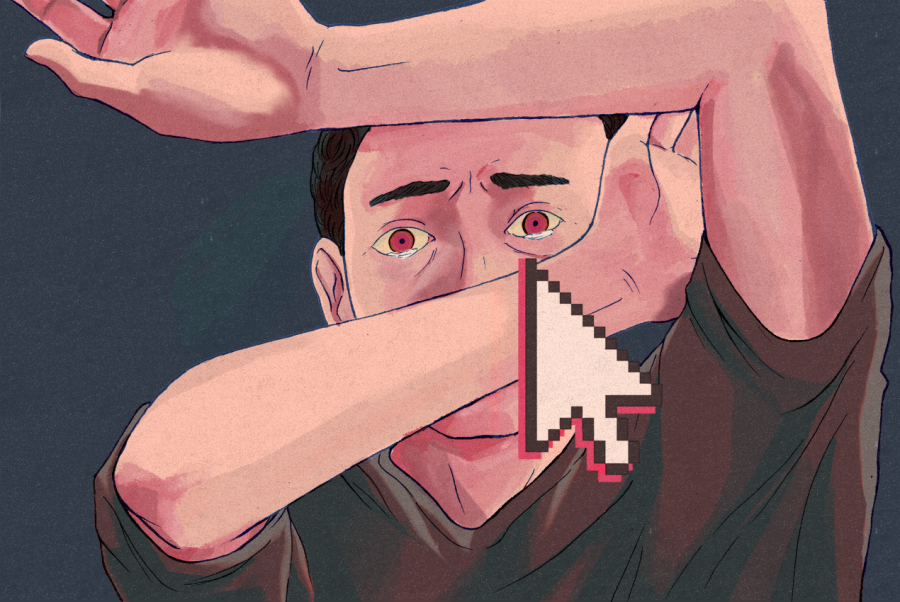 “Fat,” “ugly” and “slut” burn into Lola’s* ’18 mind as she scrolls through a Facebook page with line after line of scathing attacks. As a seventh grader reading comments suggesting she should kill herself, she has never forgotten the feeling to this day.

“I felt so small and that everyone hated me,” Lola said. “I thought that I had no friends and was in a very dark place.”

In 2014, the Centers for Disease Control and Department of Education defined the core elements of “bullying” as unwanted aggressive behavior, observed or perceived power imbalance and repetition of behaviors or high likelihood of repetition.

In a Chronicle poll of 363 students, 33 percent of students said that they have been targeted on social media and 73 percent reported having witnessed someone they know being targeted.

“It’s basically a new word for the old term ‘harassing,’” counselor Luba Bek said. “If you’re harassing somebody, doing something unpleasant or deliberately unpleasant to another human being, it used to be called ‘harassing’ and ‘being mean,’ but now it has a name, ‘bullying.”

Bek said cyberbullying is not as prevalent at the Upper School compared to the Middle School.

Lola also said that she has not experienced the same level of bullying since coming to the Upper School.

“Middle school kids have less of a prefrontal lobe cortex to control their impulses and actions,” Bek said. “But it happens here too, but no increase whatsoever.”

Recent honor board cases described during class meetings that involved bullying over Twitter and other social media have shown that cyberbullying is still an issue at the Upper School.

Though Bek was not at liberty to comment on the cases, she explained, as the peer support advisor, the consequences leaders or trainees must face.

Bek said that when these “slip ups” are minor, some students will get second chances if they show that the are “truly remorseful” and “learning from the mistake.”

Some students who have witnessed cyberbullying have experienced that it can lead to more.

Mikaela Wolfsdorf ’16, whose friend was cyberbullied, explained that though it began only with light jokes on Twitter, it soon escalated into face-to-face bullying.

Wolfsdorf and Bek believe one of the pitfalls of cyberbullying is buying into the false sense of distance and anonymity of social media sites.

“Your generation is so used to doing everything online,” Bek said. “And there’s so much more to language than words that, when you say something to a person face-to-face, their facial expressions and their non-verbal cues might not come off as bullying. I think a lot of things that happen get started where people join in totally innocently, but you cannot understand sarcasm without non-verbal cues, and it’s going to snowball.”

Wolfsdorf believes the students who bullied her friend were not trying to be mean, but funny. She said they didn’t understand that the jokes were seriously hurting her.

Bek believes that “mean, intentional bullying” is caused when people are “delusional” in their thinking.

Many accounts upload posts that ask their followers to write in the comment section about a specific person.

Although only the account user and the commenter know the name of the person being written about, the comment itself can be seen by anyone who follows that account.

Eventually, this bullying does diminish, and Bek believes that it will decline after college, when people start “having other interests in life and the social media world is different.”

For now, however, Bek suggests that as a friend or witness, “your role is to provide unconditional love and positivity to the person and listen, empathize and support.”

“Do not negate and try to get the person who is bullying, but give the person your unconditional love,” she said.

One of the most common mistakes for a friend or victim is to try to point fingers at who perpetrated the cyberbullying, Bek said.

“The witchhunt is never a good thing,” Bek said.

For Lola, her experiences have taught her to try to be an advocate of anti-bullying.

“I try to shut it down immediately because I don’t want anyone to feel how I did,” she said.

Bek said that there’s no point in trying to avoid social media, because “that’s where you live.”

“Treat [social media] as real life, and be a nice person,” Bek said. “What other people think of you is their business, and this applies to cyberbullying.”