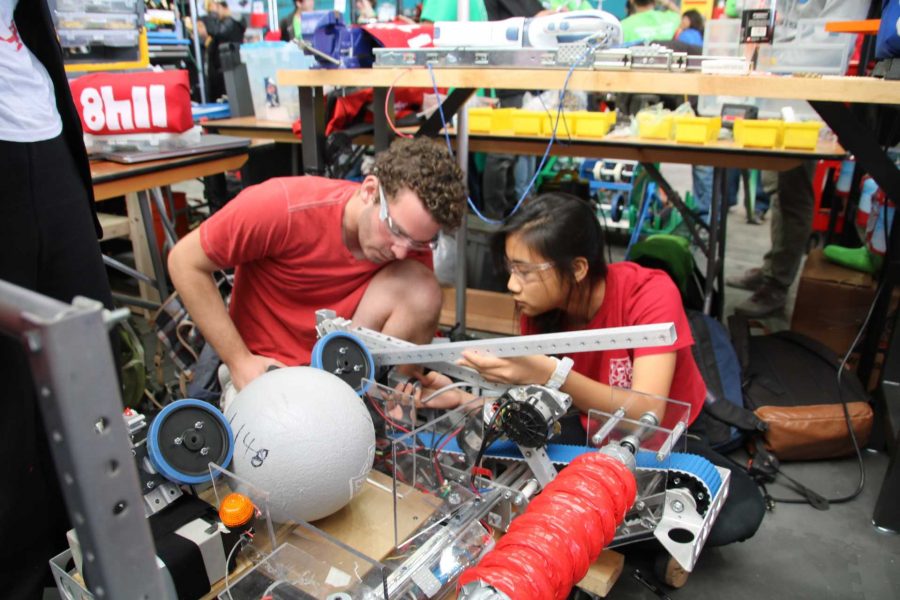 Wafflebots members Johnny Berman '17 and Samantha Ho '17 work on the team's robot, 1148, in preparation for their first competition. Printed with permission of Isobel Phillips

The robotics team, also known as the Wafflebots, placed 27th out of 60 teams at the 10th Annual San Diego Regional FIRST Robotics Competition March 2-5, where they showcased the robot they built and programmed this year.

Competing in “alliances” of three teams, students programmed their robots to complete obstacle courses, throw balls into targets and play games against opponents. The game selected this year was “First Stronghold,” in which teams score points by breaching their opponents’ stronghold defenses.

Teams participated in qualification rounds, where they earned points based on their robot’s performance. The eight teams with the highest ranks moved to the final round of the tournament.

The Wafflebots’ robot has a tank drive and arcade drive, which allows team members to control the robot as if they were playing a video game. Paul Lahera ’16 programmed the robot with help from Nomi Ringach ’17 and Johnny Berman ’17.

“In past years we have scrambled to finish the robot in order to partially accomplish the tasks in the competition, but this year we managed to complete the robot before the competition, which was amazing,” Isobel Phillips ’17 said. “The team works really well together, which helped so much in completing everything we had planned to do.”

To prepare for this regional tournament, which is their first competition of the year, the robotics team met on the weekends and after school. Throughout the year, they built mechanisms for the robot, programmed it and tested it.

“We’ve been preparing for this for quite a while, and we were much more organized than in years prior,” Rasa Barzdukas ’17 said. “It really ended up paying off because we ended up doing a lot better than we ever have before. The team works so well together, and we combined all our strengths into one amazing robot.”

With a record of 4-5 in the qualification rounds, the robot was selected as one of the eight alternates for the final round. This weekend, the team will compete at the Los Angeles regional tournament.