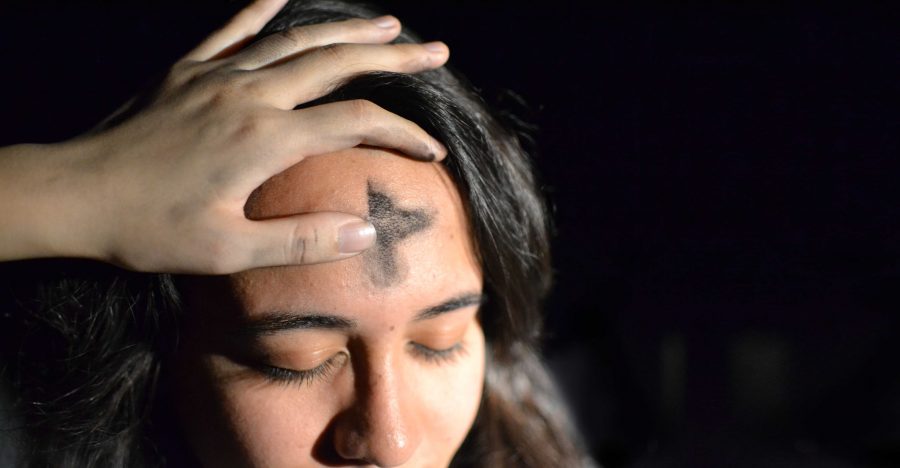 Every year when Ash Wednesday comes around, people emerge from St. Saviour’s Chapel after a service with the ashes of palm leaves on their foreheads, marking the start of the Lent.

There are both religious and secular students who observe Lent, the 40-day period when Christians prepare for Easter Sunday through fasting and service. Seventeen percent of the world’s adult population participates in Lent, the majority of which are Catholics or Protestants, according to the website of the Barna Group, a research and resource company on faith and culture.

Ash Wednesday is most commonly the first day many Christians give up a good, habit or vice in recognition of the 40 days that Jesus spent fasting in the desert. Lauren Weetman ’16 and her mother are giving up sugar, and her brother is giving up Youtube videos.

“[Lent] can be perceived as a way to give up something that you normally wouldn’t have the willpower to do or you wouldn’t normally give up [but] that you know has a negative influence on you,” Weetman said. “It can also serve as a reminder to yourself that when you really want a cookie, or in the case of my brother, really want to watch those other video game Youtube shows, you’re giving it up for Jesus and it’s all for a cause. In our daily lives, it’s a slight reminder of our faith.”

Courtney Nunley ’17 has observed Lent since she was 10 or 11 years old.

“My mom had always practiced Lent, so I observed it for a while before I started,” Nunley said. “I eventually asked to participate when I was older because it was hard for me to participate in something I didn’t really understand the religious implications of. I think I gave up candy the first time.”

Instead of giving up a good, habit or vice, some Christians do more charitable work and pray more frequently.

“[My family and I] just try to do extra service,” upper school history teacher Gregory Gonzalez said. “We don’t really give up candy or anything like that. We try to do extra help with the church and that sort of thing at the two parishes we go to. Sometimes I get my students involved. I’ll collect either food or small donations to contribute to a food bank.”

However, some no longer view Lent as primarily a time of spiritual purification.

“For most people, the common question you get asked as a Christian is ‘What did you give up for Lent?’” Father James Young said. “And I think it has perverted the original intent of Lent because for a lot of people, Lent has become a convenient time to diet, or to give up smoking or to do things in their life that they know darn well they should be doing anyhow, and it becomes a convenient time to do it. That detracts from what the real intention is. The real intention, really, is to focus more on God.”

Young has led Ash Wednesday services at St. Saviour’s Chapel for 19 years. While marking a forehead with an ashen cross, he has always said, “Remember that you are but dust and to dust you shall return.”

“The significance of Ash Wednesday is to remind us of our humanity,” Father Young said. “It is a humbling experience.”

Ash Wednesday services have always been held on the upper school campus due to the religious affiliation of the school.

“We had a really good turnout for Ash Wednesday on both campuses,” Young said. “It’s interesting that it has become the single most well-attended time for people to go to our chapel on Ash Wednesday. In terms of religious acts, Ash Wednesday has definitely become the primary choice in terms of number of people that attend.”

An increased number of secular students have begun to practice Lent alongside their Christian counterparts. Carlos Guanche ’16 has observed Lent the past three years as motivation to eat healthier.

“[I started to participate in Lent] because it provided an excuse to better myself,” Guanche said. “It’s like when you give yourself a deadline to motivate yourself to do something.”

Others partake in Lent alongside friends.

“A friend of mine gave up all drinks other than water this year, and I know he’s not really religious,” Shannyn Schack ’16 said. “It’s just like [he’s participating in a] challenge with me.”

Like Schack, a friend of Nunley is observing Lent to provide her with “moral support,” though Nunley said she would rather observe Lent by herself.

“I would prefer to participate [in Lent] independently because it gives the most genuine outcome of how far I can push myself to keep going,” Nunley said.

Although Lent is not always celebrated in its purest sense, Young said he believes recognition of the religious practice is always beneficial in that it calls attention to Christian morals.

“I’m happy whenever anybody celebrates Lent,” Father Young said. “I don’t really care how they do it. I’m not a purist, and I’m just happy to see people in this community or any community recognizing Lent, even if I would say they’re misunderstanding a little bit.”