Wolverines defeat Panthers in first round of state playoffs 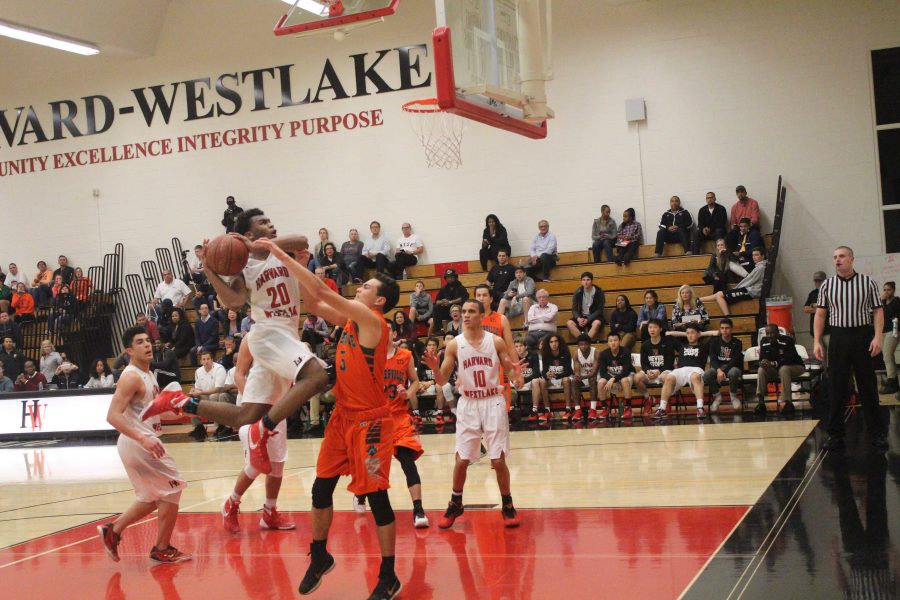 L Simpson '19 drives to the basket during the second half of the game. Credit: Cameron Stine '17/Chronicle

Despite not playing stars Cassius Stanley ’19 and Wolfgang Novogratz ’16 in the first half due to disciplinary actions, Head Coach David Rebibo and the Wolverines were able to defeat Porterville 83-52 in the first round of the CIF Division IV State Playoffs.

Ali Iken’s ’17 return from an ankle injury he suffered in the quarterfinals of the CIF-SS 4AA playoffs proved to be crucial for Harvard-Westlake as he along with Carter Begel ’17 were the main sources of offense in the first half for the home team.

The Wolverines started out the game with the lead on a Begel three pointer, and never looked back. He and Ray Mueller ’17 combined for the Wolverines’ first ten points of the game.

Iken got into the mix at the end of the first quarter by hitting a three pointer to give Harvard-Westlake a 17-6 advantage. The Wolverines ended the quarter on a 10-0 run.

Throughout the second quarter, the Wolverines continued their dominance and took a 36-19 lead into the locker room.

At the end of the first half, Begel had 10 points, Iken chipped in with seven and Henry Vogel ’16 had nine.

With Stanley and Novogratz back in the lineup, the Wolverines continued their domination of the Panthers, consistently maintaining at least a double-digit lead.

The Wolverines controlled the boards during the second half, with L Simpson ’19 and Mueller contributing with easy put backs and second chances on the offensive end.

As a result of the Wolverines’ superb offensive rebounding, Iken found himself with several open three-point opportunities and he delivered. Iken finished with 19 points overall on five three pointers.

Mueller finished with 12 points and 12 rebounds, Simpson ended his first start with eight points and seven rebounds and Nathan Yeh ’16 completed the game with three points.

The Wolverines kept up the intensity throughout the second half and cruised to an eventual victory to advance to the second round of the CIF Division IV State Playoffs, where they will face Mission League foe Chaminade on the road on Sat. at 6 p.m.

The Wolverines won both regular season with the Eagles; however Chaminade was without star point guard Josh Hauser ’16 in the first meeting.