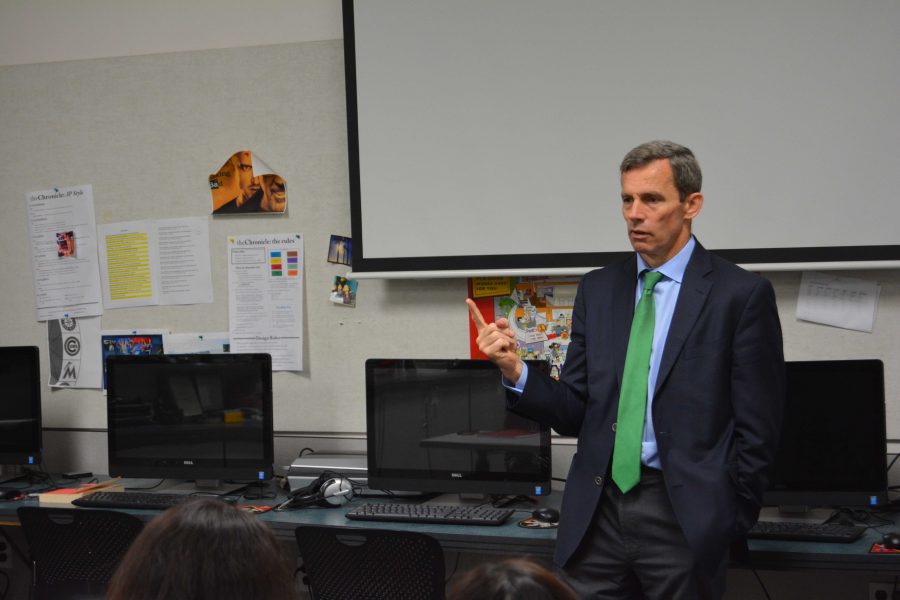 President and CEO of the Los Angeles World Affairs Council discusses the challenges he faced while reporting on the war in Afghanistan with journalism students March 9. Credit: Aaron Park/Chronicle

President and CEO of the Los Angeles World Affairs Council Terry McCarthy discussed the role of journalists as foreign correspondents and the need for Americans to become aware of world issues in both history and journalism classes Wednesday.

The Los Angeles World Affairs Council is a non-partisan foreign affairs forum that features guests including President Bill Clinton, Founder and CEO of Tesla Elon Musk and Pulitzer Prize-winning journalist Mei Fong. McCarthy conducts the interviews and moderates the forums in a discussion-like manner to get the most out of the talks, he said.

After studying philosophy at the University College Dublin, McCarthy chose a career in journalism because of the correlation between ethics and interviewing, he said. He has since worked for news organizations such as Time Magazine, ABC News and CBS News, covering politics, business, military and environment issues.

As the Principal Baghdad Correspondent for ABC, McCarthy, who speaks six languages, covered the trial and execution of former Iraqi President Saddam Hussein and everyday lives of Iraqis during the war. He said that it was during his time as a foreign correspondent that he learned the importance of being an unbiased journalist as he had to be diligent in not showing any bias towards the United States.

McCarthy urged journalism students to develop a rapport with sources to obtain as much information as possible that can be shaped into a narrative. At the same time, he warned students about putting too much trust in a source and to be sure to remain unbiased as nobody has a “monopoly of the truth.”

While in Afghanistan working with CBS, McCarthy was embedded with an infantry battalion of United States Marines working on his video series “The Thundering Third” for which he won an Emmy and the Edward R. Murrow award.

Throughout his time covering conflicts in the Middle East, McCarthy said he felt a “nagging emotional hollowness” as he could not follow-up with his sources once he left the country, and often had to omit certain “risky” quotes from his articles to protect them.