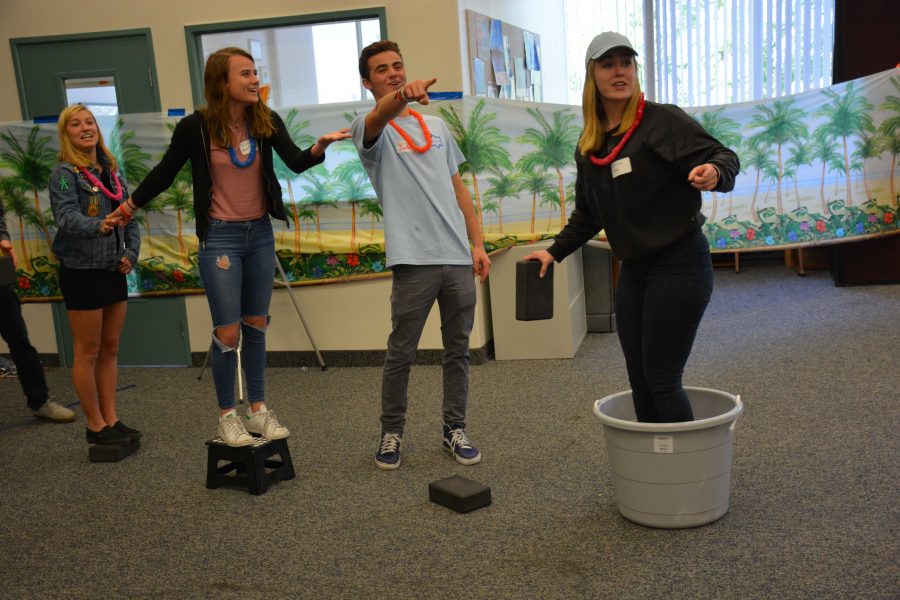 Rasa Barzdukas '17, Jean Sanders '17 and Lola Clark '17 attempt to cross to the other side of Chalmers Lounge without touching the floor during the activity "Escape from Paradise." Josh Musicant '17, a student enrolled in the Unconventional Leadership class, runs the activity, making sure attendees follow the rules. Credit: Teresa Suh/Chronicle

Students from the greater Los Angeles area took part in team-building group exercises March 12 at the third annual “Unconvention,” a student-led leadership conference at the Upper School where the co-founder of Riot Games, a gaming company that created the PC game League of Legends, Brandon Beck ’00 shared his experiences in forming his company.

Beck spoke about the importance of creating a “company culture.”

“[At Riot Games] we wanted people who love gaming and understand it and know the people who game,” Beck said. “They need to have empathy for players, and have to be gamers who have a deep passion for it.”

He also spoke about what makes a company run smoothly.

“Efficiency and creativity are both very important, and I don’t think that they’re mutually exclusive,” Beck said. “Creativity can lead to the most efficient way of solving a problem, actually.”

At the event, Students from Harvard-Westlake, Archer, Marymount, Marlborough and Palisades Charter attended a series of workshops and participated in team-building exercises. Harvard-Westlake students enrolled in the Unconventional Leadership course taught the workshops.

Some attendees said they enjoyed the exercise, “Escape from Paradise,” where students had to work together in groups to get from one side of a room to the other without touching the floor using a few selected objects to step on.

“The paradise activity was definitely my favorite part because it was really fun and really engaging, and we all really had to use leadership skills for sure,” attendee Marley Fair ’17 said.

The student and faculty organizers of the event said that they thought it was successful.

“For me, as a teacher, the ultimate goal is to teach the material to the students and get them to be able to understand the material, own the material so that they can facilitate a conversation about it with other kids,” Director of Student Affairs and teacher of the Unconventional Leadership course Jordan Church said. “I’m like a proud papa. Seems like all of the participants had a great time.”

Student organizers and Church invited Harvard-Westlake sophomores, juniors and seniors to the Unconvention and contacted other schools to invite students who would benefit from the workshops and activities.