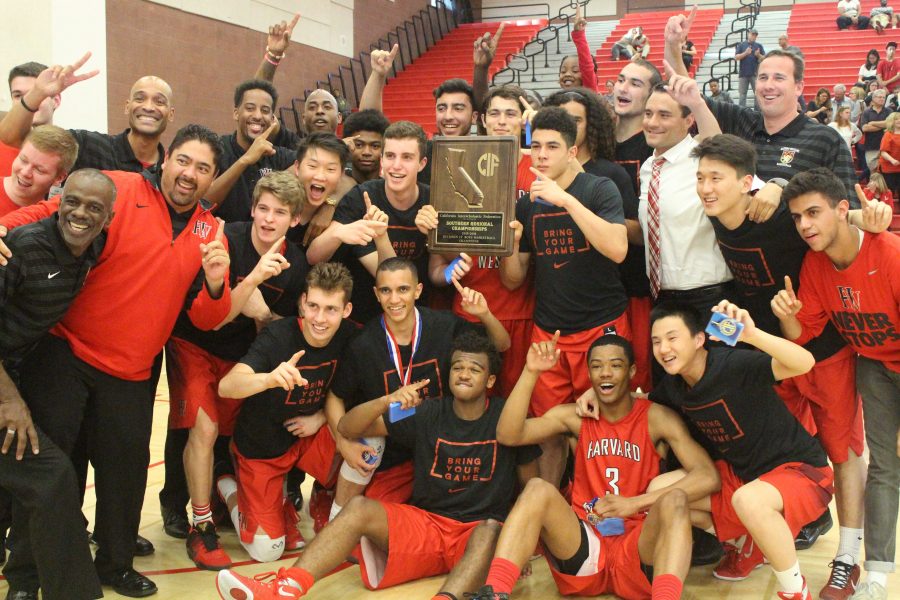 The Wolverines defeated the Viewpoint Patriots 52-39 in the Regional Finals, advancing to the State Finals at Sleep Train Arena in Sacramento.

In Cassius Stanley’s ’19 return from a concussion, he showed why he is considered by many one of the top freshmen in the country.

In a slow first quarter, the Wolverines scored just six points, four of which were courtesy of Stanley. The Patriots, who won the CIF-SS Division 4A championship, led 9-6 at the end of the first period as both teams had trouble finding a rhythm early.

Then, Viewpoint went on a 9-3 run, which extended their lead to 18-9 midway through the second quarter.

However, the Wolverines who have routinely come back from deficits were not about to roll over on the biggest stage yet. They went on an 8-0 run of their own, which included four points from Ray Mueller ’17 to cut Viewpoint’s lead to 18-17 at the half.

At halftime, Stanley led the Wolverines with nine points and Harvard signee Christian Juzang ’16 led the Patriots with eight points.

The Wolverines took their first lead of the contest with six minutes remaining in the third quarter on a Mueller layup, but Viewpoint, who were seeded fourth in the Division IV State Bracket were not finished by any means.

A minute later, with the score knotted at 22, Stanley hit the Wolverines’ only three pointer of the afternoon to give the Wolverines a 25-22 lead.

With 3:17 remaining in the third quarter Viewpoint’s starting point guard and captain Sayo Denloye ’16 got tangled up with Wolfgang Novogratz ’16 and fell on his left arm. He was helped off the court and into an ambulance and did not return to the game. The initial diagnosis from the Harvard-Westlake medical staff was a dislocated shoulder.

The Wolverines ended the third quarter with a 29-26 lead, and as the intensity grew within the gym which seats over 2,000 people, Stanley and Juzang both continually stepped up, fighting to give their team a spot in the state title game next weekend.

With six minutes in the game, Juzang tied the score once again at 30. On Harvard-Westlake’s next posession, Stanley was fouled and converted the floater, however he was unable to make the free throw. Juzang would not let the freshman upstage him as he was promptly fouled and made both free throws, tying the game at 32 with 5:14 remaining.

After Novogratz was fouled, Stanley hit a Kobe-esque turnaround jumper to give the Wolverines a 36-32 advantage with 3:30 left.

Both teams battled back-and-forth, however no one was able to score until Novogratz was fouled on a make by Juzang with two minutes in the game. Although Novogratz was unable to drain the free throw, the Wolverines led 38-32. The foul signified Juzang’s fourth, forcing him to play much more conservatively over the final 120 seconds of the Regional Championship.

Stanley then made four consecutive foul shots to ice the game and put the Wolverines in a favorable position with a 42-33 lead and just over a minute left.

Mueller was then fouled and made a free throw, giving the Wolverines their first double-digit lead. But Aram Arslanian ’16 was not yet finished with his high school career, making a contested three-pointer to cut the Wolverine’s lead to 46-36 with 50 seconds remaining.

The Wolverines then made nine of ten free throw attempts, including four makes from both Ali Iken ’16 and Novogratz to send Harvard-Westlake to the state championship.

“Our program has developed a culture and an identity, and we have showed that on any given night we are going to compete with anybody, and play as hard as we can,” Head Coach David Rebibio said. “Our team is able to come together and find a way to win.”

Stanley came up clutch for the Wolverines with 22 points and nine rebounds, Novogratz had 11 points and Mueller scored nine points and came down with eight rebounds.

Despite losing to Notre Dame in the CIF-SS Division 4AA semifinals, the Wolverines rallied with an at-large state playoff bid and have won four consecutive games to earn a spot in the State Finals at Sleep Train Arena in Sacramento.

The Wolverines will face Palma, who defeated West Campus 58-56 in the Northern California Regional Final.