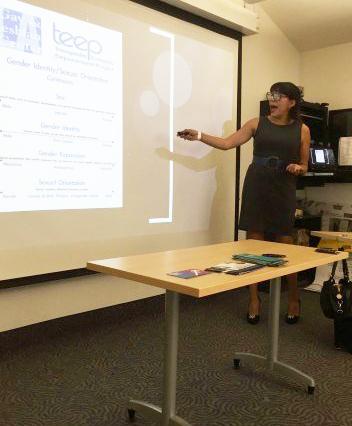 Diana Juarez speaks to the Gender Studies class about her work as an advocate for the LGBTQ community. Credit: Maddy Daum/Chronicle

Juarez advocates to set transition guidelines in workspaces for transgender people to create a safe and inclusive environment.

Juarez discussed many misunderstood aspects of society’s constructed idea of what it means to be a boy or girl. Heteronormativity, the belief that there is should be an alignment of biological sex and gender identity, leaves many LGBTQ+ community members feeling like they are in a gray area, Juarez said.

“I thought that I would be just like my mother and be able to wear make-up and have long hair,” Juarez said. “At the age of about four or five I started expressing this sense of myself to the world. I played with barbie dolls and wanted to wear heels. I was expressing that I am a girl, this is how I feel, and the world started telling me, no boys don’t do that, that is not appropriate for you, you shouldn’t play with that. I grew up feeling like I didn’t belong, and wouldn’t for a very long time.”

The Gender Studies class has been focusing on the transgender point of view and exploring the history of the heterosexualizing of our culture.

“We grow up believing male and female are the only normal relationships and that feminine and masculine identities are the only normal identities,” Juarez said. “So once we see things that don’t align with those concepts we believe that is abnormal and different. It really sets up the idea that heterosexism is normal and everything else isn’t.”

According to Juarez, trans people experience great challenges as they are transitioning, including homelessness and poverty. Often times levels of transition cause others to be skeptical of whether or not a transgender person can “pass” as a female or male, leading to violence and hate.

“I think this school talks a lot about the LGB part of that community but we never really hear about the trans community and I think that’s an issue that needs to be dealt with,” Gender studies student Naomi Barlava ’17 said. “As the trans community grows, because of growing acceptance towards them, people need to become aware of the obstacles they go through like any other minority group.”

Juarez encouraged students to not make assumptions about orientation or gender based off of outer appearance, use gender neutral language and educate others about the LGBTQ+ community.

“I believe the future is fluid,” Juarez said. “I believe it will be about doing away with pronouns and gender cues like guys wear flats and girls wear heels. I think that is going to be blown out of the water and be about accepting each other for who we are regardless of what language in which we use to describe ourselves.”