Mack is back: Eddie Mack ’17 carries on his family legacy 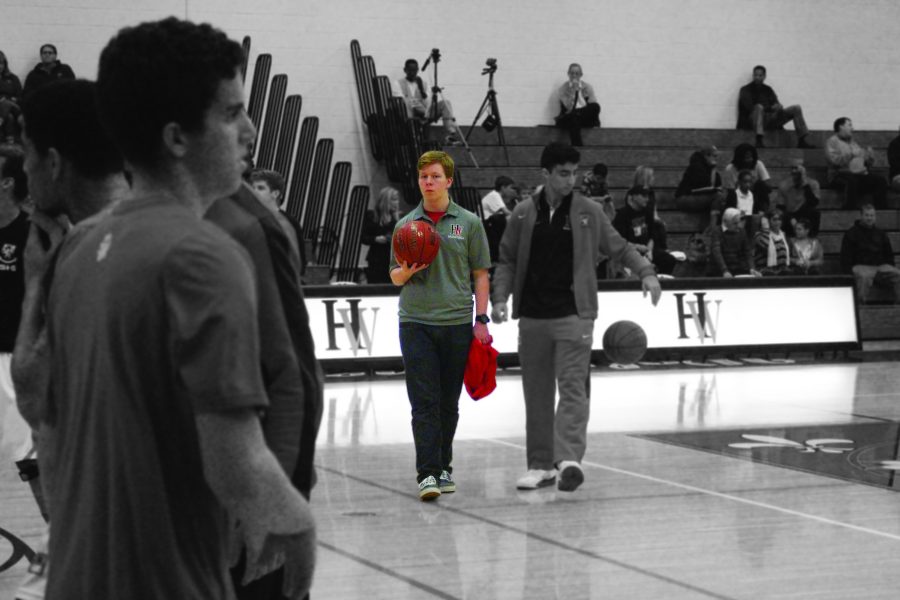 He’s at the top of the key, in a grey Nike Wolverines coach’s polo, black jeans and grey Nike sneakers. He slouches and crosses his arms, watching the boys’ basketball team warm up, giving them high fives and talking to an assistant coach; he’s the definition of nondescript.

Eventually, he wanders over to assistant coach Osiris Nalls.

“When do you want me to bring out the water?” Mack asks.

Mack is the Wolverines’ team manager. So were his two brothers, Jimmy ’08 and Robbie, and so was his father, Curtis. When he signed up last year, he was just carrying on the family legacy. There was never really a question if he’d manage the basketball team; it was just a matter of when.

Now, he’s focused on doing his job. He shuttles water from the bright orange Gatorade tank to players, often getting to them before they reach the bench after subbing out of the game.

A player checks out of the game and takes a seat. Halfway across the bench, water in hand, Mack comes to a stop. He’s ducking. Three fans are in the first row of the bleachers, right behind Eddie.

They start laughing. “Go ahead,” they say.

Mack sprints through. On the way back, he dips again in front of the three, waiting for the play to end before blocking their view.

“Go ahead,” they say again.

But Mack stays put until the ball rolls out of bounds at the opposite end of the court.

“I don’t want you to notice me,” he tells them, and then rushes back to his seat at the end of the bench, out of the way.

On the way back, Henry Vogel ’16 turns around and looks at Eddie. Vogel opens his mouth.

“Towel,” Mack says, already on his way to get it.

This is rare day for Eddie. Often, instead of helping on the bench, he sits above the action in the last row of the bleachers. He films the games there for coaches and players to dissect later. That’s where he’s been as Cassius Stanley ’19 has alley ooped and reversed his way onto SportsCenter, catching it all on video. It’s mundane, and it’s lonely sometimes, which about sums up being manager as well as anything.

But that tedium doesn’t make Mack care any less or work any less hard. He mans the clock in practice, lugs equipment bags to and from the team buses and sometimes keeps stats. At a tournament in Palm Springs, Coach Nalls called for Mack and fellow manager Daniel Eghbal ’16. He told them they were going to have a little competition, and after the tournament, he would crown one of them “Number One Manager”. The rest of the weekend, the two raced to grab equipment and to bring gear before it was even requested. On the way home, they asked who won. “You know what?” Nalls told them. “You’re both good.”

The tie stung for Mack at first, like all ties do. “But hey, at least we’re both not bad,” he says now.

Mack jokes around with the players just as much as he does with the coaches. Yet he doesn’t belong to either. He’s like a warped puzzle piece, never fully finding his place.

“Not quite a player. Not quite a coach,” he explains. “Somewhere in the middle.”

At a practice during the off-season, a player hollered at Eddie. He wanted Mack to grab rebounds. Right after Mack started, a coach called. He wanted Mack to run the clock. Mack headed to the clock, but not before shagging one more ball. It’s a classic scenario for the manager, caught between two competing views of himself.

Mack is back at the top of the bleachers with his camcorder one March Saturday. It’s the California Division IV Semifinals, where a win will send the team to the State Championships. It’s a low scoring game at first, neither Viewpoint nor the Wolverines able to hit their shots. By the second half, they are falling and by the late fourth quarter, the Wolverines take control. Mack watches it all from above, silently following the play with the camera. He doesn’t say a word as the game slips into its final minute, and he doesn’t say a word as the clock hit zero: HARVARD-WESTLAKE 52, VIEWPOINT 39.

He doesn’t say a word as he rushes down the aisle with the tripod, collapsing it as he goes. Everything comes out when he reaches the court and the Wolverine bench. “LET’S GO!” he screams, and if he isn’t high fiving a player, he’s hugging them.

Mack is one of the last people off the court when the celebration moves into the locker room. He trails head coach David Rebibo, and when they enter, all of the players dump cups of water on their coach, an impromptu Gatorade bath. Mack gets doused as well, and everybody rushes the coach and the manager, jumping up and down with excitement.