The Harvard-Westlake Chronicle • May 18, 2016 • https://hwchronicle.com/42661/news/school-honors-departing-faculty-team-senior-class/ 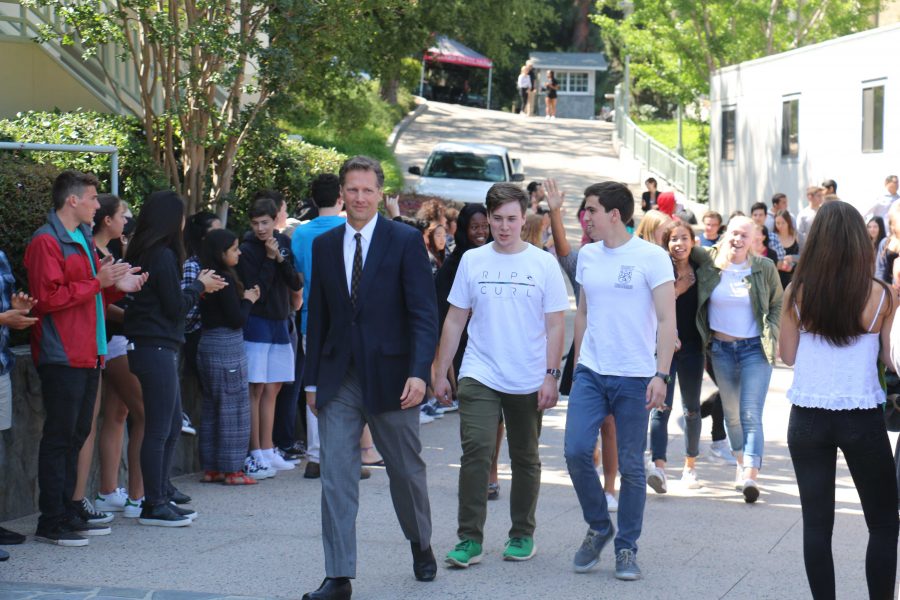 Head of Upper School Audrius Barzdukas, William Ruppenthal '16 and Jake Zimmerman '16 exit Taper Gym after their last First and Third Wednesday Assembly. The seniors and Barzdukas walk between sophomores and juniors for the end of the year "senior walk." Credit: Pavan Tauh/Chronicle

The Chamber Singers celebrated performing arts teacher Rodger Guerrero’s departure from the school after 15 years. Guerrero conducted the singers in a rendition of their favorite song, “Have You Seen the White Lily Grow.”

“We are so, so lucky to have been able to sing with you. Thank you for everything you do,” Elizabeth Edel ’16 said.

Members of the sophomore and junior classes gathered outside Taper Gym to cheer for members of the graduating senior class as they left the assembly. Krispy Kreme donuts were available for all students in the quad. Third period classes were delayed.

Science teachers Yanni Vourgourakis, John Feulner, and Jesse Reiner from the AP Physics Band opened the assembly with a guitar performance. Reiner also played a harmonica solo and sang a parody of “Stormy Monday” by B. B. King that featured science concepts.

Kat Edminston ’17 and Allison Gorokhovsky ’17 from Community and Character Committee reviewed this year’s Festival of Spring and announced the faculty as the winner of the various competitions at the event.

Members of the robotics team, also known as the Wafflebots, encouraged students to join the team next school year. They also announced that they advanced to the quarter finals at the Los Angeles Regional Tournament held earlier in March.

Students enjoyed donuts on the quad after the assembly.