The Harvard-Westlake Chronicle • May 21, 2016 • https://hwchronicle.com/42706/homepage-news/amato-to-depart-for-john-thomas-dye-school-after-38-years/ 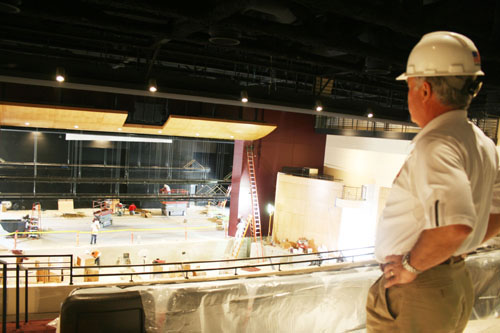 Vice President of School John Amato looks over the construction of Bing Auditorium in 2008. Amato has been an integral part of the middle school modernization project and the plans for a new parking garage. Credit: Chronicle Archives

Vice President of School John Amato will leave Harvard-Westlake to take a new post as the Interim Head of John Thomas Dye School, JTD Board of Trustees President J. David Tracy announced Friday in an email to alumni.

John Thomas Dye is a private elementary school in Los Angeles, which sent the most seventh graders to Harvard-Westlake for this school year, according to admissions data.

He is temporarily replacing Head of JTD Andrea Archer, and after his interim, Amato will return to Harvard-Westlake.

“It’s a great choice for them, because no one draws people together better and with more heart than John Amato,” President Rick Commons said.

Amato first came to Harvard School in 1978 and was later named the Head of Lower School. After the merger in 1991, he assumed the position of Assistant Headmaster before his current position as Vice-President.

During his 38 tenure at the school, Amato has seen three administrative eras from Harvard School Headmaster Christopher Berrisford to Thomas Hudnut to current President Rick Commons. Just after the merger, Amato began the 15-year planning process for the middle school modernization project, which resulted in the new middle school campus in 2008. He has also been an integral part of the plans for the new parking garage at the Upper School.

Amato currently teaches a seventh grade history class and coaches middle school boy’s soccer, but in the past he has also worked in admissions, developed curriculum and welcomed students and parents as they arrived at school during morning carpools.

“After 18 years of starting my days the same way, it is hard to imagine coming to work and not being greeted by Mr. Amato, who stands on the front curb and waves to arriving students and faculty every morning,” Head of Middle School Jon Wimbish said. “His warm, inviting, fun-loving presence will be missed. Ultimately, he’ll be back to HW, and that gives me reassurance.”

Those at JTD are confident he will be a positive influence on the school.

“Known, admired and loved by hundreds of JTD alumni and their families, John Amato has the personal touch, the professional gravitas, experience and local knowledge that will serve our school well in the year ahead,” Tracy said in the email. “Those who know him will speak of his warm nature, his welcoming attitude, his devotion to children, his support of teachers and his perpetual good cheer. I cannot imagine a better person to welcome to JTD this summer.”

Amato and his wife will move from their home in Pasadena to one of JTD’s homes near the school so he can be closer to the community.

“John’s willingness to join the JTD family to help us through this period of transition is an extraordinary gift,” Tracy said in the email. “It is a testament to the special standing that JTD continues to enjoy in this community. I should also make a special acknowledgement to Harvard-Westlake for their extraordinary generosity in supporting us here. We are deeply grateful.”

Students said they will miss Amato’s presence at Harvard-Westlake.

“He really makes an effort to get to know his students, and it is evident that he cares about each and every person he teaches,” said Alexa Nourafchon ’17, who had Amato for seventh grade history. “He always found a way to incorporate fun into his lessons while still providing us with a great education of different countries and their issues. Because of his light-hearted learning environment, my classmates and I were always eager to go to his class.”