The Harvard-Westlake Chronicle • May 27, 2016 • https://hwchronicle.com/42789/ae/students-present-digital-stories-in-showcase/ 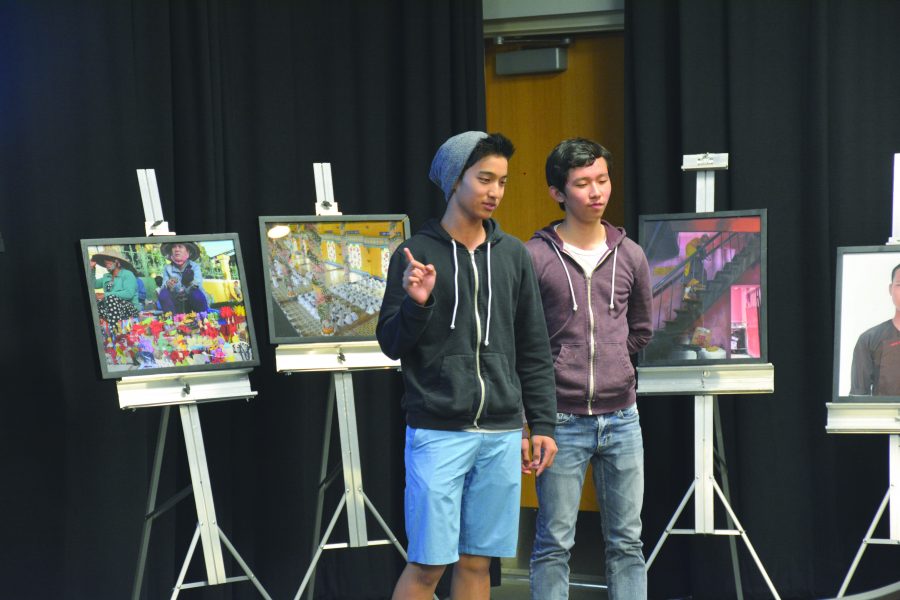 BACK IN ‘NAM: Justyn Chang ’18 and Christopher Park ’18 give a brief introduction to their film, “The American War.” Chang and Park were two of 16 students who traveled to Vietnam during semester break in January as part of a Digital Storytelling Adventure. Credit: Danielle Spitz/Chronicle

Students from the HW Go! Vietnam trip displayed their final film and photography projects in Ahmanson Lecture Hall on May 18.

Each student selected an aspect of Vietnamese culture or history to study and on which to create a project during the trip.

The students presented their documentary and photography projects for the first time at the showcase, sharing what they learned during the digital storytelling trip.
The showcase included 10 photographic pieces and nine student films.

The photographs captured many aspects of Vietnam, such as people in uniforms, a monk in his temple and a knotted mass of wires on a telephone pole. The documentaries focused on various topics such as food, propaganda, religion, female soldiers and the legacy of the Vietnam War.

Kinly McCaffrey ’18 presented her documentary about her mother’s escape from Vietnam during the war. McCaffrey’s film included an interview with her mother, video clips from the trip and actual footage from the war.

“I wanted to tell the story from the South Vietnamese side because the North Vietnamese story is the only one ever spoken of,” McCaffrey said. “So not only did I want to tell my mom’s [difficult] journey, I also wanted to inform all who watch it what life is and was outside of our bubble of California.”

Students from the trip have been working on their projects since their return.
Gaulke held weekend workshops and editing sessions after the trip, as well as workshops prior to the trip to teach Vietnam’s historical context and digital storytelling skills.

“I am very proud of all the students who made time in their busy schedule to do these meaningful projects,” Gaulke said. “Being a tourist can be a shallow experience, but these students made theirs a deep one by working to transform it into a product that they can share with the world. I look forward to entering these films into film festivals, and I imagine they will find the success in those festivals that our other films have had since 2013.”