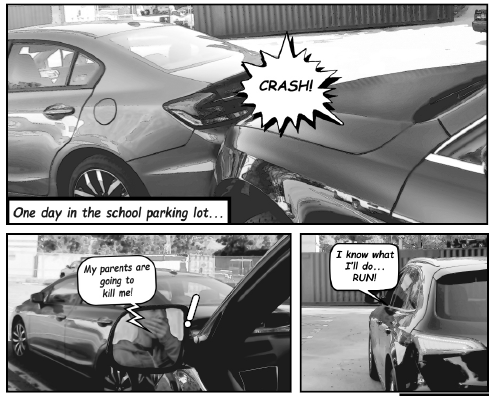 When Naomi Barlava ’17 walked out of her eighth period class to her usual parking spot in the junior lot, she found a large crack in her rear bumper.

“I knew I hadn’t gotten in a car accident,” Barlava said. “The only explanation was that someone had hit my car in the parking lot without telling me.”

Since no one took responsibility for the accident, Barlava was forced to pay for the damage with her parents’ insurance, causing their monthly deductibles to increase significantly.

Barlava is not the only student to be affected by an accident in the lot.

The school’s current system for investigating accidents that take place in the lot involves treating the accident as if it occurred outside of school. However, students are encouraged to report accidents if they are caused by another student.

“Our lot is small, and the spots are difficult at times to navigate,” Head of Security Jim Crawford said. “Students who acknowledged their inexperience to me at the beginning of the year, I tried to accommodate in more easily accessible spots. The parking situation will change in the future, and in the meantime I would suggest that inexperienced drivers should practice [parking] outside of school.”

Crawford also said that the school is considering adding security cameras because people not affiliated with the school use the parking lot and could be responsible for some accidents.

Some think the school should take immediate action to ensure that those who cause damage to cars are caught and held financially responsible.

“I know that the school isn’t held responsible for anything that happens in the parking lot, but I do think there should be security cameras or something so that people are held more responsible for their actions when driving,” Barlava said.

Other students believe that as long as others are honest and come forward for any accidents they cause, the school doesn’t need to take any more steps to investigate accidents.

When another student hit her car, Alivia Platt ’16 was immediately informed via e-mail by the person responsible, who is paying for the damage.

“I was hit once before, and the school’s current system of checking the cars around mine for damage that indicated that they had hit me worked, and the person who hit me was held responsible,” Platt said. “I think that if the school trusts students to come forward for accidents they cause, students will step up and be honorable. In life, you’re not always going to get caught for the bad things you do, but that doesn’t mean you shouldn’t take responsibility for them. This is just practice for the real world.”

Currently, the school assumes that students will admit fault in an accident.

“If an accident does occur and the owner can not be found, students should leave a note with what occurred and contact information or contact a security guard and give their information and space number to them,” Crawford said.

Others think that it’s simply not in the nature of a high school student to come forward in admitting something they’ve done wrong, especially when they know there could be financial consequences.

“I don’t think that there’s any motivation other than common decency for a person to come forward if they’re responsible for hitting a parked car,” Lauren Genender ’17 said. “Students are afraid of the possible consequences from both their parents and school and may just want to drive away and try to forget it happened.”

Platt and Barlava are not the only students to be affected by accidents in the school parking lot.

Many of the accidents caused in the lot are due to the lack of space for parking and maneuvering, which the school is planning to solve with additional parking in the parking structure it hopes to build.

“I think that the person who did this to my car is disrespectful in not taking responsibility for their actions, especially since they had to have noticed that they hit my car,” Barlava said. “Although it may be embarrassing or hard to come forward and admit that they hit me, it’s the right thing to do to leave a note and pay for an accident they caused. How would they feel if someone did this to them?”