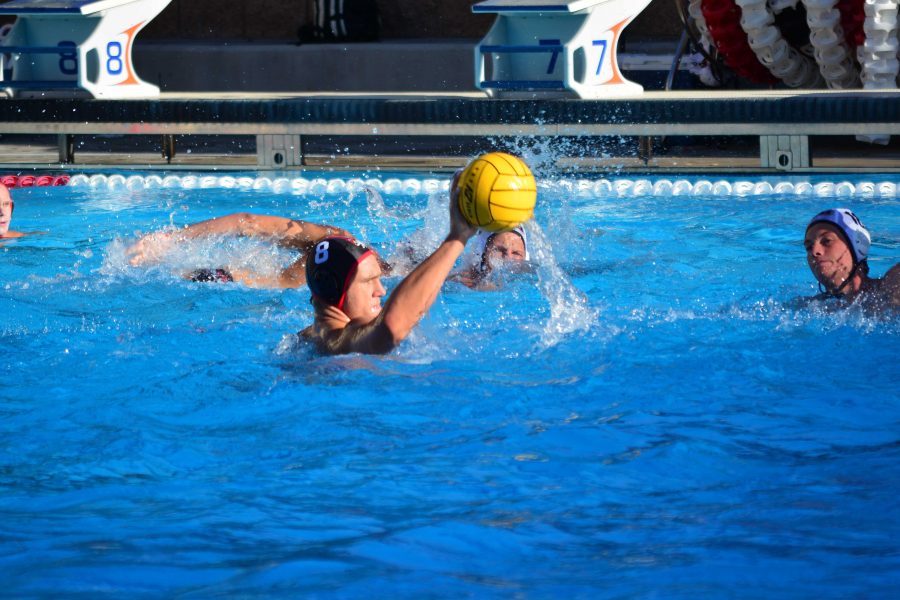 The 2016 boys’ water polo squad is missing some conspicuous figures from the previous year—influential seniors whose departures must be compensated for. The task is not a new one for Head of Aquatics Brian Flacks ’06.

“I think that every year every team comes with that kind of challenge, of finding the new us and what our identity is going to be,” Flacks said. “We’re going to have a different style and our approach as a coaching staff is we hope to adapt to the players that we have. We’re not gonna stick with the same thing that worked last year.”

However, Flacks is well aware that this year presents what is perhaps the most pressing dilemma yet in terms of replacing college-bound stars, now that the Wolverine career of Ben Hallock ‘16 has drawn to a close.

“Ben Hallock was by far and away the best player in the United States last year,” Flacks said. “He was an Olympian as a high school player and may go down as one of the top high school players of all time. It was very obvious, in terms of anyone can basically figure what we were trying to do. I mean, when you have a player of that caliber, you want to get that player the ball.”

After a graduation that sent off not just Hallock, but Duncan Froomer ‘16, Davis Wachtell ‘16 and Sean Jung ‘16, this year’s team is taking a different shape.

“This year we’re much different,” Flacks said. “We don’t have a superstar, I think we have a bunch of very very very talented players. I think we have a much more solid group in terms of overall depth. You’ll see a lot more scorers, I don’t think we could even guess right now who the top goal scorer will be next year. Last year it was easy, it was Ben. Everyone knew going into the season he was going to be our best player and that’s much different this year. So I think that every game you’re going to see a different best player.”

Two of those players, Luke Henriksson ‘17 and Felix Brozyna-Vilim ‘17, were talented enough to garner scholarship offers from UCLA. The pair committed to play for the two-time defending NCAA champions last spring.

Brozyna-Vilim’s talent also earned him one of 13 spots on the USA Water Polo Men’s Youth National Team’s FINA Youth World Championship Roster. Alongside him on that list is Sam Krutonog ‘18. The two are currently in Podgorica, Montenegro, where they will compete to be crowned the best 18 & under men’s national teams in the world.

“I think it’s an honor for them just to be selected to [the team],” Flacks said. “I think it’s a testament to the hard work they’ve put in for a long long time, mixed with just the natural talent they have.”

Brozyna-Vilim not only sees his inclusion in the roster as an honor, but also an opportunity.

Brozyna-Vilim is not alone in this sentiment, as Flacks is also hoping the experience will help once he and Krutonog return stateside.

“For both of them I hope that it just brings a level of competitiveness that they can’t get just playing high school in the United States,” Flacks said. “I think when you have the opportunity not just to play against them, but to play with the best players in the United States, it can really bolster their water polo IQ, their ability, and also their confidence.”

“One of the most improved players that I’ve seen is Sam Krutonog,” Flacks said. “In terms of the national level, I think he’s one of, if not the most, elite goalie in high school at this point.”

Krutonog’s spot in the starting lineup may be cemented, but two other spots are open, and several underclassmen are in the mix.

“I think it’ll be very interesting to see who rounds out our 5th and 6th players in our lineup,” Flacks said. “At this point, I don’t think we’ve picked them yet.”

There’s one more new aspect that Flacks is trying to introduce to the program this year. After five seasons at the helm of the boys’ water polo program, he hopes to stray from the Wolverines’ default mindset, a mindset which has traditionally revolved around championships.

“We want to be the best us that we can be,” Flacks said. “We do believe that being the best us that we can be that we can win a championship, but we kind of want to get away from the mindframe of winning and losing being our goal. We should never define our success by our wins and losses. We’ve won a lot of games, but that’s never going to be what defines us. I think that the only way for us to define ourselves is by becoming what we feel like is our best ‘us’, which is a tough thing to define, and I think that as a coaching staff we’ve really laid out to the players where we feel like we can and should be and we’re working to get there.”