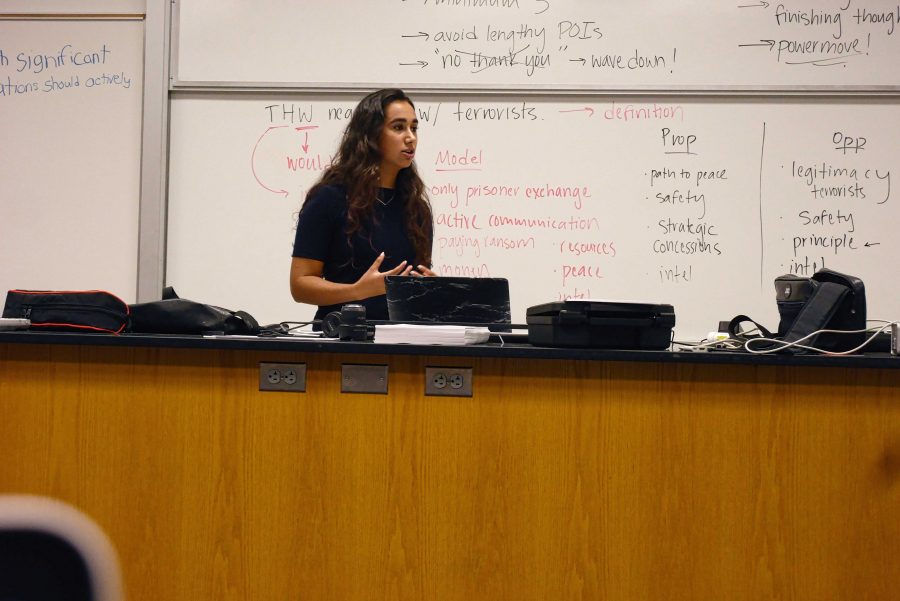 Octavia Tyagi '19 delivers a speech during a practice World Schools debate before her classmates. Printed with permission of Mike Bietz.

The upper school campus hosted the second annual debate.LA summer camp from June 20 to July 29. The program is an intensive speech and debate workshop meant to help hone debaters’ skills before the competitive season.

Students of all skill levels in grades five-12 were eligible to attend, and the camp had 333 attendees from 127 different schools in 10 countries.

“Having alumni return is always great,” Bietz said. “About 20 percent of our attendees are HW students. It gives them the ability to learn from successful recent graduates.”

“Summer camp provides an opportunity for kids to learn debate in an intensive atmosphere,” Bietz said. “Trying to learn debate at a weekly practice during the school year really sets you behind.”

The two-week flagship program, which offered a broader set of courses than the beginner program, ran July 11-23. A one-week extension camp was available after.

Participants had the opportunity to stay in the University of California, Los Angeles dorms for the duration of the program.

Campers staying at UCLA were able to participate in a variety of activities, including day-trips to Westwood and the Santa Monica Pier.

“Staying at UCLA made my experience even better,” program participant Lauren Morganbesser ’19 said. “It was great staying over because the coaches who taught at the camp were available at night to talk about cases, do drills and answer any questions.”