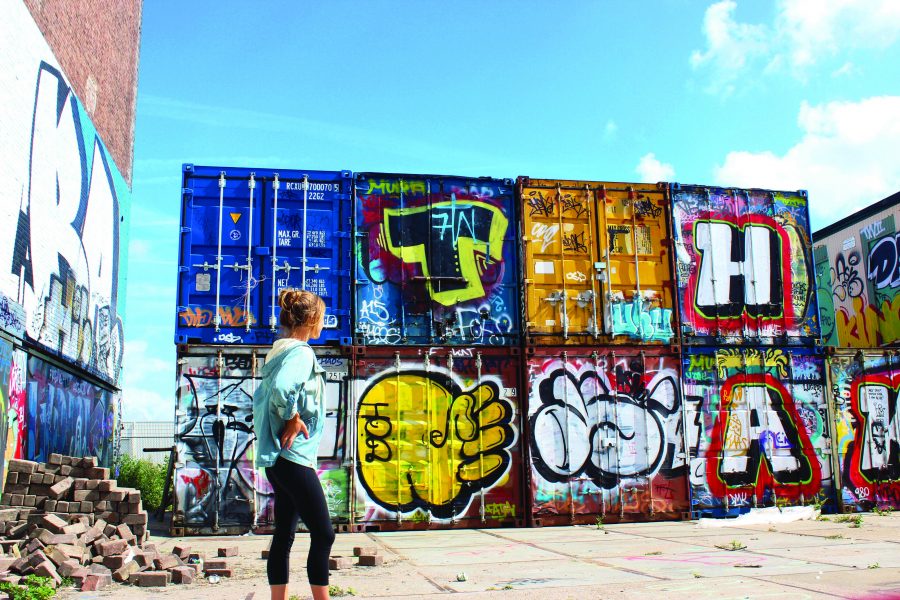 Printed with permission of Sahale Greenwood.

Walking through a five-story designer clothing store in Tokyo, Max Robertson ‘17 said he was surprised to find some of the clothes in glass cases, as if the shop were a museum. The clothes were mixed in with other pieces of art on display, an homage to how significant a role fashion plays in Japanese culture.

Robertson explored various fashion districts in downtown Tokyo this summer, specifically observing the differences in street fashion in comparison to that of downtown Los Angeles, on a grant under the Asia Initiative Student Summer Fellowship.

This trip, which ran from June 30 to July 12, was Robertson’s first time out of the United States. He said that he chose Japan because he has always been interested in the artistic, highly detail-oriented culture. He said that he has also always been interested in fashion and aspires one day to possibly open his own line. He also sketches out original designs in his free time.

While many people accept Paris and Milan to be the main fashion capitals of the world, Robertson described Tokyo as a third “fashion powerhouse.”

“I don’t think people [in the United States] realize how much they are influenced by Japan, especially big Japanese designers,” Robertson said, referring to famous Japanese clothing companies such as Acne Studios, Comme des Garçons and Harajuku.

For example, Robertson said, recent trends of dark-colored, oversized baggy pants and the style of half-sportswear, half-casual wear originated in Tokyo but have gained popularity in the United States.

He said visited many designer stores as well as hole-in-the-wall places, interviewing employees and people on the street about the topic.

He documented his trip through photography and videos and plans to present all of his findings in a gallery in Feldman Horn opening later this fall.

Recipient of the Junior Summer Fellowship Sahale Greenwood ’17 stood on in the entrance of a harbor in Amsterdam, scanning the water and reading the words of a sign above her head “A Place Beyond Belief.”

“The island was brimming with street art, beautiful cafes and big warehouse studio spaces, yet it was far enough off the beaten path that there were no tourists there,” Greenwood said.

Greenwood aimed to examine and learn about the various forms of street art not only near her Los Angeles home, but also in European cities where the art form has become increasingly popular.

Greenwood spent a few days in the Los Angeles Art District before traveling to the Netherlands to begin her research abroad.

She focused primarily on the artists and the legality of the art.

Specifically, Greenwood wanted to know why artists wanted to publicize their messages and how local authorities responded to what they created.

By contrast, she observed that European street art was more vibrant in color and centered around cartoonish characters.

While she took guided tours of Amsterdam, Rotterdam and The Hague to learn more about the arts from different regions, she said her favorite part of the trip was independent travel.

“I’ve made all of my best discoveries while wandering the city by myself,” Greenwood said. “So often people think all the greatest things have already been discovered so they stick to their tours.”

Overall, Greenwood says her fellowship inspired her to explore interests that she would not have otherwise had an opportunity to pursue.

“[The experience] gave me way more than just amazing photographs,” Greenwood said. “It gave me a new devotion to explore and not mind getting lost, or being uncertain of what I was walking into.”

Pouring the clay and water mixture into the mold, Rachel Lee ’17 emulates her ceramics instructor Jungwon Yoo as she finishes slip casting, a technique used to manufacture ceramics into specific shapes.

Lee traveled to Seoul, South Korea for 12 days under the Gunter-Gross fellowship to learn more about the way in which Korean culture affects its art.

“I thought it would be such a great opportunity to learn more about slip casting since I didn’t have much experience before,” Lee said.

During her stay, Lee also visited art galleries and museums.

While she mostly worked with ceramics, she also learned the history of traditional Korean folk paintings and art.

“My instructor and I went to this gallery called The Treasure of Kangon, and it had scenes of daily life in Korea,” Lee said. “That’s where I learned a lot about older painting styles.”

Ever since Lee was first introduced to ceramics at the middle school, she has continued to take classes in the subject at the Upper School.

During the summer, she wanted to learn different techniques and pursue her art, so she applied for the fellowship.

“At school we only really use the potter’s wheel, so I wanted to branch out and learn more traditional skills,” Lee said. “When I was in Korea, I was able to not only focus on the art itself but the details, like the brushstrokes, colors and the focus on nature in paintings.”

As Carmen Levine ’17 watched the Flamenco dancers perform in Seville, Spain, everything her dance teacher had taught her suddenly made sense.

“I saw the techniques and the rhythms I had learned being put into practice,” Levine said. “It completely changed my perspective on Flamenco.”

During the summer, Levine spent a week traveling in Barcelona and Seville, which is in Andalucia, the birthplace of Flamenco. Determined to study everything about the art of Flamenco dancing, she visited museums, watched numerous Flamenco performances and took classes on every aspect of Flamenco except for guitar playing.

As the daughter of a former Flamenco dancer, Levine grew up with songs and dances of both Spanish and Mexican styles. Although she has been a dancer since she was two years old and has studied various types of dance such as ballet and Bollywood, Levine had never danced the Flamenco.

“I felt like this was the perfect opportunity to fulfill the desire I had to learn more about an area of study I’m passionate about and interested in pursuing,” she said.

Initially, the purpose of her trip was to explore the effect Spanish colonization has had on the Mexican indigenous dance.

However, the concept later evolved into a cultural comparison of the Baile Zapadeado, a Mexican style of dance, and the Flamenco dance in Spain.

Levine said that during her time in Spain, she has learned not to take things at face value.

“On my first day, my [hand-clapping and rhythm] teacher handed me this giant chart of all the different types of Flamenco, and I remember being flabbergasted at the diversity that existed within this one genre of dance,” she said.

Through her studies, Levine realized that, despite being seen mostly as an entertainment form, Flamenco is a much more complex form of artistic expression.

“My teachers in Spain inspired me to keep dancing and practicing because you can study Flamenco all your life and still learn something new every day,” Levine said. “Flamenco is eternal, as one of my teachers said.”

Expecting to interview a young female student from Chiapas, Mexico, Alitzel Villanueva ’17 was instead greeted by a young mother and her one-year-old child.The high school-aged girl explained to Villanueva that her responsibilities now resided at home and her priority was her newborn, bringing her short-lived time as a student to an end.

After receiving the Latin America and Iberian Studies Fellowship, Villanueva spent approximately three weeks in Mexico interviewing this young mother and three other teenagers about their perspectives on gender roles and the presence of gender inequality in their country.

Villanueva plans to continue the work she did this summer by publishing her project in an academic journal.

Additionally, she hopes to start a nonprofit to aid young girls who cannot afford to attend school in Mexico.

Villanueva spoke to two Mexican girls from the state of Veracruz, and two of indigenous heritage from Quintana Roo, Villanueva said in an email. The girls she interviewed were 15 to 17-years-old.

“I have been inspired by the strength and ambition the girls have,” Villanueva said. “Most of the time it was hard for them to identify any gender inequality they had experienced.”

Villanueva also learned about another young woman’s whose schooling was cut short.

The woman’s family could no longer afford to send her to school and she was subsequently pulled out of 9th grade before her middle school graduation.

However, the interviewee still informed Villanueva of her plans to one day become a doctor.

Although her time in Mexico is over, Villanueva said she will not forget the girls she encountered.

“Every girl had a different take on life because each girl comes from a different environment,” Villanueva said. “They are all truly one of a kind and I hope to better their lives as much as they changed mine.”

Connor Reese ’17 walked through the walls of Seodaemun Prison where his great-grandfather, Chu Yohan, served as an inmate for five years in the 1930s.

Japanese occupiers held Korean captives in the prison when Korea was under Japanese rule.

“I was able to see first-hand the hardships and struggles he had gone through to help to gain back Korea for Koreans,” Reese said.

His daily schedule consisted of touring museums, visiting memorials and interviewing people such as an art museum curator, a magazine publisher, an author and two professors who studied his great-grandfather’s literary work in order to gain more insight on his family history.

Reese plans to create a video documenting his great-grandfather’s work and life based on his findings from the trip.

It started simply: slow strums of the guitar, the rhythmic chanting of spoken poetry in Spanish. Five dancers took the stage, dressed in flamboyant reds and greens. The stage shook as the dancers slammed their feet on the ground in intricate sequences. Sweat splashed the audience with every movement. The Flamenco dance had begun.

Among the audience was Alison Oh ’19, who travelled to Spain to study the Moorish influences on modern Spanish culture through her HW Go! Fellowship grant.

After learning that the Flamenco style of dance was influenced by Moors in Spain, Oh was inspired to watch a Spanish Flamenco dance.

“It was really hard to take your eyes away from the dancers and the singers, and the guitar players were obviously really passionate about what they were doing and what they were creating,” Oh said.

Her Spanish class inspired her to apply for the fellowship, she said, because she learned that many origins of Spanish words had been influenced by the Moors’ language, Arabic.

The influence of the Moors in Spain’s history fascinated her, and she wanted to discover more about their influence on modern Spanish culture.

To initially research the topic, she read the books “The Ornament of the World,” “A Vanished World” and “Moorish Spain.”

Oh visited Madrid, Toledo, Granada, Seville and Cordoba. She said some of her favorite parts of the trip were eating Moorish influenced Spanish food, such as Paella, and exploring Spanish architecture.

The monuments that she visited were historical Mosques built on the Iberian Peninsula during the time of Moorish inhabitation and modern architecture that was influenced by the Moors.

“On this trip I found it really interesting that next to modern architecture, you can see centuries old buildings,” Oh said. “The architectural styles would be completely different, but they would be next to each other.”

Students will be able to learn more about her trip later this year when she shares a video and powerpoint presentation with the school community.

She also wrote daily journal entries and is currently curating them into a travel vlog.