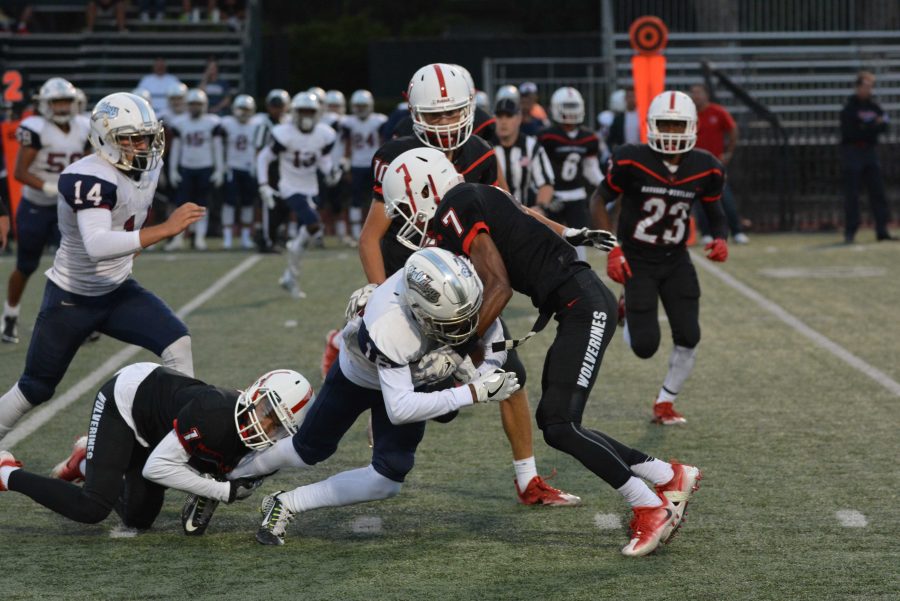 “We’ve been here before!” captain Cam Welther ‘17 shouted, trying to rally his team.  The Wolverines had yet to score in the second half, while their opponents, the Garfield Bulldogs, had just seized a 31-28 lead with 21 unanswered points.

“We’ve done this before!” Welther roared.

On the ensuing kickoff, the Wolverines offense took possession and marched downfield for a 30-yard field goal by Josh Lyons ’17.  In the end, though, the Wolverines were just a penalty flag away from having a chance to tie the game, as Garfield held on for a 38-31 victory.

The Wolverines started the night with a dominant first half, leading 28-10 entering halftime.  QB Jameson Wang ’20 threw for three touchdowns to Thomas Glover ‘18, Zac Harleston ’17 and Max Robertson ’17.  Wang, Mason Rodriguez ‘18 and Cam Jones ‘18 combined for another highlight-reel play, a 32-yard hook-and-ladder for a touchdown.

Wang completes a pass to Rodriguez… who pitches it back to Jones for a TD. Lyons nails the PAT; 28-10 HW. Q2 0:31 pic.twitter.com/zlj4XPl3qT

Garfield came out of the intermission by scoring a short rushing touchdown on their first possession.  The Bulldogs consistently made long gains with inside runs, a tactic which the Wolverines defense could not counter for most of the second half.   With 1:07 remaining in the third quarter, Garfield took the lead with another run, adding on their final touchdown of the night just over four minutes later.

Meanwhile, the Wolverines offense was held out of scoring range until late in the second half, when Lyons made his only field goal attempt of the night.  In his return from a quad injury, Lyons also made both of his point after tries, adding three touchbacks on kickoffs.

With just over a minute left in the game, it appeared that the offense would get one last attempt at a game-tying drive.  However, the Wolverines were flagged for roughing the kicker, granting Garfield an automatic first down that sealed the game.

“We’ll watch film tomorrow and we’ll fix what we need to, mistake wise, but I don’t have those answers right now,” Ruggles said about his team’s preparations for next week.  “Once I watch film, we’ll figure it out.”

The Wolverines will next play against El Camino Real on Sept. 16.