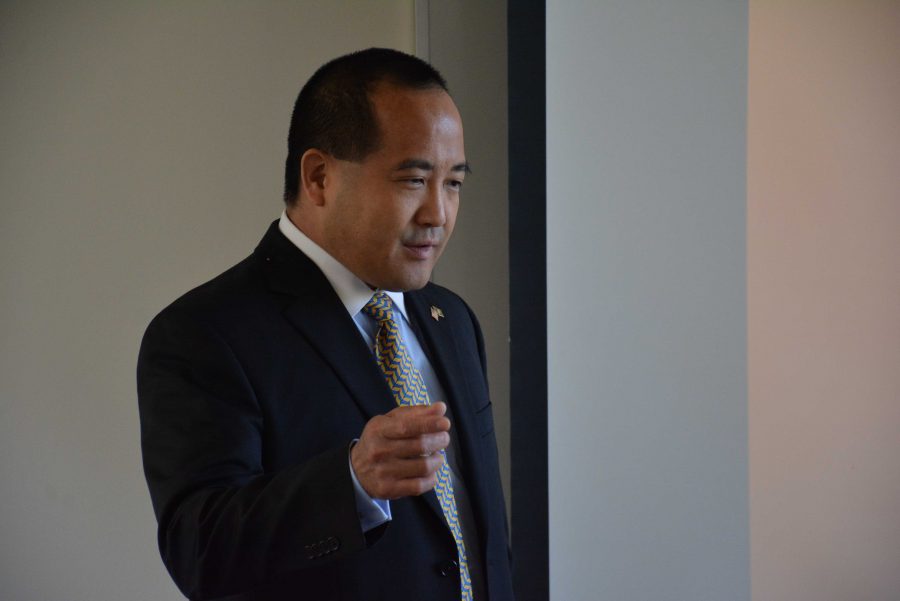 Los Angeles Deputy District Attorney Mark Inaba ’86 discussed the role of prosecutors at the DA’s office and shared stories about his gang-related cases with students in Criminal Law & Advocacy on Thursday.

Inaba’s presentation included photographs from a murder case he prosecuted and audio recordings of a gang member who felt threatened into remaining in his gang.

Inaba told students about the elements of the criminal justice system, as well as individual cases in his career. Other topics covered included gang crime, wrongful conviction and human trafficking. During his 17-year career as a prosecutor, Inaba has worked with the Hardcore Gang and Organized Crime divisions.

“There’s a lot more to learn than what you see in the headlines of the newspapers,” Criminal Law and Advocacy teacher Laurie Levenson (Dani ’17, Havi ’08, Solly ’06) said. “The really great thing about Harvard-Westlake students is that they’re smart and they want to get in-depth on in issue. So they’ve heard about gangs, they’ve seen them on television, but now they’re really getting the real story of what’s going on out there and how do we deal with it.”

Inaba attended Loyola Law School where Levenson was his professor. He also received a Bachelor’s degree in Mechanical Engineering from UCLA. Additionally, Inaba attained the rank of Lieutenant Colonel in the California Army National Guard where he served as a combat engineer and a lawyer for the Judge Advocate General’s Corps in Iraq, Kosovo and Germany.

“We learned a lot about what actually goes on in the world and some of the terrible things that actually happen,” said Aubrey Elwes ’18. “I feel like a lot of the younger generation doesn’t really understand how rough it can really be out there and there are indeed gangs.”