The Root of the Problem: Gender Imbalance in STEM Fields 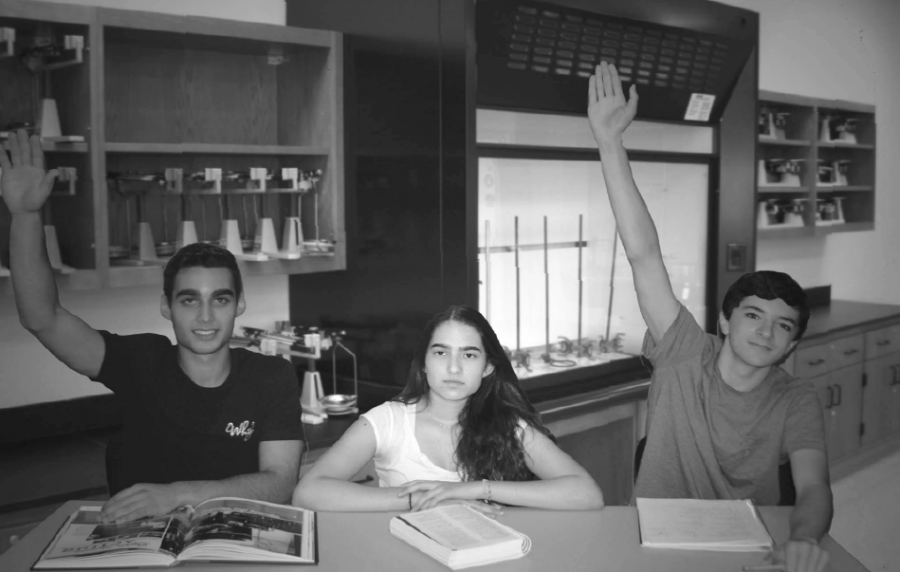 As Kat Edminston ’17 scanned her Advanced Placement Microeconomics and Macroeconomics class on the first day of school, she realized she was one of three girls in the class. A few weeks later, the other two girls dropped the course, and she was the only girl in the class of 16 students.

“It’s kind of weird,” Edminston said. “It’s not going to stop me from asking questions, but I feel like I stick out a lot in class.”

For Edmiston, this is nothing new. In her Advanced Placement Physics 2 class last year, there was one other girl. The other section had only four.

While Upper School Deans Department Head Beth Slattery said that even though there has been a slight increase in female representation in Harvard-Westlake STEM classes recently, a gender gap still persists in the highest level of mathematics and physical sciences.

“You might start off with parity in Chemistry Honors, for example,” Slattery said. “When they split off, it may seem that there are just as many girls who are then choosing AP Biology as are choosing AP Chemistry or AP Physics, whereas, historically, boys tend to go towards what are perceived as the more mathematical sciences.”

According to Girls Who Code, a nonprofit organization dedicated to decreasing the gender gap in technology, 74 percent of girls in middle school express interest in math and science, but less than 20 percent of AP Computer Science test takers are female. Statistics show girls often lose interest in STEM fields during middle school.

“When you visualize a scientist, you picture a guy,” AP Calculus BC 11 student Esther Ollivier ’18 said. “I feel like that’s why girls aren’t pushed, or don’t push themselves that much, to go into those fields. They don’t feel like they’re supposed to or that they can be good at STEM.”

The deans take gender ratios into account when determining classes before the start of school. Upper School Dean Celso Cardenas said they strive for a gender balance when possible, although this is easier for high enrollment classes and required courses. He said it can be difficult to reach an equal ratio for specialized classes.

“It’s something we’re cognizant of,” Cardenas said. “When you think about what one achieves by having a gender balance, it’s about the classroom experience and the ability to have a diversity of voices and ideas expressed.”

“It happens in society, and Harvard-Westlake is a microcosm of our society. I know it happens here,” Cardenas said. “I know there are moments when the male voice feels confident enough to dominate the conversation, and the female voice is kind of left in the background.”

“It’s the way we speak to girls,” Slattery said. “I find that, even at Harvard-Westlake, sometimes you’ll find parents who will [say to their daughters], ‘You don’t want to be too stressed out. You don’t have to take that class. It might be too hard.’ It feels like sometimes parents are trying to push boys to be more motivated, and with girls, they’re trying to ratchet down the stress.”

This may consequently lead to female issues of self-esteem, which can present itself during adolescence, Slattery said.

“Girls do tend to be harder on themselves, but what this can manifest into is girls not taking as hard classes because everyone is trying to bring down their stress. Boys are pushed in a different way,” she said.

Ollivier has observed similar patterns in the behavioral differences between boys and girls.

La Femme club Vice President and Design and Data Structures Honors student Daria Arzy ’18 attributes her interest in science to her parents allowing her to follow any interest she wanted from an early age, regardless of gender stereotypes.

“My parents instilled in me that I could do anything I set my heart to,” Arzy said. “I’m not sure if its made a huge difference, but, for me, it was the toys that I played with. I had trains. I was building stuff. I think that’s important for kids at a young age.”

Encouraging girls to pursue STEM from an early age is crucial to diminishing the gender disparity in those fields, Arzy said.

“It’s not possible to end this STEM gap from an age where girls have already established their interests,” Arzy said. “We need to start at a younger age and introduce them to these skills and these fields.”

According to Slattery, having female role models in STEM fields has been proven to maintain girls’ interest in math and science, despite cultural stigmas. Cardenas said that implementing a program between female faculty and students could be helpful in maintaining female interest in STEM.

“I think we have incredible female faculty in STEM, so having the opportunity for faculty to be mentors to young ladies would be really important,” Cardenas said. “As teachers find themselves in courses where the female population is a minority, they should ensure that the female voice is heard and really encourage that in all spaces.”

Ollivier said that the school seems to be working hard to end the gender gap in STEM. She thinks that women empowerment groups on campus greatly impact students’ lives in the long term.

Compared to her previous school, Edminston said Harvard-Westlake is more aware of gender issues on campus, specifically female involvement in STEM courses. However, improvement still need to be be made, she said.

“A lot of girls will say things like , ‘I’m not good at science,’ and then do an experiment and kick butt, but they just don’t realize it,” Edminston said. “They think they’re not supposed to be good at science, so they’re not. People don’t recognize that it’s still a problem, and that’s also a problem. In reality, there’s still a lot of progress to go.”