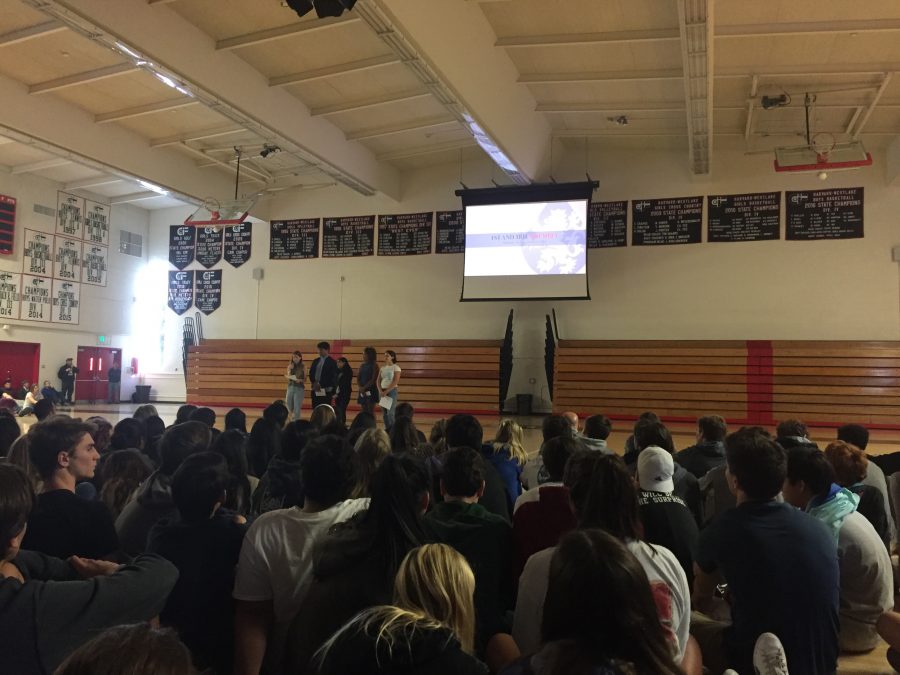 Carmen Levine '17, Daniel Varela ’18, Sohni Kaur '17, Anya Andrews '17 and Dana Anderson '17 (left to right) present a video including anonymous quotes heard around campus that use offensive language. These students are working to combat this kind of language on campus. Credit: Maddy Daum/Chronicle

Anonymous quotes heard around campus involving offensive language toward race, gender and sexuality flashed against a black screen at Wednesday’s assembly. Student club leaders produced the video to spread awareness of microaggressions on campus and start a movement to stop derogatory language.

Anderson, Andrews and Varela spoke at a faculty meeting Wednesday to inform those in attendance of the impact that they anticipated the video would have. The club leaders answered questions and explained their project in detail.

Andrews and Jillian Sanders ’17 created the video by compiling recordings of students reciting offensive quotes heard on campus, some included racial and homophobic slurs. Recordings took place Thursday-Monday, in which around 30 quotes were said aloud by 10 students.

The anonymous quotes included: “I wish I was black because it would be so much easier to get into college,” “Two guys in a relationship makes my stomach hurt” and “That’s a lot of STEM classes considering girls are usually so dumb.”

After presenting the video, Andrews acknowledged that reactions among students were varied. She said that some laughed at the absurdity of the quotes while others felt confused and uncomfortable. Counselors, deans and faculty members were available to talk to students after the assembly.

“Small little microaggressions like this can perpetuate a lot more negative culture, not just on campus but everywhere you go” Kaur said. “One of the first steps to stopping hate crimes based on gender, race or sexuality is to be accountable for our actions and stop what we’re seeing.”

As a follow-up project, students will take pledges in their class meetings and Choices and Challenges classes to stop offensive language heard on campus. Those interested in joining this movement can contact the club leaders who are leading this project.

“Becoming more informed is an ongoing process so hopefully this encourages more people to begin that process if they haven’t already,” Anderson said. “Harvard-Westlake holds itself to a higher standard of respect for our peers, but too often we find that language like we showed in the video is part of the norm. We need to try to be the most inclusive community that we can be, and in order to do that we need to continue our education about other cultures and communities, not so that we can feel better about ourselves, but so that students can feel safe and comfortable on campus.”

Tali Perluss ’18 said she appreciated that members of the school community took it upon themselves to fix an ongoing issue.

“It was really surprising that kids at our school would ever say things like that, but I think it’s really good that this topic was brought to the attention of the school because it clearly needs to be addressed,” Perluss said.