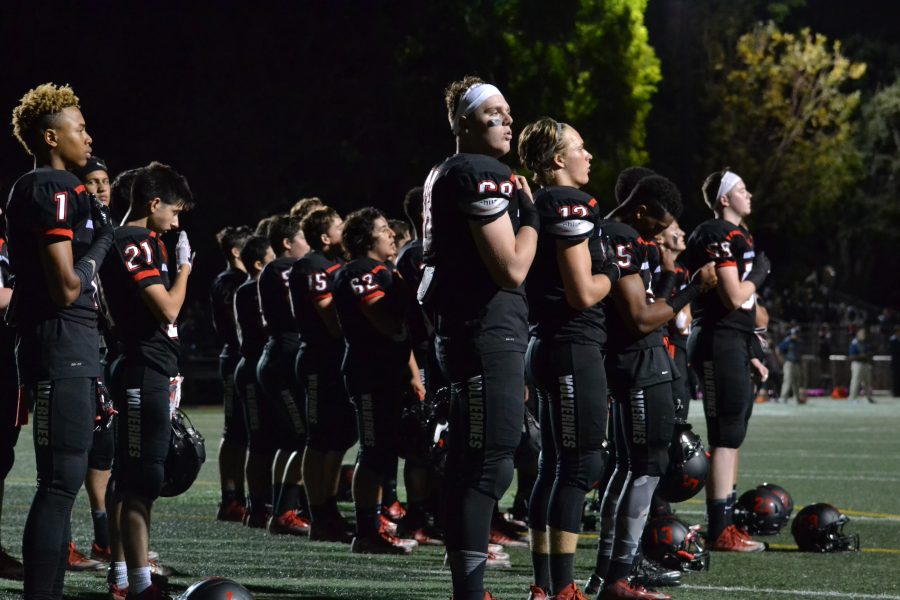 Liam Douglass '18 and the football team looks on during the playing of the national anthem. Credit: Aaron Park/Chronicle

The football team spent its season adjusting to a lineup filled with underclassmen. They finished with a final overall recorded of 3-8 and a league record of 0-5.

“Our team was extremely young with multiple sophomores and freshman starting on all phases of the game,” Captain Odin Hernandez ’17 said. “However, as the season went on we started to lose those class distinctions as we all went through the same hardships, and by the end of the season we were all equals on the field, no matter the age.”

After losing 56-28, the players’ season ended in the first round to Calabasas on Nov. 11.

“I am most proud of the fact that in the final game, though the odds weren’t with us, we went down swinging, giving it our all— a complete reversal from the previous games,” Hernandez said.

The team said its biggest issue was becoming too caught up in its past problems instead of focusing on playing in the moment.

“In games prior, when something went bad we allowed it to grow, leading to more and more mistakes instead of moving on,” Hernandez said. “Essentially, we were our own worst enemy.”

Looking forward to the next season, Football Program Head Scot Ruggles said that the experience gained by the team this year will hopefully lead to greater success in coming years.

“The future of the football program is bright and I am excited to put the pieces in place to make that happen,” Ruggles said.

The players are also looking to use this year’s lessons to grow as a team in the future when they are older and know more about the sport and how to work together.